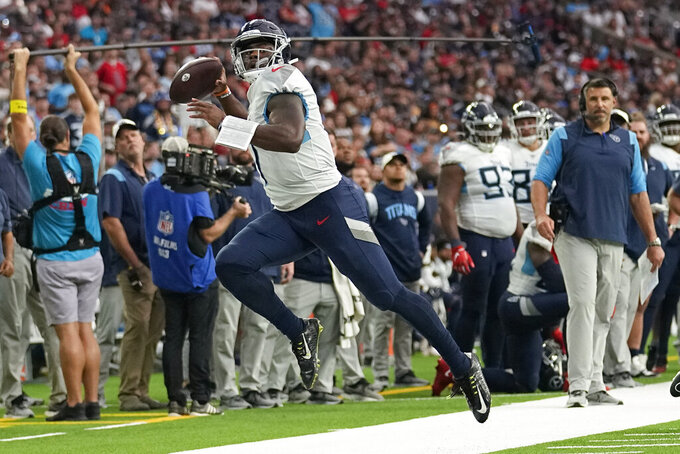 Tennessee Titans quarterback Malik Willis throws the ball as he jumps out of bounds during the second half of an NFL football game against the Houston Texans Sunday, Oct. 30, 2022, in Houston. (AP Photo/Eric Gay) 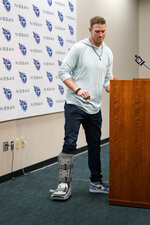 NASHVILLE, Tenn. (AP) — How Ryan Tannehill can tolerate the pain in his sprained right ankle will determine if the Tennessee quarterback misses a second straight game or is back in the lineup Sunday night when the Titans visit Kansas City.

“The pain is going to be there,” Tannehill said Wednesday. “That is just kind of where we’re at with it. Unfortunately, with the nature of the injury it kind of is there. It is just a matter of if I can do my job or if I can’t.”

Tannehill said part of trying to get himself ready is working back slowly after having a weekend off.

The quarterback is continuing to get treatment and the Titans are monitoring his progress daily to see how he can move around. He has to be able to protect himself by moving around in the pocket.

Missing last week's 17-10 win in Houston wasn't easy for the 11-year veteran who snapped a 49-game start streak for Tennessee. Tannehill said it was surreal and weird watching his teammates play on TV without him.

“It didn’t feel right at all,” Tannehill said. “My kids were asking, ‘Why are you yelling at the TV? You don’t usually yell when you watch football.’ I was like, ‘Yeah well, this one means a little bit more.’ It was not a good feeling and not something I want to make a habit of, that is for sure.”

Tannehill talked to reporters with his ankle heavily taped after a walk-through, and the Titans (5-2) listed the quarterback as limited even though he was not on the field during the portion open to reporters.

"We will see how it goes as he continues to work through preparation and see how he feels," Titans coach Mike Vrabel said before practice.

Tannehill wasn't the only one on an injury report featuring 10 Titans. Two-time NFL rushing champ Derrick Henry, whose 32 carries in the win over Houston was the most by a running back in a game this season, was limited by a foot injury. A broken right foot hurt Oct. 31 cost Henry nine games last season.

With Tannehill staying in Nashville, rookie Malik Willis threw only 10 passes for 55 yards in his NFL debut while being sacked three times. Chiefs coach Andy Reid said they will prepare for both quarterbacks and called Willis an exciting player.

“Even though he’s young, he’s thrown a ton of balls in his time,” Reid said. We know about the ability to run, and he comes up last week and does a nice job. We’ll be ready for both of them."

Tannehill said he told Willis he was proud of the rookie and could tell how Willis was learning on the job. Tannehill lost his NFL debut with Miami — in Houston as well — despite throwing for 219 yards because he was picked off three times and sacked twice in September 2012.

“I am proud of him and the way he battled through and found a way to win,” Tannehill said.

NOTES: The Titans opened the 21-day practice window for CB Elijah Molden for a possible return from injured reserve. Molden was placed on injured reserve Sept. 9 and is hoping to be activated so he can play Sunday night.