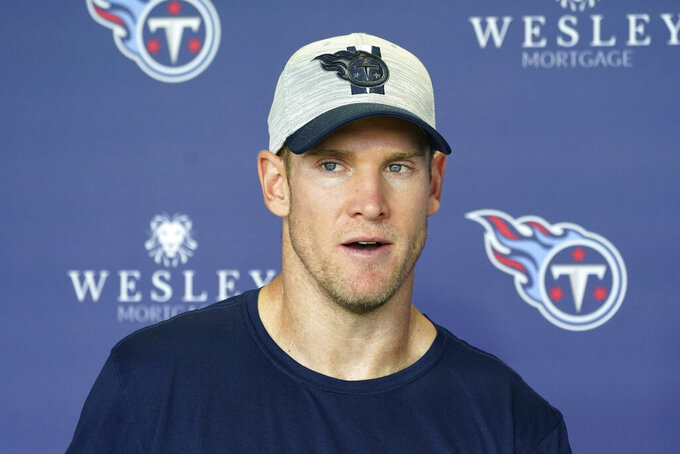 NASHVILLE, Tenn. (AP) — The questions came at Ryan Tannehill in a variety of ways Wednesday, with reporters trying to draw out any remaining emotion from the Tennessee Titans quarterback's last game.

The man starting his 11th NFL season on Sunday in the opener against the visiting New York Giants didn't bite.

Tannehill covered that in May when he revealed he needed therapy to deal with the Titans' divisional playoff loss, which featured his third interception, coming with 20 seconds left in a tied game. He also covered the same ground at the start of training camp.

“No doubt I have a burning fire inside of me,” Tannehill said Wednesday. "Yeah, there’s no question about that. But at this point, it’s a new season. What happened last year doesn’t matter. But no doubt there’s a there’s a passion and fire.”

Tannehill became the scapegoat for AFC No. 1 seed Tennessee ending its season with those three interceptions. He was one of only three starters to start every game last season. But his 30 wins since becoming the Titans' starter are the most in the first three seasons for a quarterback.

Once he takes the opening snap Sunday, Tannehill will set the franchise mark for most consecutive starts by a quarterback at 44, breaking a tie with the late Steve McNair.

He threw for 3,734 yards and 21 touchdowns last season. He also was intercepted 14 times, more than his previous two seasons combined. Tannehill also has either thrown or run for a touchdown in 16 straight games.

With two-time NFL rushing leader Derrick Henry on the roster, it's easy to ignore just what Tannehill means to the Tennessee offense. Giants defensive coordinator Don “Wink” Martindale says the Titans play to Tannehill's strengths and may be one of the best play-action quarterbacks in the NFL right now.

“That’s just how everything fits together,” Martindale said. "I have tons of respect for (offensive coordinator Todd) Downing and (Titans coach Mike Vrabel) Vrabes. They know who they are going into it, and Tannehill can run that offense like no other.”

Giants cornerback Adoree Jackson was Tannehill's teammate for two seasons in Tennessee and called the quarterback a great player.

“He’s got some dog in him,” Jackson said. “He can run the ball, throw the ball, he’s very smart, accurate with his passing. Just an overall I feel like a good quarterback in this league.”

Tannehill didn't play a snap in the preseason as the Titans went 2-1. Instead, rookie Malik Willis started all three games, which helped team officials decide to make the 86th pick overall and third quarterback drafted this April the backup to Tannehill.

That added a level of competition that hadn't existed the past two seasons with Logan Woodside, a seventh-round pick out of Toledo by Cincinnati in 2018. Woodside currently is on the Titans' practice squad.

Even though quarterbacks have been signing big contracts throughout this year, Tannehill still has the highest salary cap hit at that position in all the NFL at $38.6 million, according to Spotrac.com. The cap hit doesn't dip much in 2023, the final year of the four-year extension he signed in 2020, going to $36.6 million.

Still, Tannehill turned 34 in July, and Willis showed the ability to learn quickly during the preseason.

Asked if this season will set the course for his career, Tannehill sidestepped the question as deftly as a blitzer. He already has been traded by the team that drafted him, and his next challenge is leading the Titans to a fourth straight playoff berth and a third consecutive AFC South title.

And then try to snap a three-game playoff skid. Tannehill said he attacks each season as if it could be the last, not knowing what's going to happen next.

“You got to attack each and every day with a purpose, with an intention, being where your feet are and trying to take advantage of each and every opportunity you get,” Tannehill said.