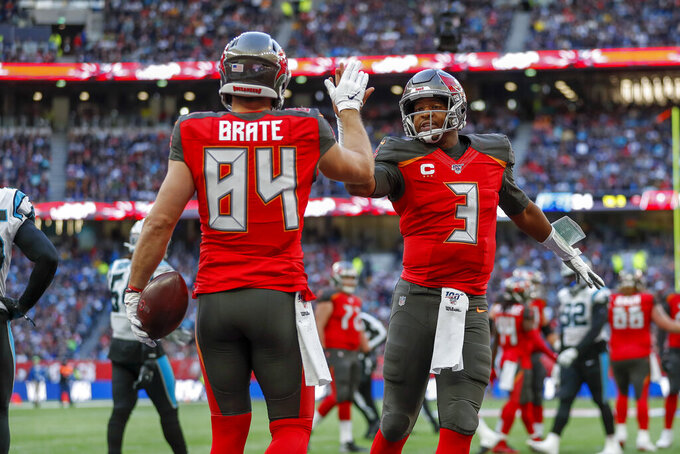 NASHVILLE, Tenn. (AP) — The Tennessee Titans are eager to see if they can put together their first winning streak of the season. Showing some consistency to stop the roller-coaster this franchise has been on too often in recent seasons would be good too.

"We have struggled in that," Titans left tackle Taylor Lewan said. "No one's shying away from the obvious up and downs that we've had the last few years. So we definitely need to focus on those things and get better each day."

The Titans snapped a two-game skid with an amazing goal-line stand to pull out a 23-20 win over the Chargers last week. Now they host the Tampa Bay Buccaneers (2-4) on Sunday trying to get back to .500 and stay close in the AFC South heading into November.

The Buccaneers come off their bye having lost two straight and three of their past four, and this is the first of a two-game road swing. Jameis Winston was intercepted five times and lost a fumble in a 37-26 loss to Carolina in London on Oct. 13. He's very eager to move on.

Bucs wide receiver Mike Evans fully expects Winston to bounce back with everyone having bad games.

The Titans are coming off a very good offensive performance in veteran Ryan Tannehill's first start replacing Marcus Mariota. They posted a season-high 403 yards, and Tannehill threw for 312 yards completing a career-best 79.3 percent of his passes. An offense that had managed one touchdown in 10 quarters scored twice in the final 13:11, and now they take on a Tampa Bay defense giving up an NFL-worst 304.5 yards passing.

"I definitely think that it was something that we can build on," Tannehill said. "Moving forward we just really need to take another step, clean up some operation things that I can be better at and we'll be in good shape."

Bucs OLB Jason Pierre-Paul is practicing again after being sidelined since suffering a neck injury in an offseason car accident. He remains on the reserve/non-football injury list but is eligible to be activated any time over the next two weeks. He says he feels good, and Bucs coach Bruce Arians has been noncommittal about whether the 10th-year pro will be ready to play against the Titans.

"I have no expectations. The moment they release me to go out there, I'll be out there," said Pierre-Paul, who led Tampa Bay with 12½ sacks last season, his first with the Bucs. "Right now, I'm good, I'm back practicing, so we'll see."

The Bucs rank fourth in the NFL scoring an average of 28.8 points a game. The Titans are the league's No. 4 scoring defense, giving up just 16 points a game. They haven't allowed any team to score more than 20 points in any game this season, tying a franchise record set in 2000.

In Pierre-Paul's absence, OLB Shaquil Barrett has taken advantage of playing an expanded role for the Bucs. The fifth-year pro, primarily a reserve with Denver the past four seasons, is tied for the NFL lead with nine sacks. He's also learning how difficult it is to get to the quarterback when opposing teams take notice. Tampa Bay's past two opponents — the Rams and Panthers — held him without a sack.

"He's in the big leagues now," Arians said. "Everybody knows who he is and where he's at."

And, would Pierre-Paul returning soon provide some relief?

"It will help a bunch if we can get it done," the coach added.

Winston has been sacked 25 times this season with 13 combined in the past two games. Tennessee is getting healthier with the debut of rookie defensive lineman Jeffery Simmons, who got a sack in his first game last week, and the return of veteran linebacker Cameron Wake. The Titans have allowed 31 sacks, though Tannehill was sacked only twice in his first start.