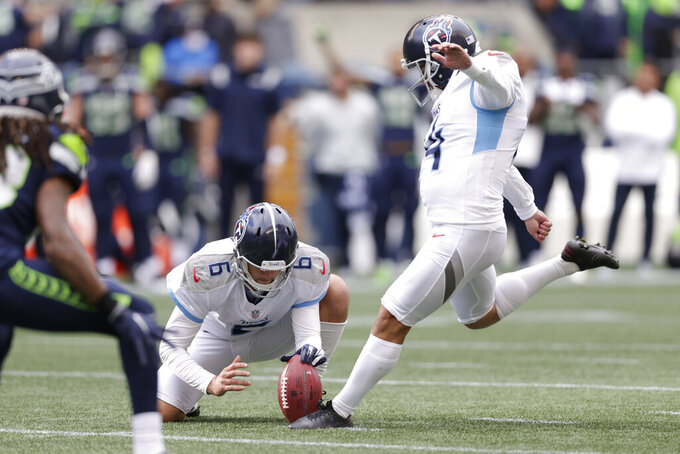 Tennessee Titans kicker Randy Bullock, right, kicks a field goal in overtime as Brett Kern holds to give the Titans a 33-30 win over the Seattle Seahawks in an NFL football game, Sunday, Sept. 19, 2021, in Seattle. (AP Photo/John Froschauer)

NASHVILLE, Tenn. (AP) — The Tennessee Titans already have a second replacement kicker on the roster with the first on injured reserve, and now they have a second punter.

Three-time Pro Bowl punter Brett Kern was limited Wednesday with an injured right groin muscle that kept him from practicing Thursday. So the Titans signed punter Johnny Townsend to the roster Thursday.

“With Brett obviously we wanted to bring some punters in to work out and just see what's going on," Aukerman said. “Obviously Johnny had a good workout for us today, so we'll end up seeing what he can do and see how Brett progresses throughout the week.”

The Titans went through this last season when Kern went on injured reserve, and they brought in Ryan Allen, who kicked in one game. Trevor Daniel played in two before Kern returned.

Aukerman said it is difficult when a guy comes in because Kern also holds on field goals and extra points.

Townsend played at Florida in college and finished with the highest punting average of 46.2 yards in Southeastern Conference history.