Titans try to streak into bye after climbing back to .500 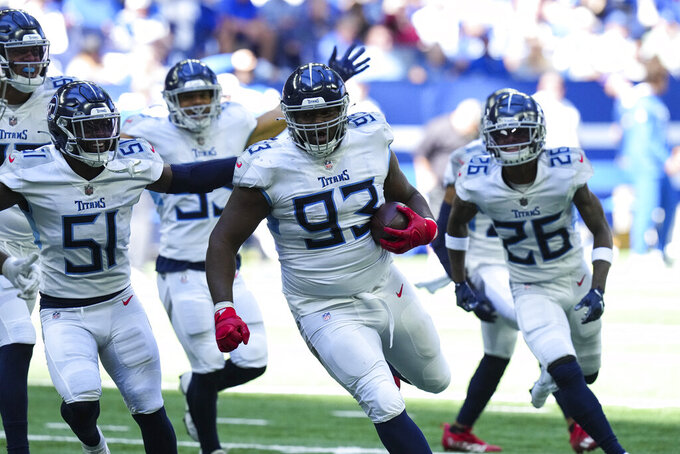 Thanks to playing in the AFC South, the two-time division champs no longer are sitting on the bottom looking up.

All they have to do now is find a way to win another road game and get to their bye without losing any more players to injuries.

“Well, this will be a huge week for us,” Titans coach Mike Vrabel said Monday. “I mean, we can’t look ahead. We have to focus on going into Washington and preparing this week and finding out who’s available.”

The Titans (2-2) held off the Indianapolis Colts 24-17 for their fourth straight win in this division rivalry and fifth in the past six. Derrick Henry ran for 114 yards for his first 100-yard rushing game this season and finished with a combined 147 yards.

“There’s plenty of things that we need to fix, and we will,” Vrabel said.

The Titans have started each game by driving for a touchdown. Against the Colts, they topped themselves by scoring on each of their first four possessions. Veteran wide receiver Robert Woods, their offseason trade acquisition from the Super Bowl champion Rams, got his first TD catch this season.

Henry, the two-time NFL rushing champ, had his best game yet this season by halftime with 99 yards rushing. He should have had a second rushing TD that was wiped out by a holding penalty on rookie wide receiver Treylon Burks.

The second half. The Titans now have been outscored 64-7 after halftime and haven’t scored a single point since the third quarter of their season opener. Their scoreless stretch has reached seven straight quarters in the second half of games.

The Titans’ offensive struggles reached a new level against the Colts as they were outgained 199-28 in the second half. They opened the second half with three straight three-and-outs.

Rookie Roger McCreary. The cornerback out of Auburn looked like a luxury pick at No. 35 overall with the Titans already having Kristian Fulton, a second-round pick in 2020, and 2021 first-round selection Caleb Farley along with third-rounder Elijah Molden.

McCreary has started every game this season. Against the Colts, he was one of four defenders to play every snap and ranked second in tackles.

Farley. At least the 2021 first-round pick got on the field for 27 snaps against the Colts, a big improvement from the previous game. But he’s coming off the bench with Terrance Mitchell and Andrew Adams, a pair of recent pickups off other teams’ practice squads, both starting.

Burks was on crutches with his left foot in a walking boot after the game. Vrabel said Monday that they still were evaluating the 18th pick overall and he didn't know how long the rookie will be out. NFL.com reported Burks has turf toe, but wouldn't need surgery.

OLB Bud Dupree returned after missing the previous game with an injured hip and lasted only nine snaps before leaving the game again. He did recover a fumble. ILB Monty Rice, who started the season on the physically unable to perform list, might return to practice this week.

Vrabel said he didn't expect either WR Racey McMath nor CB Elijah Molden to start practicing this week. Both have spent the minimum of four games on injured reserve, allowing the Titans to have them to start practicing if either are among the eight players allowed to be brought back this season.

0 — The Titans climbed back to even in turnover margin after not turning the ball over in Indianapolis. The defense came up with an interception and recovered two fumbles.

Survive their next road trip to Washington, climb above .500 and use the bye to rest and heal up.

It’s not great that the break comes five games into the season, but the banged-up Titans need to catch their breath before hosting Indianapolis on Oct. 23 followed by another pair of road games at Houston and at Kansas City.