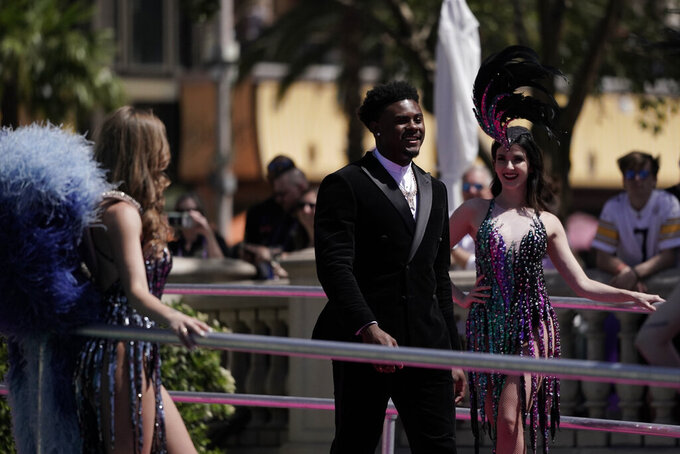 NASHVILLE, Tenn. (AP) — The Tennessee Titans say they need to be excellent around Ryan Tannehill to help their quarterback take them on the deep postseason run they've missed since the 2019 season.

How big a step they've taken this offseason remains to be seen. They certainly did their best, using six of nine selections in this NFL draft on offense to give Tannehill more protection and passing targets for a team that went 12-5 last season and earned the AFC's No. 1 seed.

“We'll see how it goes ...,” general manager Jon Robinson said Saturday after wrapping up his seventh draft. “I feel really good about where we're at with the football team. We'll continue to look and add.”

The three-day draft started in stunning fashion with the Titans trading away a Pro Bowl wide receiver after A.J. Brown asked to be moved after cutting off communications with team officials and promising to stay off the field until he got a new contract.

They sent Brown to Philadelphia where he got his high-priced extension, and Tennessee used the 18th pick to draft Brown's replacement in Treylon Burks of Arkansas. The 6-foot-3, 225-pound Burks has watched a bunch of receivers, taking bit and pieces to help him be a versatile threat.

“I really mimic myself after myself just because I feel like without being myself, I wouldn’t be in this position,” Burks said.

That was the first of three trades for Tennessee in this draft, including moving out of the 26th overall selection and moving up in the third round to select a quarterback at its highest draft spot since Marcus Mariota at No. 2 overall in 2015.

Even with trading away Brown and having released Julio Jones in March, the Titans appear better on offense after grabbing Brown's replacement in Burks. He should slide into the starting lineup immediately opposite Robert Woods, the veteran Tennessee sent a 2023 sixth-round pick to the Rams for in March.

They also are deeper at tight end having signed Austin Hooper, a two-time Pro Bowler in his final two seasons in Atlanta. They drafted Chigoziem Okonkwo out of Maryland at No. 143 with their second pick in the fourth round whose 4.52-second time in the 40-yard dash was the fastest at his position at the NFL combine.

With his speed up the seam, Okonkwo has been compared to Jonnu Smith, the tight end that left the Titans in March 2020 for a big payday in New England. Tennessee tried replacing Smith by bringing back Anthony Firkser, but he never came close to replacing Smith's production.

Hassan Haskins, a fourth-round choice at No. 131 out of Michigan, provides depth behind Derrick Henry and the ability to play on all special teams. The Titans also added a 5-11 receiver Kyle Phillips out of UCLA in the fifth round.

The Titans insisted trading up four spots to select Malik Willis from Liberty and making him the third quarterback off the board in this draft was simply taking the best player available at No. 86 in the third round.

Tennessee is committed to Ryan Tannehill this season with the veteran, who turns 34 in July, having the NFL's highest salary cap number this season. He was intercepted 14 times, the most since his second year in the NFL. That doesn't count his three interceptions in the divisional loss.

The pressure this offseason will be on Logan Woodside, who has backed up Tannehill the past two seasons with little competition for the spot.

They also used the first of their two sixth-round selections on safety Theo Jackson, a Nashville native who grew up attending Titans' games in his uncle's luxury suite before playing at the University of Tennessee.

The Titans currently have two open jobs on the line with left guard Rodger Saffold a salary cap casualty in March and right tackle David Quessenberry not tendered as a restricted free agent. Tennessee used the 69th pick overall in the third round on Nicholas Petit-Frere from Ohio State.

He joins Dillon Radunz, their second-round pick out of North Dakota State a year ago, and free agent signee Jamarco Jones competing for those two open spots. The Titans will be looking to better protect Tannehill after he was sacked 47 times in 2021.