Titans will have to get creative without NFL rushing leader 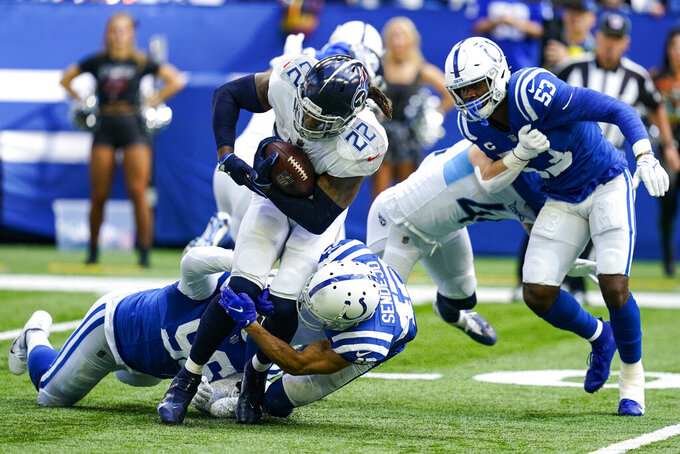 Tennessee Titans running back Derrick Henry (22) is tackled by Indianapolis Colts safety Andrew Sendejo (42) in the second half of an NFL football game in Indianapolis, Sunday, Oct. 31, 2021. (AP Photo/Darron Cummings)

NASHVILLE, Tenn. (AP) — The Tennessee Titans have had plenty of experience dealing with injuries this season and now must adapt to their biggest challenge yet.

No Derrick Henry for the foreseeable future.

Nobody will be able to truly replace the man who led the NFL in rushing each of the past two seasons, became only the eighth to run for at least 2,000 yards in 2020 and had a big lead to three-peat as the league's rushing champ again this season.

The timing couldn't be much worse.

Winners of four straight, the Titans (6-2) sit atop the AFC and just grabbed a stranglehold on the AFC South they won last season. They have a three-game lead and the tiebreaker with only their third season sweep of the Indianapolis Colts with a 34-31 overtime win.

They also have Vrabel, who has shown repeatedly in his coaching tenure the ability to adapt to injuries by diving into the playbook for trick plays or anything else that can help the Titans win. He and his assistants will be busy until Henry returns — whenever that is.

The run game. But with Henry out, the Titans were finalizing a deal Monday to bring in 2012 MVP and four-time All-Pro Adrian Peterson to stock up a position that leaned heavily on the man who carried the ball more than anyone else in the league since the start of the 2019 season.

The Titans still rank fourth, averaging 147.6 yards rushing per game. Since much of that came from Henry, it will be a challenge moving forward for the Titans.

Pass protection. Tannehill was sacked three times by the Colts and has been sacked 24 times this season. Only Chicago, Seattle and Denver have allowed more sacks.

If the Titans give Tannehill time, he is 26-12 as a starter and just led his 12th game-winning drive in the fourth quarter or overtime since arriving in Tennessee. Tannehill threw a career-high 33 TD passes last season.

Brown. The 2020 Pro Bowl wide receiver has put together his best two games over the past two wins, and he has the physical skills to do whatever the Titans ask of him. On a trick play against the Colts, Brown was set to throw early in the fourth quarter before throwing the ball away under pressure.

“It was a wonderful decision,” Vrabel said. “It was a great job avoiding the tackle for loss. The nickel did a nice job of triggering. We thought we could take advantage of that. We just didn’t execute it. What we did do was we saved that play. A.J. smartly and wisely threw that ball away.”

Safety Kevin Byard. He drew a defensive pass interference penalty that allowed the Colts to tie the game late in regulation. But the veteran also intercepted Carson Wentz in overtime to set up the game-winning field goal, Byard's fourth pick this season ties him for second in the NFL.

The Titans are banged up. Not counting Henry, they had 16 players on the injury report before playing the Colts in a very physical game.

The Titans continue the toughest stretch of their schedule with the visit to Los Angeles. Then they host the Saints (5-2) who are dealing with their own big injury.

After that, the schedule eases tremendously. The Titans face the NFL's three teams currently with only one win in Miami and Jacksonville with two games remaining against Houston (1-7). Their other two opponents, New England (4-4) and Pittsburgh (4-3), are hovering around .500.