Tomlin: time for Steelers to put up and shut up 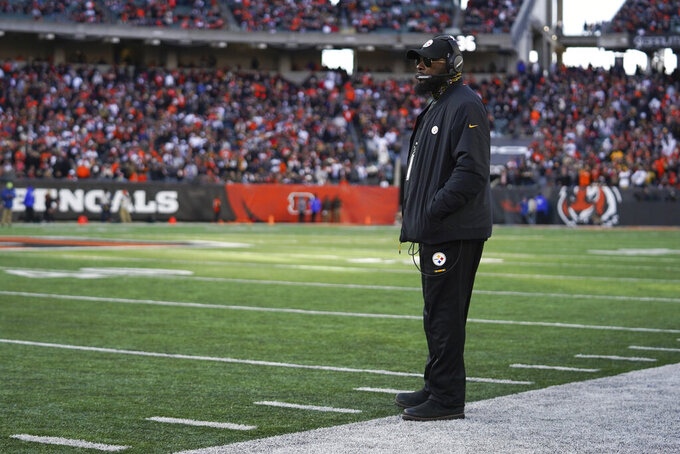 Pittsburgh Steelers head coach Mike Tomlin watches as his team plays against the Cincinnati Bengals during the second half of an NFL football game, Sunday, Nov. 28, 2021, in Cincinnati. (AP Photo/Jeff Dean)

PITTSBURGH (AP) — Mike Tomlin believes it's time for the Pittsburgh Steelers to put up and shut up.

Emphasis on shut up.

Neither does laying an egg in Cincinnati, something the Steelers (5-5-1) did during a stunningly one-sided blowout loss to the Bengals that left players embarrassed and Tomlin fuming.

While the longtime head coach has calmed down a bit, he's well aware his team needs to improve and improve quickly if it wants to have any chance at being a factor as Christmas nears.

Tomlin said he is “open to all things” when it comes to figuring out how to fix a defense that's given up 41 points in back-to-weeks. That means both switching up personnel and the game plan, though that is something that players can only fix internally, something Tomlin has no control over once the ball is snapped.

“(It's) that man vs. himself battle,” Tomlin said. “We've got to challenge ourselves and we've got to dig down deep and be at our best to meet those challenges.”

Something Pittsburgh failed to do repeatedly against the Bengals. If Cincinnati's offense wasn't mauling the Steelers' injury-riddled defense, then the Bengals' defense was bullying Pittsburgh's overmatched and rookie-laden offense.

Tomlin allowed it will take time for his team to wipe off the stench, adding they can't forget it, but must move past it with AFC North-leading Baltimore (8-3) visiting Heinz Field on Sunday. Of primary concern is a run defense ranked 28th in the league, one tasked with now trying to contain Ravens star quarterback Lamar Jackson.

The Steelers have held Jackson relatively in check in two previous meetings, but will come in potentially short-handed with outside linebacker T.J. Watt in the COVID-19 protocol. The defensive line is an underachieving, underwhelming mess outside of veteran Cam Heyward, one of the reasons Pittsburgh claimed defensive tackle Montravius Adams off New Orleans' practice squad on Tuesday.

While it's unclear how much Adams could immediately contribute as he gets up to speed, Tomlin may order a padded practice — a rarity this time of year under the collective bargaining agreement rules — in hopes his team will rediscover the physicality that's been lacking lately.

“Given our circumstances, (putting on pads) is something that could change this week in an effort to position us to play a better brand of football,” he said.

A brand that used to be the standard in Pittsburgh. Not this season. Quality depth along the defensive line has been an issue all year. Defensive tackle Tyson Alualu was lost for the season with an ankle injury in Week 2 and any chance of veteran Stephon Tuitt returning from knee surgery over the summer seems to be dwindling.

Tomlin did not offer an update on Tuitt's status on Tuesday, but with just six weeks remaining and Tuitt yet to be cleared to practice, time is ticking. Just as it's ticking on Pittsburgh's shot at being a factor in the AFC North.

The Steelers have already been swept by the Bengals, and a loss to the Ravens would all but slam the door on any chance at winning a division that's been wildly uneven. All four teams have impressive wins on the resume, as well as baffling losses or in Pittsburgh's case, an ugly 16-16 tie to still-winless Detroit.

“This is a ridiculously big game and so it requires our time and attention,” he said.

Tomlin sent the same message before the Steelers headed to Cincinnati, and it seemed to make no impact as Pittsburgh suffered the kind of beatdown it has so regularly given to the Bengals for so long. Former players have made their frustration public, including former fullback Rocky Bleier, who said the Steelers “lack pride.”

While Tomlin regularly urges his players to block out outside noise, he allowed it's different when that noise comes from those who are intimately familiar with the franchise’s internal expectations.

“They would know. You know, they know the things that we value,” Tomlin said. “I don’t know specifically what (their issues are), but guys that have been here, guys have been in that room, guys that understand the standards that we aspire to, they probably have a better understanding of that than anybody ... And so I would imagine whatever it is (they are saying), I agree with them.”

“Claypool plays wideout and I’ll let him do that,” Tomlin said. “I’ll formulate the practice approach, and I think that division of labor is probably appropriate.”

NOTES: Tomlin declined to say whether Watt tested positive for COVID-19 or if he is symptomatic. ... Rookie TE Pat Freiermuth remains in the concussion protocol. ... Tomlin did not speculate on whether TE Eric Ebron or OL J.C. Hassenauer, both of whom went on injured reserve last week, will return this season.