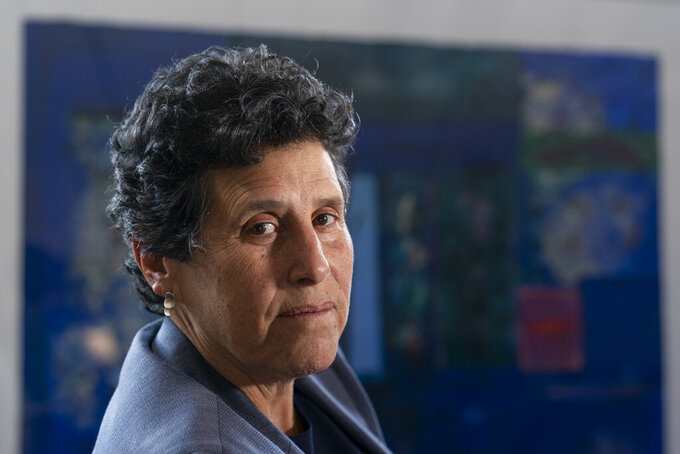 In this March 11, 2021, photo Debra Katz, an attorney for Charlotte Bennett, a former staffer who has accused New York Gov. Andrew Cuomo of workplace sexual harassment, poses for a picture at her office during an interview with the Associated Press in northwest Washington. (AP Photo/Manuel Balce Ceneta)

She’d just upended her life by going public with sexual harassment allegations against New York Gov. Andrew Cuomo. And Charlotte Bennett, a former aide to the governor, realized that Saturday night in February that she had no plan for what came next. She was 25 years old, and had never been in the media spotlight. How would she deal with the fallout, both publicly and personally?

She didn’t have long to wonder. The next morning, an email arrived from Debra Katz, the same civil rights attorney who’d represented Christine Blasey Ford, accuser of Supreme Court Justice Brett Kavanaugh, along with accusers of Hollywood mogul Harvey Weinstein and countless other powerful men accused of sexual misconduct, most of it along with her professional partner of 20 years, Lisa Banks.

“How are you holding up?” Katz asked Bennett when they connected. Did she have support or advice? Not really, Bennett said.

“This case is literally why I do this work,” Katz explained, assuring her she'd represent her on a pro bono basis. “It’s why I exist. Let’s do this.”

For many people, the pandemic year has brought a pause of some kind, or at least a slowdown, to their professional endeavors. For Katz and Banks, the opposite has been true. “This is probably the biggest year we’ve ever had,” says Banks.

Their work has actually been increasing for nearly four years. When the Harvey Weinstein revelations erupted in October 2017, launching the reckoning that became known as the #MeToo movement, it caused a "sea change," Katz says.

“We were inundated — not only by live cases but by cases of people who were harassed decades ago but wanted to report the issues now, because the person who harassed them was still in the same perch," she says.

Katz and Banks each carry several dozen active cases at a time — everything from informal advice to full-blown litigation. They consult each other constantly, beginning and ending each day with a conversation, and discussing cases during frequent hikes in Rock Creek Park. Banks notes they jokingly call themselves Batman and Robin — she’s Robin, because she’s a decade younger.

It is, clients and associates say, an effective partnership — two very different personalities with shared goals.

At the toughest moments, they’ve also shared death threats: During the Kavanaugh hearings, armed guards were posted 24-7 outside their homes and at work, and their cars were checked underneath for explosives. They each struggled to explain to their families, without scaring the kids, why security was necessary.

Katz is known as the more fiery in temperament, Banks the cooler. Whistleblower Rick Bright, a federal scientist who was forced out of his job during a dispute over an unproven coronavirus treatment pushed by President Trump, says he immediately appreciated how their skills complement each other.

“Debbie is more assertive -- she’s a driver," Bright says. "Lisa walks me through the process, fills me in on what’s happening each step of the way.” When he was anxious, it was Banks who would calm him.

Katz freely admits she's the more emotional of the two, who occasionally struggles not to cry when seeing one of her clients — Ford, for example, or the Weinstein accusers — grilled about traumatic experiences.

Ford credits the duo with getting her through her gutting testimony in the Senate.

“Debbie and Lisa worked tirelessly in the summer of 2018 to advise me and to try to protect my privacy and to maintain my confidentiality,” Ford wrote in an email to The Associated Press. “When circumstances changed and my story became public, they fought hard on my behalf.”

However difficult, the case was “the most gratifying professional experience I’ve had in my career,” Katz says — even though Kavanaugh was eventually confirmed.

“I think the world changed as a result of Christine’s testimony,” Katz explains. “Conversations took place that had never taken place … in homes and schools and synagogues and in churches.. We heard from an 80 year-old woman who said, ‘I have never told anybody this but when I was in high school I was raped.’ I think courage begets courage.”

The two lawyers take comfort in the victories, and take the long view when it comes to setbacks for the movement. When Bill Cosby's conviction was overturned and he was released from prison, many worried aloud that it would have a chilling effect on victims coming forward. Katz and Banks don’t see it that way, and reminded everyone that Cosby hadn’t been exonerated.

“It’s always disappointing to see individuals like Cosby not held fully accountable,” Katz says. “But this is NOT a referendum on the #MeToo movement. And it won’t deter prosecutors from going after others when evidence indicates misconduct.”

Though Katz is the better known, neither she nor Banks is a household name like, say, Gloria Allred, the subject of her own Netflix film. But they've been handling these cases since the beginnings of their careers, inspired to fight back against sexual harassment and unequal pay that they themselves experienced.

“A take-charge activist … steeped in Washington and feminist rights,” Jodi Kantor and Meghan Twohey write of Katz in “She Said,” their book on Weinstein. She doesn't dispute the term “activist,” noting she spent “many, many hours” protesting the Trump administration. “But my political activism is separate from my legal work,” she says.

Katz, 62, started making waves as a law student at the University of Wisconsin in the early ’80s, where she left the Law Review to protest lack of diversity -- there had never been a Black student on staff. (A student magazine profile called it a "noisy exit.”) She started a women’s law journal instead.

Upon graduating, Katz won a fellowship that enabled her to work on a landmark sexual misconduct case: Meritor Savings Bank v. Vinson, in which the Supreme Court recognized sexual harassment as a category of discrimination protected by Title VII.

In her earliest jobs, Katz became known as one of the hardest workers and someone unafraid to take on unpopular causes. “I was in my 20s, and someone in their 50s called me brash and obnoxious,” Katz says. “I guess I’ve been hardwired all these years at not letting people I care about be bullied. I've never been a table pounder, but I also don’t relinquish ground.”

Bennett, the Cuomo accuser, says she feels Katz is driven by her outrage at "the very audacity of these people in power who do the things they do — and that we are the ones who have to live in fear.”

Banks, 53, attended law school at the University of Denver and spent her early professional years in the appellate division of the EEOC. She joined Katz at her previous firm, and in 2006 the two broke off and formed their own Washington employment and whistleblower firm, Katz, Marshall & Banks, as Katz was recovering from breast cancer.

One of Banks' earliest inspirations came as a little girl, when, a huge baseball fan, she told her father she'd like to play for the Boston Red Sox one day — only to be informed there were no females on the team. “It struck me as so profoundly unfair and outrageous,” she said. “It really inspired me to think about sex discrimination."

It's Banks who's taken the lead on sports-related cases, for example representing accusers of NFL receiver Antonio Brown, who was dropped by the New England Patriots amid assault allegations. Banks has seen more mixed results after spending the past year representing 40 accusers of Washington Football Team owner Dan Snyder in his sexual misconduct case. The recent NFL action against the team, fining it $10 million, was a mere "slap on the wrist," says Banks. And yet, she says her clients don't regret coming forward.

“All the sports leagues are trying to deal with this new world we’re living in," Banks says. “There’s at least an awareness that new rules apply.”

Katz and Banks acknowledge there’s been a bit of a slowdown in momentum -- partly due to the pandemic -- as the #MeToo movement moves toward its fourth anniversary. But, they say, any social justice movement is going to have setbacks along the way.

What is important now, Katz believes, is that society ”is finally asking the right questions.”

“The dialogue has changed, from does this happen to WHY does this happen, why is this going on?” she says. “And what is wrong, structurally and with our society, that being harassed and groped and assaulted — at work or in other areas — is just a condition of being female?”