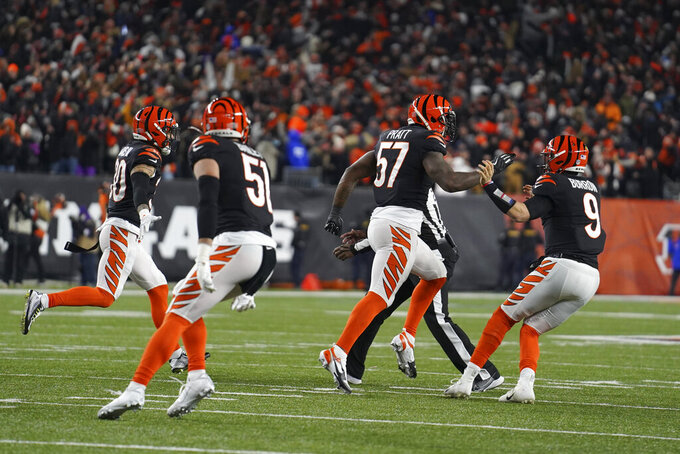 Cincinnati Bengals' Germaine Pratt (57) celebrate with quarterback Joe Burrow (9) after Pratt made an interception during the second half of an NFL wild-card playoff football game against the Las Vegas Raiders, Saturday, Jan. 15, 2022, in Cincinnati. Cincinnati won 26-19. (AP Photo/Jeff Dean)

BETTING LINE: Titans by 3 1/2, according to FanDuel SportsBook.

BENGALS PLAYER TO WATCH: QB Joe Burrow. The top pick in the 2020 draft set franchise records with 4,611 yards passing and 34 TD passes during the regular season, and his 108.3 passer rating ranked second in the NFL. He completed 70.6% of his passes for 244 yards and two TDs in his playoff debut last week. Burrow has not been intercepted in his past five starts, averaging 344 yards passing with 13 TDs in that span.

TITANS PLAYER TO WATCH: RB Derrick Henry. The 2020 AP NFL Offensive Player of the Year was the NFL's leading rusher with 937 yards when he broke his right foot Oct. 31 — and still finished ninth in the league. His 111.7-yard rushing average in the postseason is second only to Terrell Davis' mark of 142.5 yards for most in the NFL since 1970 with at least five games. And he now has fresh legs after being activated Friday off injured reserve.

KEY MATCHUP: The Titans' defense against Cincinnati's passing game. Burrow has plenty of targets with Pro Bowl WR Ja'Marr Chase setting a franchise record with 1,455 yards receiving. Tee Higgins also had a 1,000-yard season, while Tyler Boyd wasn't far behind with 828 yards. The Titans were the only NFL team with three pass rushers with at least eight sacks, and they tied for ninth with 43 sacks. All Pro S Kevin Byard had five interceptions in the regular season.

KEY INJURIES: Bengals DT Larry Ogunjobi (ankle) is out for the rest of the playoffs. Bengals DE Trey Hendrickson was cleared from concussion protocol and will play. The Titans are as healthy as they've been in months with only DL Teair Tart (ankle) questionable.

SERIES NOTES: These teams are old AFC Central rivals, and the then-Houston Oilers were the team the Bengals beat 27-14 on Jan. 6, 1991. That was the Bengals' last postseason win until last week's wild-card victory snapped a 31-year drought. The Bengals have won five of the last seven between these teams in the regular season.

STATS AND STUFF: Cincinnati went from worst to first in the division for the fifth time. It also happened in 1970, ’81, ’88 and ’90. ... The Titans won their second straight AFC South title and first No. 1 seed since the 2008 season. ... The Titans are 1-3 in the divisional round at home and have lost their last two games as the top seed. They are trying to reach their second AFC championship game in three seasons and sixth in franchise history. ... The Bengals last reached the AFC championship game in the 1988 season. They have never won a playoff game on the road, going 0-7 since 1970. ... Burrow’s current streak of 180 pass attempts without an interception is the second-longest currently in the NFL behind Packers QB Aaron Rodgers (243). Burrow’s last interception was in Week 13 against the Los Angeles Chargers. ... The Bengals haven’t lost a fumble since that game. ... The Bengals’ five road wins in the regular season were their most since winning six in 2015. ... Cincinnati became the first team in NFL history with a 4,000-yard passer, 1,000-yard rusher and two 1,000-yard receivers all under 26. Burrow and Joe Mixon are both 25, Higgins is 22 and Chase is 21. ... Bengals K Evan McPherson became the first rookie in NFL history to make four or more FGs without a miss in his playoff debut. ... The Bengals have scored on 86.5% trips to the red zone (39 TDs, 17 FGs). Their 63.9% TD rate is fifth best in the NFL. ... Chase caught nine passes for 116 yards in the win over the Raiders. ... Pro Bowl RB Mixon ranked third with 1,205 rushing yards. ... The Titans have won four of five coming into the playoffs. ... The Titans are 8-0 under coach Mike Vrabel coming off a bye or extended rest. That's tied with Pittsburgh for the NFL's best mark since 2018. ... Tennessee went 8-3 against teams with a winning record, becoming the NFL's first team with eight such wins in the league's first 17-game season. ... The Titans went 4-0 against teams that reached the divisional round, the best mark among teams still playing. They beat the Bills, Chiefs, Rams and 49ers. ... Tennessee went an NFL-best 6-1 in games decided by three points or less during the regular season. ... The Titans ranked fifth averaging 141.4 yards rushing per game. They ranked second in run defense, allowing 84.6 yards per game. ... Tennessee QB Ryan Tannehill threw for 3,743 yards and 21 TDs this season. He is the NFL's only QB with seven or more rushing TDs in each of the past two seasons. ... WR A.J. Brown led the Titans with 63 catches for 869 yards and five TDs. ... WR Julio Jones needs at least 50 yards receiving to tie Wes Welker as the only players with at least 50 yards receiving in each of his first nine playoff games in his career. ... OLB Harold Landry had a career-high 12 sacks.