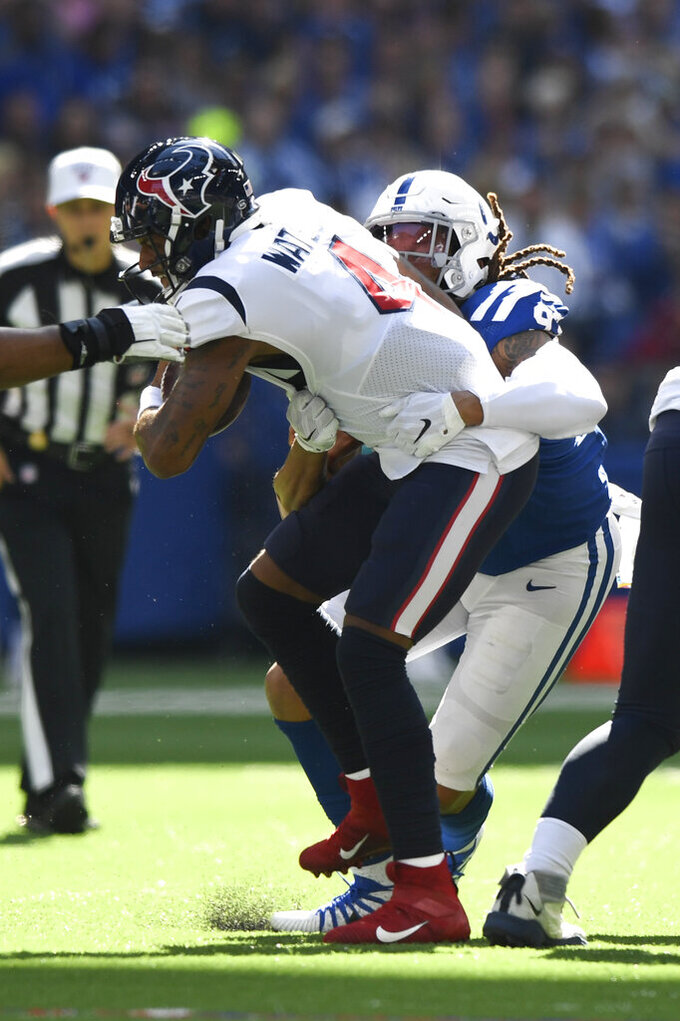 Moments after appearing to avoid a sack with an incredible throw to DeAndre Hopkins in the end zone, referee Tony Corrente announced the touchdown had been negated. The explanation: Colts defensive end Justin Houston was draped around Watson's lower legs and was pulling him to the ground so the officials ruled Watson it a sack.

"I went back and forth with the ref," Watson said following the Texans' 30-23 loss at Indianapolis. "He said I was down. He said he was trying to protect my health so it goes back and forth, but that's the call he made."

It cost Houston 9 yards, forced it to trade a touchdown for a short field goal instead of taking the lead and there was nothing the Texans (4-3) could do but accept it.

Afterward, Watson acknowledged the rare in the grasp call made a "big difference" as the Texans spent most of the day trying to rally for their fourth win in Indianapolis in five tries.

But the one call certainly wasn't the only obstacle Houston (4-3) had to deal with Sunday.

The Texans settled for field goals on each of their first three red-zone trips, including the touchdown that was called back. Watson threw away two more scoring chances with fourth-quarter interceptions. The second, off the hands of receiver Keke Coutee, was snared by All-Pro linebacker Darius Leonard with 26 seconds left to seal the outcome.

Houston also turned the ball over on downs near midfield early in the fourth quarter and the Colts accepted 10 penalties, three of which extended the Colts final scoring drive. Indy (4-2) burned nearly 7 ½ minutes on that 12-play possession that made it a 28-16.

If that wasn't enough to stomach, the Colts even won a challenge after replays showed Eric Ebron got both feet down in front of the end line on a remarkable one-handed catch for a 4-yard scoring pass. That gave Indy a 21-9 lead early in the third quarter.

While nobody voiced any criticism of the calls publicly, the Texans seemed nearly as frustrated with what happened Sunday as many other teams, coaches and fans around the league have been with the officiating over the first seven weeks this season.

But O'Brien and his players understand that talking about it won't help. The only real solution is fixing the mistakes.

"We are definitely going to work to correct them," three-time defensive player of the year J.J. Watt said when asked about the penalties. "I haven't watched the film yet so I can't say what — we will have to watch the film and see what we can correct."

Heading into Sunday, it appeared the Texans had found some solutions for their early season flaws.

Watson endured six hits and was sacked three times, going 23 of 34 with 308 yards and only one touchdown. Hyde was the top runner with 12 carries for 35 yards, and the Texans now find themselves sitting in second place in the AFC South with three straight losses to the Colts.

And it won't be easy to accept this one.

"You have to give the Colts credit, they handled what they needed to handle," Watson said. "We didn't execute enough to be able to capitalize. We have to take our game to another level and go back to the drawing board and get ready for the Raiders."