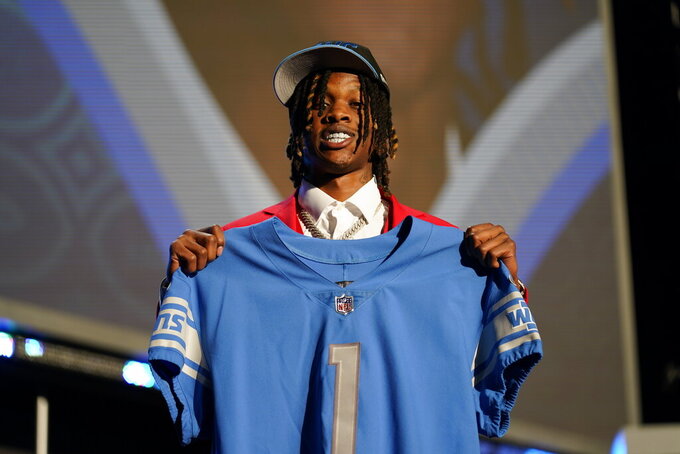 Alabama wide receiver Jameson Williams holds a jersey after being chosen by the Detroit Lions with the 12th pick of the NFL football draft Thursday, April 28, 2022, in Las Vegas. (AP Photo/John Locher)

EAGAN, Minn. (AP) — Trading down 20 spots in the first round like the Minnesota Vikings did on Thursday night means having to watch a lot of instant-impact talent come off the board.

The move to bolster their second-day pick allotment at the expense of passing on the No. 12 overall selection came down to a simple decision by the Vikings that they were better off stocking up than staying put.

Georgia safety Lewis Cine was the result, bringing the potential reward of a hard-hitting, sure-tackling, well-respected player from a dominant defense on the most recent national champions.

The Vikings under new general manager Kwesi Adofo-Mensah began the NFL draft with their highest first-round pick in six years and packaged it with the 46th overall selection in the second round to division rival Detroit for the for the 32nd, 34th and 66th overall selections.

The catch from the 20-spot slide in the first round for the Vikings was an early third-rounder and a 12-spot jump in the second round.

Adofo-Mensah worked his way up in the NFL in research and development, and the draft trade charts he might have calculated in past roles with San Francisco and Cleveland are ready available to give him a grade on the value of the deal. But the former Wall Street trader with degrees from Princeton and Stanford wasn't worried as much about that.

“It’s really the same thing as economics: It’s how happy are you in this outcome versus this outcome?” Adofo-Mensah said.

The 6-foot-2, 199-pound Cine (pronounced SEEN) was one of several defensive standouts for the national champion Bulldogs in 2021. He was a third team Associated Press All-American, after leading the team with nine pass breakups and 73 tackles. He had one interception in 15 games.

Cine was the fifth defensive player from Georgia taken in the first round, an NFL record for one school. Linebacker Quay Walker (22nd) and defensive tackle Devonte Wyatt (28th) both went to NFC North rival Green Bay.

“Day in and day out, it’s competition, going with the best that the country has to offer,” Cine said.

Midway through a trade-filled first round full of twists and turns, the Lions used the No. 12 pick for Alabama wide receiver Jameson Williams, a potential superstar who slipped a bit because he's recovering from a torn ACL. Cine and his teammates in the secondary will be tasked with covering Williams twice per season.

“He was one of our favorite players in the draft, but we've got a pretty bad dude on our team and we can add other pieces on the other side, and they've got to play the Minnesota Vikings,” Adofo-Mensah said, referring to star Justin Jefferson.

There was a hard run on wide receivers in the first round, plus a couple of headliner trades of veterans, but the Vikings took themselves out of that mix with the trade. Jefferson has put his name all over the team and league record books over his first two years, but stalwart Adam Thielen will be 32 before the season starts and will likely need a replacement sooner than later.

The Vikings have six-time Pro Bowl pick Harrison Smith entrenched at one safety spot, but he's 33. Cam Bynum, a fourth-round selection in 2021, had a promising rookie season and would've been in line to start at the other spot until Cine entered the picture. The Vikings could've also snagged Notre Dame star Kyle Hamilton at No. 12, before they decided to move down. Hamilton went at No. 14 to Baltimore.

In pre-draft meetings with Georgia players, Vikings coaches often heard Cine's name when they'd ask the Bulldogs which teammate they would bring with them the NFL if they could pick one.

O'Connell said he could “absolutely” see a scenario with Smith, Cine and Bynum on the field at the same time, with perhaps one of them in slot coverage in a bulked-up nickel package. Versatility from the safety spot is a key goal for new defensive coordinator Ed Donatell's scheme.

This is the first draft for Adofo-Mensah and O'Connell, the fresh-faced new leaders of a franchise still seeking a Super Bowl title entering its 62nd season in the league.

Rick Spielman took charge of the draft room in 2007 and was given the general manager title in 2012, until being fired along with head coach Mike Zimmer about 3 1/2 months ago following an 8-9 finish for the Vikings in 2021.

With only one quarterback (Kenny Pickett) taken in the draft on Thursday, the Vikings — who gave Kirk Cousins a one-year contract extension and an additional $35 million — could get plenty of calls from teams interested in a prospect like Malik Willis, Desmond Ridder, Sam Howell or Matt Corral.