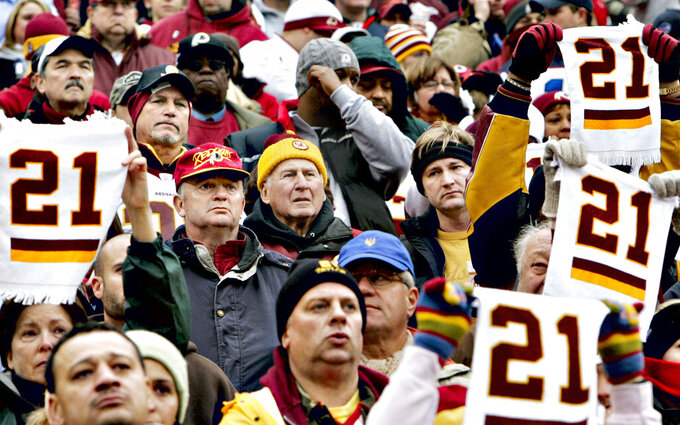 FILE - In this Dec. 2, 2007, file photo, solemn football fans hold up towels with No. 21 in memory of slain Washington Redskins safety Sean Taylor during a ceremony before an NFL football game against the Buffalo Bills at FedExField in Landover, Md. The Washington Football Team plans to retire late safety Sean Taylor's number before its upcoming game against Kansas City. (AP Photo/J. Scott Applewhite, File)

Washington has previously promoted jersey retirement ceremonies months in advance, most recently in June for Bobby Mitchell's night in September. The announcement of Taylor's No. 21 being retired came three days before Washington hosted Kansas City on what the team calls homecoming weekend.

The team said in a statement this has been in the works since before the season and apologized to fans for the lack of notice. President Jason Wright also took to Twitter to apologize.

“We wanted to do something long overdue by retiring players’ numbers,” Wright tweeted. “Months ago we planned for Bobby Mitchell and Sean Taylor to be the first two. Seeing the reaction, I’m very sorry that the short notice does not properly reflect the impact Sean had.”

Washington’s head athletic trainer is on administrative leave for what a team spokesman called an ongoing criminal investigation unrelated to the club after federal authorities, including agents from the U.S. Drug Enforcement Administration, searched the practice facility Oct. 1.

Former employees are also calling for the NFL to release the findings of an investigation into Washington workplace misconduct after emails from Jon Gruden led to the Raiders coach’s resignation.

“If the NFL felt it appropriate to release these offensive emails from Jon Gruden, which it obtained during its investigation into the Washington Football Team, it must also release the findings related to the actual target of that investigation,” said lawyers Lisa Banks and Debra Katz, who represent 40 former Washington employees.

"Our clients and the public at large deserve transparency and accountability. If not, the NFL and Roger Goodell must explain why they appear intent on protecting the Washington Football Team and owner Dan Snyder at all costs.”

The NFL did not release a written report of the investigation, which led to a $10 million fine for the organization but no formal suspensions.

Taylor was murdered at his home during a botched robbery attempt in 2007, midway through his fourth NFL season. His hard-hitting style, including decking a punter in the Pro Bowl, made him a fan favorite.

“He made you want to play for Washington, for sure,” said reigning Defensive Rookie of the Year Chase Young, who grew up rooting for the team. “I wish he was still here.”