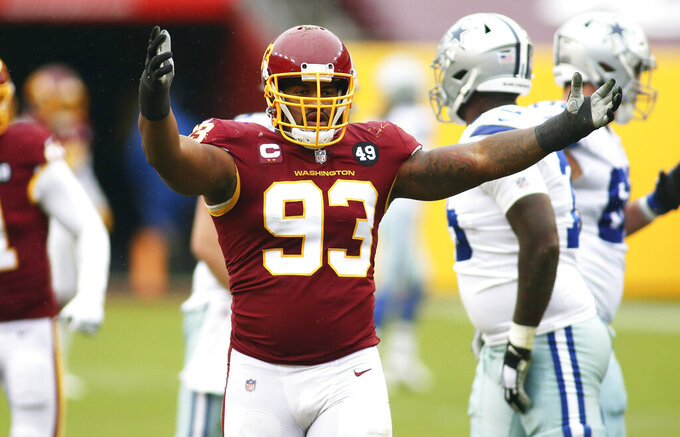 RICHMOND, Va. (AP) — Any worries about Jonathan Allen going into the final year of his contract without a long-term deal have evaporated on the eve of Washington training camp.

Allen and the team agreed to terms on a $72 million, four-year contract extension with a $30 million signing bonus, according to his agency. Team IFA and agent Blake Baratz announced the terms of the deal in a Twitter post Monday.

Players are set to report to camp Tuesday with the first practice session set for Wednesday. There are still plenty of questions surrounding Ron Rivera's team, but now Allen's future is not one of them.

Allen had one year left on his contract at just over $10 million. There was some concern he’d be franchise-tagged next summer if no long-term agreement could be reached, similar to All-Pro guard Brandon Scherff’s contract situation.

Scherff is playing a second consecutive season on the franchise tag with a split or an extension coming next year. Allen likely will be part of Washington's defense for the foreseeable future.

Washington drafted Allen 17th in 2017 after he slipped because of shoulder injury concerns. After a rookie year derailed by a foot injury, he has been the picture of health and grown into the cornerstone of the defense and a team leader.

The 26-year-old Alabama product was a key reason Washington had the NFL's second-ranked defense in 2020. He was fourth on the team with 63 tackles, had two sacks and played an important role in mentoring AP Defensive Rookie of the Year Chase Young.

Allen has also been consistent throughout Washington's many front office and coaching changes. He has 190 tackles and 17 sacks in 52 pro games and anchors a defensive line that also includes 2018 first-round pick Daron Payne and Tim Settle.