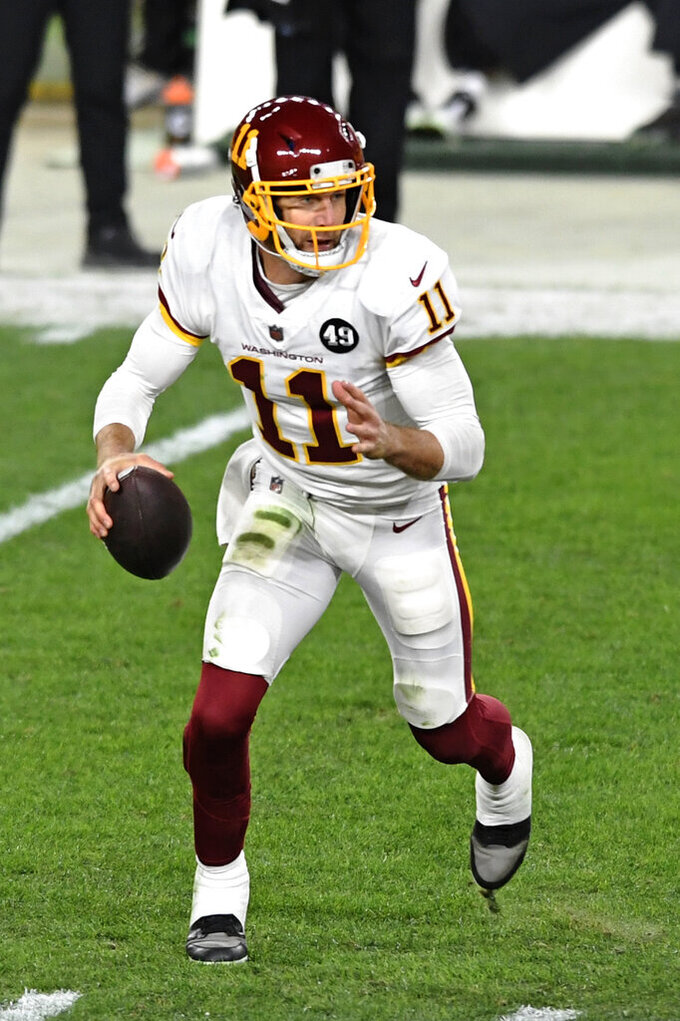 Washington Football Team quarterback Alex Smith (11) looks to pass during the first half of an NFL football game against the Pittsburgh Steelers in Pittsburgh, Monday, Dec. 7, 2020. (AP Photo/Barry Reeger)

WASHINGTON (AP) — Alex Smith, in his words, could “see the blood pumping out” of a cut under his left sock late in the first half of Washington’s last game. So could the TV audience.

“Never,” the 36-year-old quarterback would say after the win, matter-of-fact as can be, “had one gush like that.”

He simply shrugged off what he attributed to getting accidentally stepped on and helped complete a come-from-behind 23-17 victory over the previously unbeaten Pittsburgh Steelers.

After all, what sort of hassle was that compared to the 17 operations Smith went through after breaking his right leg, a medical nightmare that sidelined him for nearly two full years, threatened his ability to walk and even put his life in danger?

Smith truly is Mr. Comeback. And he seems to be a clear-as-could-be choice to collect Comeback Player of the Year honors, merely by virtue of returning to the field.

Doesn’t even matter that his steady leadership and take-what-they-give-you passing has led Washington (5-7) to three consecutive wins and helped turn around the club’s season heading into Sunday’s game against the San Francisco 49ers (5-7).

“It has been a progression from the first play, getting out there and getting over the whole contact hump and hurdle to take hits, and kind of moving beyond that, because that was a step for me. Then, moving on and going to the next step and going out and playing well,” Smith said Thursday. “Doing that, all of a sudden, the progression became starting now — and, with a week of preparation, going out there and play winning football.”

There was some trepidation at the outset of this remarkable process, naturally.

For Smith, sure, but also for teammates and coach Ron Rivera.

“It’s only natural for you to be a little anxious and nervous. He went through an injury where 99% of people are going to call it quits afterwards,” defensive lineman Jonathan Allen said. “So for him to come back, and not only, first of all, play football again, which is impressive, but compete, which is impressive, and then start, and then lead our team — the last three, four weeks ... he’s been phenomenal — it’s a testament to his will and his drive.”

Like plenty of others, Niners coach Kyle Shanahan did not expect to see Smith in NFL action again after the hard-to-look-at broken tibia and fibula during a game in November 2018, which was followed by complications related to an infection.

“Anyone who’s had the career that he’s had, and then had that serious of an injury, you would think that they’re good not playing again,” Shanahan said. “The guy loves football. He’s determined to do some pretty special things. That’s why he’s done it his entire life. ... He knows where to go with the football. Put in Alex with that team, and the way their defense is playing, (he) gives them a chance to win every game.”

Still, Rivera acknowledged he was apprehensive at the start of this season about the idea of putting Smith in harm’s way.

So the coach kept a close eye on Smith in practice, looking for increased confidence.

And then Smith wanted to chat with Rivera. That, the coach said, was key.

“His desire and his want to be out there — he wanted more. He felt he needed more to see. Just hearing that from him, I put him into a position where things were about as close to live as it could be. Guys were all around him, clawing in front of him and knocking and bumping into him, and he just kept going. He kept going and kept going,” Rivera said. “I kind of got more and more confident in him ... because his confidence was growing. I think that’s what really helped me in terms of being willing to put him out there.”

Smith did need to wait his turn, with Dwayne Haskins and Kyle Allen playing QB before he did.

Since taking over as the starter in Week 10 after Allen got injured, Smith — who was drafted No. 1 overall by San Francisco in 2005 — has completed 69% of his passes for 1,001 yards, three TDs and two interceptions, an 88.2 rating.

“I am feeling really good and comfortable right now — on the field and off the field, as well,” Smith said. “I do feel like, compared to five or six weeks ago, I do feel better. I still feel like I’m progressing, but not limited in any way.”

NOTES: RB Antonio Gibson (turf toe) didn't practice, which Rivera called “concerning.” ... Allen said it was “just the coolest thing ever” to be Washington's nominee for the Walter Payton NFL Man of the Year Award, in part for his work with Sasha Bruce Youthwork, a nonprofit group in the nation's capital that helps homeless children.