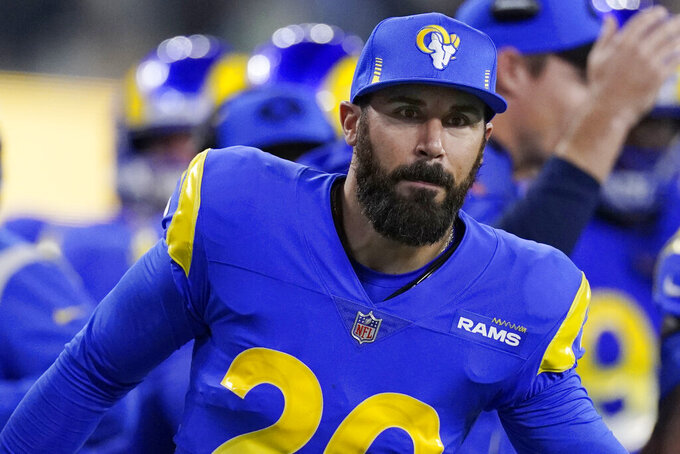 FILE - Los Angeles Rams defensive back Eric Weddle (20) congratulates teammates during the second half of an NFL wild-card playoff football game against the Arizona Cardinals in Inglewood, Calif., Monday, Jan. 17, 2022. Weddle played 12 NFL seasons, then retired after the 2019 season. Thanks to a call from the Los Angeles Rams, the two-time All Pro safety finally will play in the game that eluded him in stints with the Chargers and Baltimore. (AP Photo/Mark J. Terrill, File)

As the coach of his son's 12-and-under Pop Warner team in the San Diego area, Eric Weddle had a message for the young players to not take the opportunity to win a championship for granted.

“I just reminded them that I played 20 something years straight of tackle football, organized football at every level and never won a championship," he said Monday. “If we did it, which we did, you will always have that memory, no matter how long you play, that this group of guys won a championship. It’s very special when you think about it because it doesn’t happen often."

That youth team won. Weddle, remarkably, is now aiming for a second title, one with much larger stakes than a Pop Warner league. He came back last month for a playoff run with the Los Angeles Rams following a two-year retirement and can end his career with the Super Bowl title that eluded him during his first 13-year stint in the NFL.

The 37-year-old Weddle's journey from driving car pools, coaching youth football and watching games on his couch to playing safety for the Rams in the Super Bowl on Sunday against the Cincinnati Bengals is a surreal one that Weddle calls the “craziest story ever.”

“It’s pretty special,” he said. “This whole thing has been a whirlwind over the last few weeks and to be able to be in this moment on the cusp of something that has been missing in my life is pretty fortunate. Definitely humbled by this opportunity and will do everything I can to help this team win it.”

Weddle has done that so far through three playoff games after getting the call from defensive coordinator Raheem Morris after the regular season following injuries to Jordan Fuller and Taylor Rapp left the Rams short-handed at safety.

Morris started the conversation by asking whether Weddle was “fat and out of shape” and after being assured that wasn't the case, the Rams brought him back for a second stint. Weddle played his final NFL season for Los Angeles in 2019 before retiring.

Weddle joined the team days before their playoff opener against the Cardinals. Weddle played just 19 snaps that first game before ramping it up with 61 defensive snaps the following week against Tampa Bay. Then came all 51 in the NFC title game against San Francisco when he had a team-high nine tackles, including a key one for a loss that helped turn the game in the fourth quarter.

“It’s been a slow progression. A lot, a lot, a lot of work,” Weddle said. “I don’t think people understand. I’ve never worked so hard in my life over the last four weeks to get my mind, body ready for this because I’ve been behind an eight-ball for two years. The plan put forth with Raheem and (coach) Sean (McVay) and the training staff has worked out perfectly, now able to be the best version of myself for the Super Bowl. That was the best case scenario if we made it this far.”

Rams cornerback Jalen Ramsey was excited when Weddle told him he would return, and knew that his leadership, communications skills, and knowledge of defenses would pay dividends.

But even Ramsey acknowledged he was surprised by how well Weddle has been able to play after missing two seasons.

“A little bit. I’m not going to lie,” Ramsey said. “Not mentally or anything like that, but physically. To be in shape and play well. It takes a toll on your body. It’s been two years. To come back into a playoff atmosphere and play this as well, yeah, this is surprising.”

The return to the field is a temporary one for Weddle, who has no desire to make another comeback despite the success of this one. When Sunday ends, whether win or lose, he will return to his old life completely fulfilled from an impressive career.

“Just back to being at home and doing the family, kid duty and getting ready to coach my son’s tackle football team,” he said. “I was my son’s head coach this past year and loved it, and I plan on doing that again. It brought a lot of joy and fulfilment coaching him and all his buddies, and seeing the kids grow and pushing them to greatness. That’s what I look forward to doing. Definitely not coming back after this. All the stars had to align for this to happen, and I don’t see that happening ever again.”