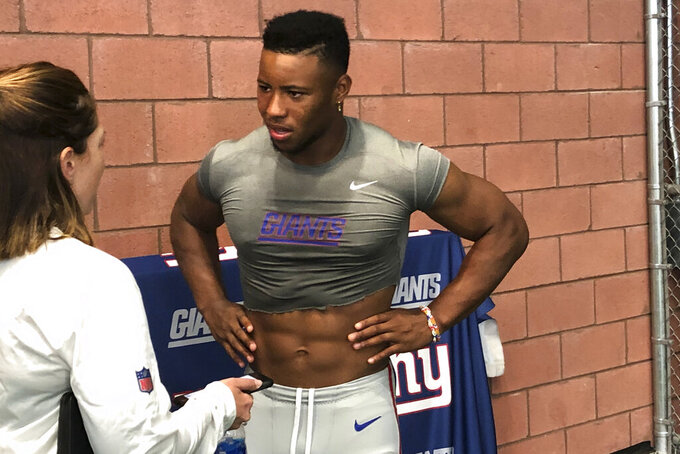 While in uniform, the NFL offensive rookie of the year last season was a spectator and cheerleader for the Giants' 31-22 victory over the Jets on Thursday.

Speaking to the media Monday after practice, Barkley shrugged off his role as a non-participant. He is getting a lot of work every day in practice. He's been a halfback long enough to know how to run the ball. And he certainly doesn't need to get hit to get ready for the season opener at Dallas on Sept. 8.

If last season is any indication, the second pick overall is going to be hit around 400 times this season. He carried the ball 261 times for 1,307 yards and was targeted for passes 121 times, catching 91. That's 382 times he was a target and doesn't take into account either the times he has to block or when he is hit while carrying out a fake.

Still, Barkley would not object to playing in the preseason.

"If you know anything about me, or if you ask my teammates, I love the game of football," the Penn State product said. "Any opportunity that you get to play. Every single day we stop, and we mention, especially in the RB group, how big of a blessing it is to come out here and play the sport that you love."

Barkley spoke to Shurmur after being told he was not going to play in the opener and was told there is a plan. Neither he nor Shurmur discussed it.

Barkley missed most of preseason last year after straining a hamstring in the opener.

"Do I think I need it? I think it depends on the player," Barkley said. "Every year is different. Am I ready if I have to? Yes, my mindset every week is to prepare to get ready to go out there and compete at a high level for my team, no matter if it's one snap, two series, one quarter or if I don't play. If I don't play, I stay locked in and try to be the leader that I can to keep the energy and the vibes good on the sideline."

Barkley showed his energy level on Thursday running down the sideline to congratulate rookie quarterback Daniel Jones and receiver Bennie Fowler after a touchdown pass.

Barkley laughed at the idea he needs to get hit to be ready for the season.

The Giants have had Barkley lined up as somewhat of a wide receiver on some plays recently. The hope is to match him against a linebacker or safety in open space.

It would be an interesting wrinkle this season, with Odell Beckham Jr. now playing in Cleveland.

However, Barkley is a running back first.

Second-year left guard Will Hernandez said the line is going to do its job whether Barkley is carrying the ball or it's Wayne Gallman, Paul Perkins or any other back.

"We always come out and we give it our all, it doesn't matter what back we've got back there," Hernandez said. "Obviously, Saquon makes things a little bit easier sometimes."

NOTES: CB DeAndre Baker is being listed as day-to-day with a sprained left knee. He was hurt in a non-contract drill Sunday. ... CB Sam Beal is making progress coming back from a hamstring injury. He is day-to-day. ... Rookie WR Darius Slayton practiced fully for the first time since sustaining a hamstring injury three weeks ago. ... WR Amba Etta-Tawo tore an Achilles tendon in practice Monday. ... Shurmur fell over his bulldog walking out the house and has a scrape on the left side of his face.