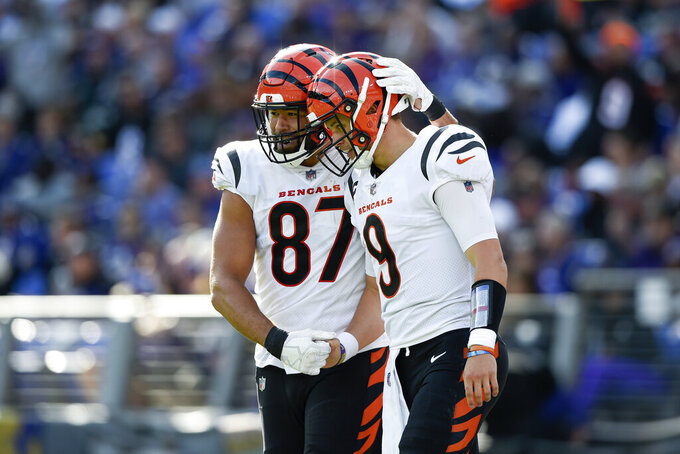 Cincinnati Bengals tight end C.J. Uzomah (87) and quarterback Joe Burrow (9) react after they connected for a touchdown pass during the second half of an NFL football game, Sunday, Oct. 24, 2021, in Baltimore. (AP Photo/Gail Burton)

CINCINNATI (AP) — Cincinnati safety Jessie Bates III had a message for reporters waiting outside the locker room after the Bengals' biggest win in years.

"If you’re not believing now, you’d better start,” Bates said after the Bengals (5-2) rolled over the Baltimore Ravens 41-17 on Sunday for their best start since 2015.

The term “statement game” may be overused, but it's hard to argue that the complete win over an AFC North team that has bullied them for years showed that these aren't the same old Bengals.

Quarterback Joe Burrow threw for a career-best 416 yards and three touchdowns, rookie Ja'Marr had a season-high 201 receiving yards and a touchdown, and the Cincinnati defense owned Ravens quarterback Lamar Jackson. Tight end C.J. Uzomah, injured for most of 2020, had two touchdown catches.

“This is their moment,” coach Zac Taylor said after Cincinnati snapped a five-game losing streak against the Ravens. “Everything we’ve talked about, we’ve earned. We’re starting to earn respect, but we still have a long way to go. Just winning one road game against a divisional opponent, that’s what you have to do if you want to compete in this league. We have a long way to go, but I’m really proud of the collective team effort.”

Burrow got good protection from his offensive line and was sacked just once. The second-year quarterback keeps affirming the team's decision to make him the top overall draft pick in 2020. He has at least two touchdown passes in all seven games this season and 17 in total puts him among the league leaders.

“Obviously, last year wasn’t very fun," said Burrow, who suffered a season-ending knee injury in Week 11 as the team limped to a 4-11-1 finish in 2020. "(Sunday) was a lot of fun. Now it just really comes from preparation during the week and getting a lot of extra reps with the guys, and our guys on the outside making plays. There wasn’t a ton for me to do today apart from trying to protect the ball. It was putting balls in positions where our guys could go make plays.”

Cincinnati's offense put up a season-high 520 total yards, with an average gain of 8.3. Burrow and Chase keep building on a chemistry that started when the two were teammates on LSU's 2019 national championship squad. Chase is the second player in NFL history with at least 50 yards receiving in his first seven career games. Running back Joe Mixon broke away for a 21-yard touchdown run, and Samaje Perine had a 46-yard rush for a score. The Bengals had just one turnover, a Burrow interception.

Cincinnati continues to start slowly and not get the offense clicking until the second half. A pair of field goals and a touchdown put the Bengals up 13-10 at halftime as they converted on just 1 of 7 third downs before the break. The Ravens took a 17-13 lead early in the third quarter before the Bengals exploded. In the previous week's 34-11 rout of Detroit, Cincinnati's halftime lead was 10-0. The Bengals trailed Jacksonville 14-0 at the half before winning 24-21 in overtime in Week 4.

The defense, which got a major makeover in the offseason, has been a force, particularly the line. D-linemen were in Jackson's face all day, sacking him five times and logging seven hits. The pass rush was a glaring weakness last season.

“Like I have said for weeks now, this is special," said defensive end Trey Hendrickson, who had a sack that pushed Baltimore out of field-goal range in the third quarter. He's got 6 1/2 so far in his first season in Cincinnati after signing as a free agent.

“This is a stepping stone to take us where we want to go," he added.

Veteran WR Tyler Boyd has taken a back seat since Tee Higgins and then Chase came to town. On Sunday he was targeted seven times and had just four catches for 39 yards.

114-19 — combined score of the three previous Ravens wins over the Bengals, before last Sunday.

Cincinnati has a good chance to win its third straight, facing the struggling New York Jets (1-6) next Sunday. After that, the Bengals come home for a key divisional matchup with the Browns (4-3) ahead of an off week.