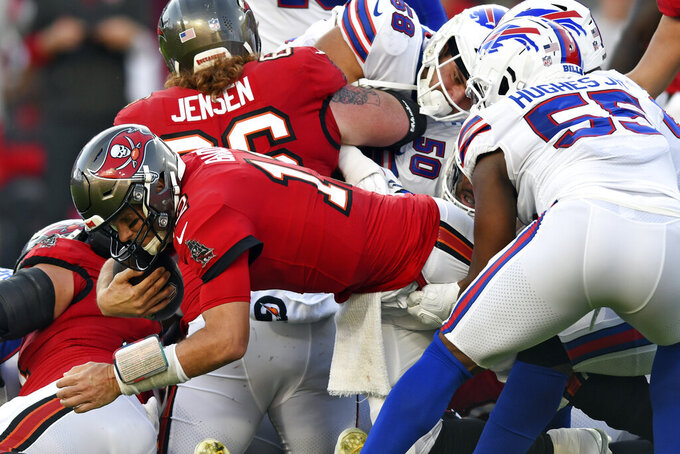 Tampa Bay Buccaneers quarterback Tom Brady (12) dives for a first down against the Buffalo Bills during the first half of an NFL football game Sunday, Dec. 12, 2021, in Tampa, Fla. (AP Photo/Jason Behnken)

TURNOVER DIFFERENTIAL: Saints plus-1; Buccaneers plus-9

BUCCANEERS PLAYER TO WATCH: Tom Brady leads the NFL with 378 pass completions, 554 attempts, 4,134 yards and 36 touchdowns. The seven-time Super Bowl champion has never topped the league in all four categories in the same season. He’s 0-3 in the regular season against the Saints vs. 21-5 against the rest of the NFL since signing with the Bucs in 2020.

KEY MATCHUP: The Saints' running game led by the versatile Kamara and dual-threat QB Taysom Hill against Tampa Bay’s formidable run front. The Saints had 203 yards rushing in last week’s road win over New York Jets. The Bucs’ defense ranks third in the NFL against the run, allowing 91.2 yards per game on the ground.

SERIES NOTES: New Orleans has won the past six regular season meetings. However, the Bucs beat the Saints in last season’s divisional round of the playoffs en route to a Super Bowl triumph. ... The Saints won by 35 points when these teams met in Tampa last season. ... Payton has a 19-10 regular-season record against Tampa Bay. A victory on Sunday night would give Payton 20 victories over two teams. Atlanta is the other. ... The Saints have swept the season series with Tampa Bay seven times since creation of the NFC South in 2002.

STATS AND STUFF: Saints QB Taysom Hill completed 71.4 percent of his passes and rushed for 73 yards and two TDs in last week’s win over the Jets. He has rushed for six TDs in six starts at QB. ... Jordan has 8½ sacks in his past nine games against the Bucs. He had one and a forced fumble in the most recent meeting. ... Brady is 7-0 with 2,346 yards passing and 27 touchdowns (26 passing, one rushing) and four interceptions in Tampa Bay’s last seven regular-season home games. ... The Bucs are 6-0 at Raymond James Stadium vs. 4-3 on the road this year. ... Bucs WR Mike Evans is tied for second in the NFL with 11 touchdowns receiving. With 885 yards receiving, he’s 115 shy of becoming the first player in league history to begin a career with eight consecutive 1,000-yard seasons. ... Rob Gronkowski is 18 yards shy of becoming the fifth tight end with 9,000 career yards receiving.

FANTASY TIP: Bucs WR Chris Godwin, who has a career-best 92 receptions, is aiming for his third straight game with 10-plus catches and 100-plus yards. He had eight receptions for 140 yards and one TD against the Saints on Oct. 31.