Carr sees promise ahead as Raiders miss playoffs yet again 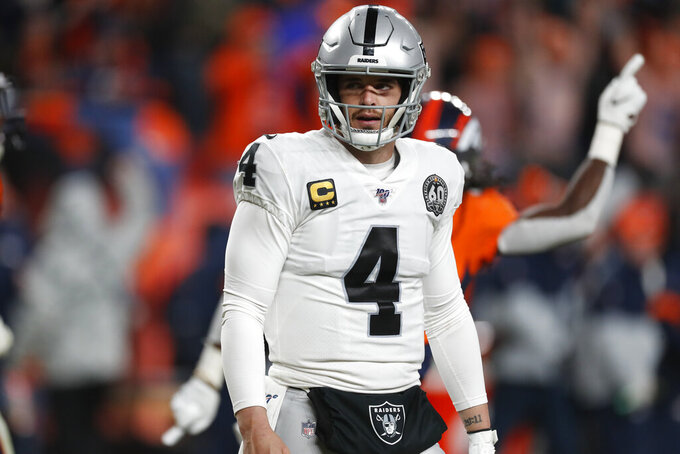 Oakland Raiders quarterback Derek Carr reacts after missing a two-point attempt during the second half of an NFL football game against the Denver Broncos, Sunday, Dec. 29, 2019, in Denver. (AP Photo/David Zalubowski)

DENVER (AP) — Here's a safe bet Derek Carr's willing to make: The Oakland Raiders are about to turn around their fortunes.

It has nothing to do with their upcoming move to lucky Las Vegas, either.

The Raiders quarterback appreciated the growth of his squad in what has been a snake-bit sort of season. Through it all, Oakland had a glimmer of a chance at a postseason spot until the final few minutes or so of its year. Things didn't break its way in games around the league — or in its own game, for that matter.

Carr's pass on a 2-point conversion was batted down with 7 seconds remaining as the Raiders lost 16-15 to the Denver Broncos on Sunday. Still, Carr thinks his team is on the verge of striking gold.

At 28 and with the Raiders getting set to relocate to Vegas, Carr sees the Raiders (7-9) entering a window where they can be contenders in their new home in the desert.

Those are long odds, given their track record.

“We are close,” said Carr, who threw for 391 yards and a late score. “This is the first time, if I'm being honest, in my career, where I can sit there and look at the future and be like, ‘We can really be good for eight to 10 years.' ... We did some things that, let's just be real, no one thought we were going to do."

Their postseason aspirations were ended before the time ran out in the Broncos game. With Tennessee beating Houston, the Raiders were officially eliminated.

And, yep, Carr knew that. He was looking around the stadium for the time remaining when he saw the Titans score.

So he put it away and went to work.

Carr and the Raiders offense were given good field position after Brandon McManus missed a 57-yard field-goal attempt that would've sealed the win for the Broncos (7-9). Oakland had the ball at its 45-yard line with 1:41 remaining.

Carr hit Hunter Renfrow for the touchdown on second-and-goal from the 3 — the first time the Raiders reached the end zone in five red-zone trips -- and Jon Gruden went for 2 instead of the tie.

The call seemed perfect — Renfrow was open. The throw seemed precise — Carr threw it where he wanted to. Just then, defensive lineman Shelby Harris reached out his right hand and knocked it away.

“You get this feeling inside when it opens up and you're like, ‘We have it. This is the win,'” Carr recounted. “For the ball to get batted down, it breaks your heart. ... I'm sure someone will blame me for that. But you've got to give Shelby credit for making that play.”

Things have changed for Carr & Co. with Gruden around for a second season. It's a different landscape. That's why he's eager for the future.

“There's no doubt that since coach Gruden got here, we've changed the culture of this thing, how he wants it to be,” Carr said. “Trust me, in our building we know the way we're headed.”

Gruden feels that way, too, even through all the twists and turns of the season. They dealt with the Antonio Brown saga leading up to the season opener, beat Denver in Week 1, saw the emergence of rookie running back Josh Jacobs (he missed Sunday's game with a shoulder injury/illness), won three straight, hit a late four-game skid and were still in the playoff chase.

“Very proud of the effort all season long, the development of our team,” Gruden said. “I think we're getting better."

He wasn't in the mood to rehash the season, though.

With good reason: The Raiders missed a short field goal on their opening drive. Then, in the second quarter, they had a touchdown catch by Renfrow reversed on replay. On the next play — fourth-and-goal at the 1 — fullback Alec Ingold was stopped to thwart the drive.

“We left a lot out there," Gruden said. "There were plays to be made and we didn't make them.”

Now, it's about getting packed up for their move to their new home in Vegas. A fancy stadium awaits.

“At the end of the day, it doesn't matter how nice of a stadium" it is, Renfrow said. “We have to go win football games on the field."