On Football: With Brady on verge of playoffs, Patriots done 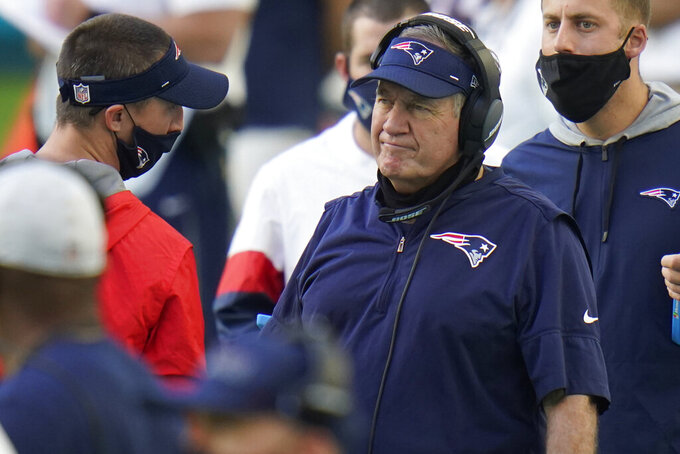 New England Patriots head coach Bill Belichick stands on the sidelines during the second half of an NFL football game against the Miami Dolphins, Sunday, Dec. 20, 2020, in Miami Gardens, Fla. The Dolphins defeated the Patriots 22-12.(AP Photo/Chris O'Meara)

Three AFC East teams won in Week 15 — yes, even the Jets. The one defeat, by the Patriots, was historic.

New England has the NFL's longest string of making the postseason, 11 seasons, all with a guy named Tom Brady at quarterback. Dallas holds the NFL mark with 20 straight seasons with a winning record. Minus Brady, the Patriots fall one year short of that.

Dour as always, Belichick offered little insight into how a perennial championship contender has slipped to a 6-8 record. He wasn't about to mention that a major reason — and probably the main reason for all that success through two decades — is now wearing a Buccaneers uniform. And almost certainly headed to the playoffs Belichick and company will miss.

“To win these games, we've got to do a better job,” he said after a 22-12 loss in Miami that spotlighted the problems the 2020 Patriots have had: little talent on offense; sketchy defense, particularly in clutch situations; a lack of precision; and, yes, little cohesion between the guys wearing headsets and those with helmets on.

“I got to do a better job and, collectively as a staff and a team, we've got to perform better than this.”

In essence, the Patriots lost more than their winning ways when they lost their quarterback. They lost leadership, direction, big plays, and their mojo. Like Michael Jordan and Wayne Gretzky, Brady made everyone around him — including the coaches — far better performers. He did it not only during games, but during the week in preparation. He did it through motivation. He did it with his arm, his head and his heart.

No one is saying the Patriots have lacked heart this season; their close victories against Baltimore, Arizona and even the Jets prove their grit. Such veterans as Devin McCourty, Stephon Gilmore and Matthew Slater would never allow ennui to invade their locker room.

But they also lost to Denver, San Francisco and Houston, all of which will be spending the postseason as home, too. Without Brady, the onus was too heavy on a defense that often was undermanned. Without Brady — not to mention Julian Edelman and Rob Gronkowski — there was no one to lift the offense. And without Brady, only very rarely was there any significant boost from the coaching staff.

“It’s felt like we’ve chased it the whole year, whether it’s offense, defense, one play, a missed opportunity on defense, a turnover on offense, it just seems like no matter what, it’s just right out of our reach,” McCourty said. “That’s how you end up in the position we’re in.”

So what is that position as the Patriots move forward?

Within the division Brady ruled, there is a new king, the Bills. There's a team on the rise in Miami. Both are young and dynamic, superbly coached — Buffalo's Sean McDermott and Miami's Brian Flores are in the conversation for Coach of the Year — and with something New England doesn't have and allowed to walk away: likely franchise quarterbacks.

There's also defending Super Bowl champion Kansas City in the West; a rising contender out of Cleveland in the North to go along with resourceful and resilient Pittsburgh and Baltimore; and two teams with solid bases in the South, Tennessee and Indianapolis.

Other than the Chiefs and Andy Reid, all have relatively young head coaches who figure to be around and successful for a while. Belichick is 68 and faced with a significant rebuilding project.

And one of the building blocks he must find is a quarterback. Cam Newton hasn't been the answer; not even close. Some observers believe the Patriots will seek a veteran QB to try to rekindle the offense, perhaps a Matthew Stafford or a Matt Ryan should they become available. Others suggest Belichick will attempt to bring back one of his former quarterbacks — no, not that one in Tampa — in Jimmy Garoppolo or Jacoby Brissett.

New England hasn't needed to develop a young starter at the most important offensive position since Brady was in his early 20s. That probably is the right way to go given the dearth of talent on that side of the ball, but does Belichick have the patience and the longevity to go that route?

Regardless, in a year played during a pandemic that strongly impacted the Patriots, Belichick and his staff can spend January not game planning but re-evaluating. They might even have time to tune in to watch Brady and the Buccaneers in the playoffs.