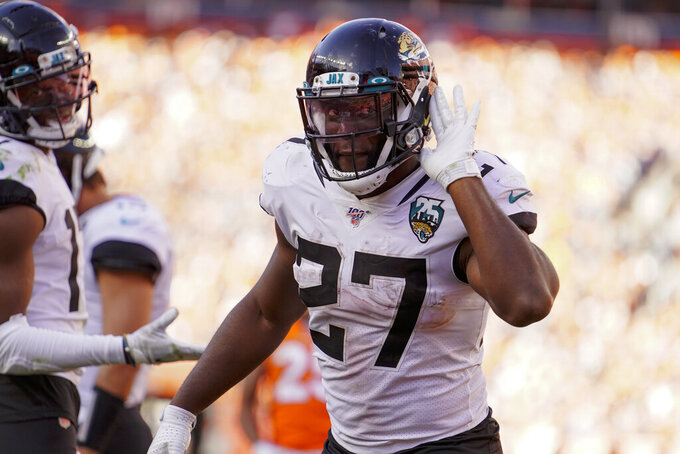 Jacksonville Jaguars running back Leonard Fournette reacts towards the crowd after a gain during the second half of an NFL football game against the Denver Broncos, Sunday, Sept. 29, 2019, in Denver. (AP Photo/Jack Dempsey)

DENVER (AP) — Neither Leonard Fournette's lingering frustration or Jacksonville's long drought without a 100-yard rusher showed any sign of abating Sunday when the Jaguars fell behind Denver by two touchdowns and Von Miller was celebrating his 100th career sack.

Fournette never lost faith and finished with a career-best 225 yards on 29 carries, sparking the Jaguars to a 26-24 win on Josh Lambo's 33-yard field goal as time expired.

"Making one guy miss and not letting one guy tackle you, that was my whole mentality coming into this game," said Fournette, who darted past Bradley Chubb at the line and bowled over Justin Simmons on his 81-yard rumble in the third quarter.

That set up Jacksonville's go-ahead touchdown and gave both him and the Jaguars (2-2) their first 100-yard game since Dec. 10, 2017, against Seattle.

"It was huge," Minshew said. "We were kind of backed up at that point, we got a good run, the O-line blocked it up and he did what he does. Once he gets in the secondary 1-on-1, he's hard to deal with. I was really happy for him to really get rolling. I know he's been getting frustrated and it was an awesome day for him."

The Broncos (0-4) not only were victimized by a last-second field goal for the second time this season, but they blew a 14-point lead at home in a loss for the first time since 2006.

"We've got to find a way to close the game out," Miller said.

Minshew rove the Jaguars, one of four AFC South teams who are 2-2, into field goal range after Joe Flacco's 8-yard TD throw to Courtland Sutton with 1:38 left gave Denver a 24-23 lead.

Eerily reminiscent of their 16-14 loss to the Bears in Denver two weeks ago, the Broncos helped ignite the winning drive by getting whistled for roughing the passer.

Against Chicago, it was Chubb's questionable penalty, which the league admitted was a bad call. Against the Jaguars, it was a flag by Miller, who reached up and struck Minshew in his neck just as he released his pass after picking up the ball Chubb had knocked from his hand in a chaotic pocket.

"The refs got a hard job," Miller said. "We've got a hard job. It's just tough. It was a tough day, but we can't really blame the refs."

On the next play, Minshew hit Chris Conley with a 32-yard strike to get Lambo in range for his fourth field goal.

Miller's foul spoiled his big day in which he collected his 99th and 100th career sacks and drew several holding penalties, one of which wiped away a Jaguars touchdown.

The Jaguars also recorded their first takeaway of the season despite missing star cornerback Jalen Ramsey, who was deactivated and missed a game for the first time in his four-year NFL career. He missed practice all week, first with an illness, then a back injury and finally for paternity leave.

Denver led by two TDs and was driving for another score just before halftime when safety Ronnie Harrison intercepted Flacco, who airmailed a pass to Emmanuel Sanders. That led to Lambo's second field goal, pulling the Jaguars to 17-6 at the break.

"We weren't going to freak out," Minshew said. "We were down 11 and we got some points just before half; that was huge. We knew we were going to get the ball back and have a chance to get right back in the game. We never doubted."

Coming out of the break, the Jaguars employed a heavy front with 308-pounder Cedric Ogbuehi serving as an eligible receiver and extra blocker for Fournette.

The Jaguars went on a 75-yard, 16-play opening drive that ate up nearly 10½ minutes, which Minshew capped with a 7-yard TD toss to running back Ryquell Armstead after slipping two potential sacks and with Derek Wolfe and Miller bearing down on him.

This was the Broncos' third gut-wrenching loss in coach Vic Fangio's first month.

"Adversity can bring you together or break you," defensive end Derek Wolfe said. "'So, we have to use this to bring us together, use it as a positive. Otherwise, we are in for another (bad) season."