Mayfield, Hunt injured as Browns battered in loss to Cards 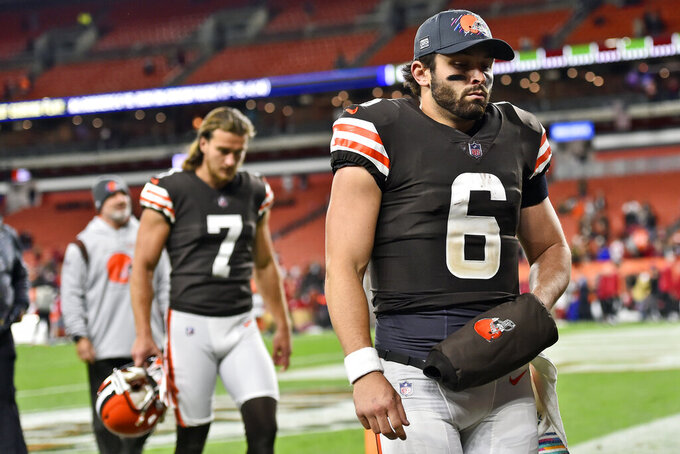 CLEVELAND (AP) — Baker Mayfield slowly walked out of FirstEnergy Stadium with his left arm immobilized by a sling.

Cleveland's season might as well be fitted with one.

The Browns took a beating in a 37-14 loss on Sunday to the Arizona Cardinals as Mayfield reinjured his non-throwing shoulder and running back Kareem Hunt suffered a potentially serious calf injury.

Mayfield uttered an obscenity when asked how his shoulder felt, but the Browns starting quarterback was adamant that he wouldn't miss any time and will play Thursday night against Denver.

The injuries to two of Cleveland's best offensive players comes on the heels of star running back Nick Chubb missing the game with a calf injury and the Browns playing without starting tackles Jack Conklin (knee) and Jedrick Wills Jr. (ankle).

The Browns (3-3) aren't healthy and their record isn't flourishing either. A season with so much promise is suddenly unstable.

“We are a 3-3 football team, and we played like it,” said coach Kevin Stefanski, who refused to use injuries as an excuse. "We were just very, very average, and that is my responsibility to get it fixed.

"That is what we have to do because we have to turn right around and come back in here Thursday night and find a way. Really disappointed. Again, we just have to find a way to clean this stuff up.”

Mayfield, who has made 50 consecutive regular-season starts, initially hurt his shoulder while trying to make a tackle on Sept. 19 against Houston. He's been playing with a torn labrum and wearing a protective harness which helps keep his shoulder from popping out of the socket.

Mayfield said Sunday's injury was probably worse than the first one, and that he's scheduled to undergo an MRI "and stuff tomorrow so we will find out more.”

“It dislocated again and slipped out again on a non-contact play,” he said. "Just have to figure out a way to get better.”

It's not clear exactly when Mayfield got hurt against the Cardinals (6-0) but he was forced to leave the field after star defensive end J.J. Watt chased him out of the pocket and tripped him up while scrambling.

Mayfield fumbled on the play — his third turnover — and he stayed on the ground for several minutes while being treated as Watt and several others dropped to a knee in support. Mayfield made two trips to the medical tent but stayed in the game until being replaced in the final minutes when it was out of reach.

Mayfield finished 19 of 28 for 234 yards with two touchdowns. He was sacked five times.

“I was just over there around him trying to make sure he was OK,” said wide receiver Donovan Peoples-Jones, who caught a 57-yard touchdown pass from Mayfield on the final play of the first half. ”We need him. He’s a big part of this team, and he keeps us going.

"He wants to be out here for the team, so he’s definitely a tough guy and a great competitor.”

Hunt's injury could be devastating. He and Chubb give Cleveland one of the league's most potent and productive running games, and the Browns aren't the same without one of them — never mind both.

Hunt wasn't targeted on a pass play in the fourth quarter, and after struggling to get to his feet, the 26-year-old collapsed to the turf. He was unable to put any weight on his leg while being helped to the sideline before leaving the field on a cart.

“It sucks,” Mayfield said when asked about his teammate. “He was playing through some nicks and injuries as well. For it to happen on kind of a simple pass play that he's just going over the ball, it just sucks.

"I hurt for him. I just talked to him, and it is the first time that he had not finished a football game.”

With a short week, the Browns don't have time to feel sorry for themselves.

“We are going to see what we are made of,” Mayfield said. "Our backs are up against the wall right now, and I like our chances.”