Miller gets 1st sacks but whistle ruins his, Broncos' day 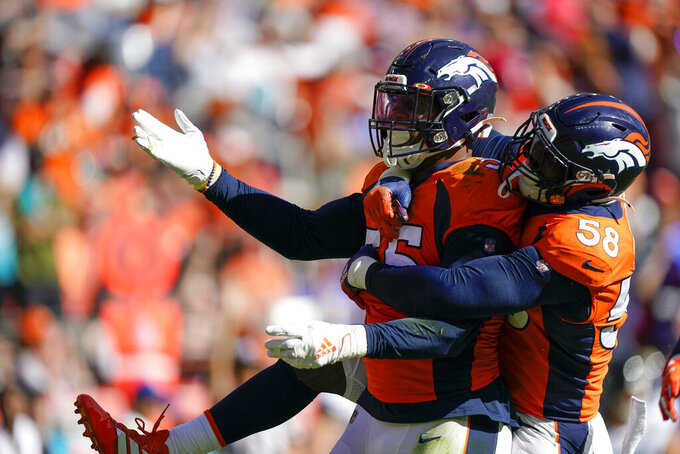 Denver Broncos outside linebacker Bradley Chubb, left, celebrates his sack with teammate outside linebacker Von Miller during the first half of an NFL football game against the Jacksonville Jaguars, Sunday, Sept. 29, 2019, in Denver. (AP Photo/Jack Dempsey)

Nor could he enjoy any of the holding calls he kept drawing like the one on Cam Robinson that wiped out a Jaguars touchdown.

On a night Miller ended Denver's sackless start and became the fourth-fastest player to reach the century mark in quarterback conquests, the star linebacker's most significant play came when he was whistled for roughing the passer with 1:18 remaining and the Broncos trying to close out their first win for Vic Fangio.

It was eerily similar to Bradley Chubb's roughing call in the final minute two weeks ago against Chicago that led to the Bears' game-winning field goal as time expired.

After harassing rookie Gardner Minshew II into an incompletion on first down, it looked like Chubb was going to record Denver's sixth sack when he knocked the ball from Minshew's grasp.

Minshew grabbed the ball on the bounce and quickly fired it to DJ Chark Jr. for a 1-yard gain.

Just as he released the quick pass, Minshew fell backward with Derek Wolfe at his feet and Miller reaching up and striking him either in the neck (which the officials ruled) or in the sternum (which would be legal).

Miller didn't know if the officials got this one wrong, too.

"I don't know, I haven't seen it," said Miller, quickly adding, "The refs have got a hard job."

Fair or not, the 15-yard flag gave the Jaguars a first down at their 41.

On the next play, Minshew found Dede Westbrook for a 32-yard gain that put Josh Lambo in range for his fourth field goal, a 33-yarder as time expired .

Miller, who held a 12-second news conference Thursday in which he took no questions, said the offense did its job in getting the late lead and "defense, we've got to find a way to close the game out."

"That's the second time this season that that's happened to us," Miller said. "(But) there's really no time for us to feel sorry for ourselves.

"I'm going to take a long, hard look in the mirror, which I always do, and do it again. That's the answer to all our problems. I was able to get on the board with sacks, but everybody knows the win column is the most important stat for us. It was a tough one. It's a tough patch for us."

A loss to the Chargers next week would leave the Broncos with their worst start in the franchise's six-decade history.

After becoming the first team in league annals to go the first three games of a season without a sack or a takeaway, the Broncos sacked Minshew five times.

Suddenly, though, they couldn't stop the run.

Leonard Fournette ran over them for a career-high 225 yards , 190 of which came in the second half highlighted by his 81-yard run.

"Fournette is a good back. We just got beat," Miller said. "We couldn't stop the run, we couldn't tackle the quarterback."

He was stumped to explain why the Broncos can't close out games.

"If you play the same game four times, you've got to get lucky and win one of them," he said. "We just haven't been able to get in the win column yet. But there's really no time to feel sorry for ourselves. We've got 12 games left, it's still early in the season. We've got a lot of ball to play."

He won't address his team as some players do in moments like this.

The Broncos have three gut-wrenching losses under Fangio and now will try to join the 1992 Chargers as the only teams in NFL history to reach the postseason after losing their first four games.

While Miller said he can't figure out Denver's lack of luck given the talent on the team and the coaching staff, which he said includes "some of the best coaches I've had my entire career," he knows one thing: more hard work is coming.