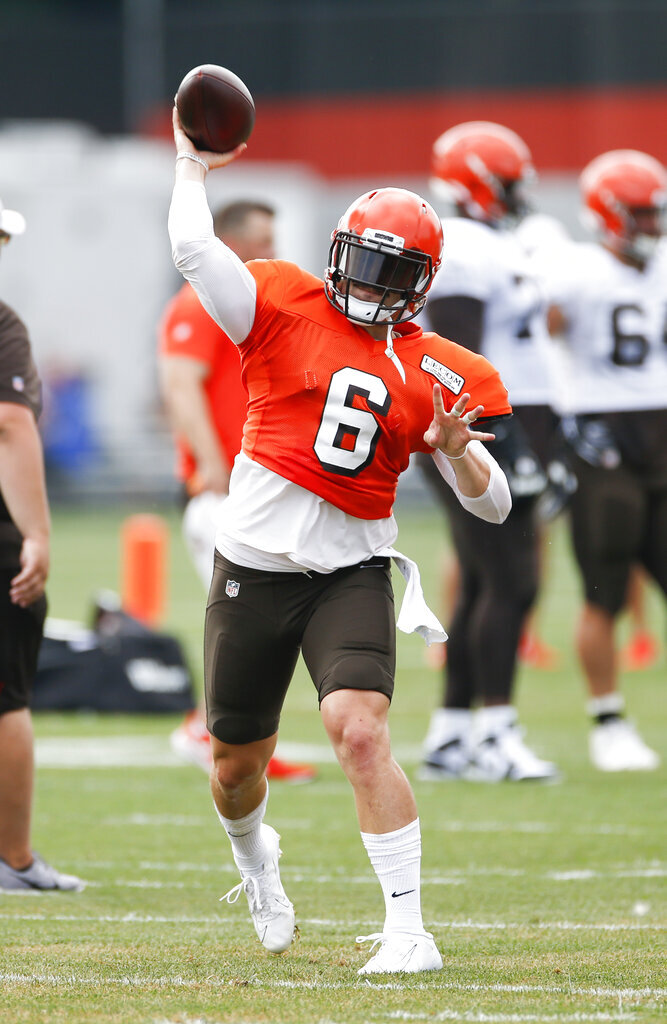 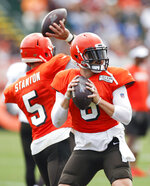 BEREA, Ohio (AP) — Baker Mayfield didn't hesitate to answer when asked what areas of his game he wanted to improve.

When the subject switched to his modified facial hair, he was far less revealing.

The second-year quarterback reveled being the center of attention Wednesday at the Cleveland Browns' training camp, unveiling an array of situational plays designed by coach Freddie Kitchens and offensive coordinator Todd Monken.

Mayfield was especially animated when his unit failed to convert simulated late-game scenarios, loudly calling out teammates while displaying the leadership that Cleveland envisioned when it made him the No. 1 overall draft pick.

"Baker is leading in his way and that's all he can do," starting left tackle Greg Robinson said. "I didn't know him from a can of paint last year, but there are some guys you can bond with and Baker is one of them. He's open and he's really friendly.

"When you get through one year, you're more talkative and have a little more fun with it."

The Oklahoma product and 2017 Heisman Trophy winner has been sharp-tongued toward his wide receivers over the first six practices, addressing Pro Bowl players like Odell Beckham Jr. and Jarvis Landry in the same manner as undrafted free agents.

Mayfield offered no apology for pointing out their mistakes in front of fans — often using adult language — because he follows up the outbursts with calm, measured conversations in the locker room.

"I'm not a (jerk), you've got to talk through it," said Mayfield, who set an NFL rookie record with 27 touchdown passes and won six games after taking the job from Tyrod Taylor in Week 3. "It's nothing personal in getting after somebody. I hope they all hold me accountable, too.

"We need to be overcommunicating right now in practice because you're not going to get two-minute drills where you have to score in the preseason."

Kitchens has instructed his coordinators to treat 11-on-11 sets like a laboratory, experimenting with concepts that might not be used when the games count. He wants Mayfield to be uncomfortable improvising now and calm later.

"We're creating an environment where it's reactionary," Kitchens said. "It's about continuing to put the quarterback in a situation to decipher, then react accordingly. You may be planning on one thing, but teams may do something totally different. It can't be a wasted play."

Robinson said adjusting to numerous defensive schemes is challenging for linemen, but he noted that Mayfield's running ability gives them some room for error.

"In a perfect world, you want him to stay in the pocket to make throws," he said. "But if you do screw up or take a bad step, you do have that mobile quarterback who can slip out and keep the play going."

The 6-foot-1, 215-pounder had 131 yards rushing last year and said he enjoys scrambling out of heavy pressure. Yet he also stressed that his primary objective is consistency, not leading the league in highlight-reel plays.

For the Browns to take the next step and make the playoffs after a 7-8-1 season, Mayfield knows he must reduce his 14 interceptions, seven fumbles and 25 sacks from 2018.

"I want to make fewer turnovers, put us in better position to score more often, less negative plays, definitely less sacks," he said. "Just really commanding the offense and putting us in the best spot to win. More wins, though, is the best individual goal I can have."