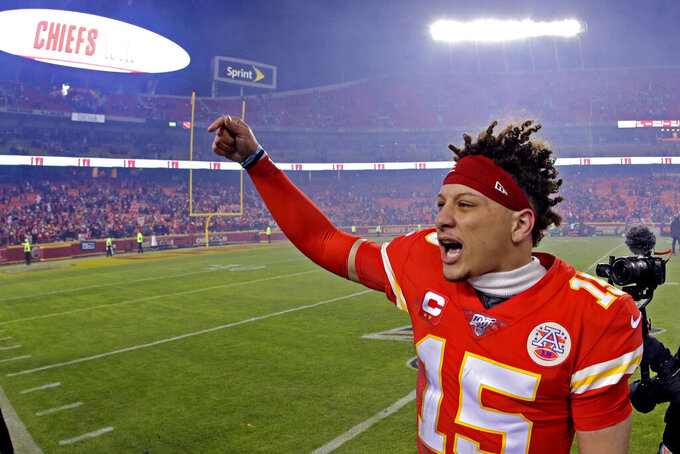 AFC: Tennessee at Kansas City, 3:05 p.m. EST. After upsetting top-seeded Baltimore, the Titans (11-7) will go after their second Super Bowl trip and first since the 1999 season. The last sixth seed to get to the big game was Green Bay in the 2010 season; the Packers won it all. Derrick Henry and the Titans will have to do it against Patrick Mahomes and the Chiefs (13-4), who rallied from a 24-0 deficit to beat Houston 51-31. Kansas City is looking for its first Super Bowl appearance in 50 years. The last time Kansas City and Tennessee met was also the last time the Chiefs were beaten, 35-32 in Nashville on Nov. 10.

NFC: Green Bay at San Francisco, 6:40 p.m. EST. Aaron Rodgers and the Packers (14-3) advanced to the NFC championship game for the third time in six years with a victory over Seattle. Green Bay last played in the Super Bowl in 2011. Jimmy Garoppolo and the 49ers romped past Minnesota 27-10 with a balanced performance, setting a franchise playoff record by allowing only 147 yards to the Vikings. The 49ers (14-3) haven't been to the Super Bowl since 2013, when they lost to Baltimore.

— Aaron Rodgers, Packers, had two touchdown passes and finished 16 of 27 for 243 yards while leading Green Bay past Seattle 28-23 on Sunday night.

— Deshaun Watson, Texans, passed for 388 yards and two touchdowns and ran for another in Houston's 51-31 loss at Kansas City.

— Derrick Henry, Titans, rushed for 195 yards and threw a 3-yard touchdown pass in Tennessee's 28-12 upset of Baltimore on Saturday night.

— Lamar Jackson, Ravens, rushed for 143 yards and the quarterback also threw for 365 yards in a losing cause as Baltimore was defeated by Tennessee 28-12.

— Travis Kelce, Chiefs, had 10 catches for 134 yards and three touchdowns - all three coming in the second quarter - to help lead Kansas City to a 51-31 comeback victory over Houston.

— Raheem Mostert, 49ers, recovered a fumbled punt by Marcus Sherels, leading to a field goal for San Francisco in a 27-10 victory over Minnesota.

— Jurrell Casey, Titans, had two sacks and a forced fumble that was recovered by Jeffery Simmons and led to a touchdown in Tennessee's 28-12 win at Baltimore.

— Za'Darius Smith and Preston Smith, Packers. Each had two sacks in Green Bay's 28-23 win over Seattle.

Kansas City became the first team in NFL history to win a playoff game by at least 20 points after trailing in that game by at least 20 points, pulling off the feat in a 51-31 victory over Houston on Sunday. ... Chiefs quarterback Patrick Mahomes is the first player in NFL history with at least 300 yards passing, at least five TD passes and at least 50 yards rushing in a playoff game. ... Tennessee's Derrick Henry became the first player with two games of 175 yards rushing or more in the same postseason after running for 195 in the Titans' 28-12 win at Baltimore on Saturday night. ... Kansas City's Patrick Mahomes threw four TD passes in the second quarter of the Chiefs' 51-31 victory Sunday, joining Washington's Doug Williams (1988 Super Bowl) as the only players in postseason history with four passing TDs in a single quarter. Chiefs tight end Travis Kelce also became the first player with three TD catches in one quarter of a playoff game in the Super Bowl era.

Baltimore's 12-game winning streak came to a crashing halt with a 28-12 loss to Tennessee on Saturday night. ... The Ravens were 8 for 8 on fourth-and-1 situations during the regular season, but Lamar Jackson went 0 for 2 against Tennessee, getting stuffed at the line of scrimmage on each occasion. Both times, the Titans went the other way for touchdowns. ... San Francisco didn't allow Minnesota to gain a first down for more than 27 minutes of game action starting late in the second quarter of the 49ers' 27-10 victory Saturday. The Vikings' 147 yards were the fewest allowed by the 49ers in a playoff game in the Super Bowl era. ... Kansas City's 41 straight points in its 51-31 win over Houston on Sunday was the most consecutive points in a playoff game since the New York Jets also had 41 against Indianapolis in the 2002 wild-card round. ... Seattle's losing streak at Lambeau Field was extended to nine straight games after a 28-23 loss to Green Bay. The last such win for Seattle was on Nov. 1, 1999.

Kansas City fell behind 24-0 against Houston early, but stormed back to win 51-31 on Sunday. The Chiefs scored 41 straight points during one stretch and became the first team in NFL history to win a playoff game by at least 20 points after trailing in that same game by at least 20.

Tennessee's Derrick Henry dominated Baltimore with his legs — and his arm —- in a 28-12 victory Saturday night. He ran for 195 yards on 30 carries and tossed a 3-yard touchdown pass, becoming the first running backs to throw for a TD in the playoffs since Minnesota's Allen Rice in 1987. Henry is the first player with two games of 175 rushing yards or more in the same postseason, and set the postseason single-game rushing record for the Titans in consecutive weeks. He also has the most yards rushing through his first four postseason games with 561, beating Hall of Famer Terrell Davis and Arian Foster, who were tied with 515 through their first four.

Baltimore quarterback Lamar Jackson put up some gaudy numbers on Saturday night against Tennessee — running for 143 yards and amassing 365 yards through the air — but also threw two interceptions, lost a fumble and failed twice on fourth-and-1 carries and led Baltimore to just one touchdown in a 28-12 upset loss. Jackson was better than in his previous playoff game, though, a wild-card loss to the Chargers last year. At halftime in that one, Jackson was 2 of 8 for 17 yards and an interception for a 0.0 quarterback rating. He came on in helping Baltimore make that one close in the second half.

Minnesota's Dalvin Cook got the ball 15 times on the day and was held to only 26 yards, gaining 18 yards on nine carries and 8 on six catches in the Vikings' 27-10 loss at San Francisco on Saturday. It's a far cry from the season, when he gained 1,654 yards in just 14 games to power the offense.

San Francisco running back Raheem Mostert (calf) and linebacker Mark Nzeocha (stinger) left in the second half of the 49ers' 27-10 win over Minnesota on Saturday. ... Kansas City sat defensive tackle Chris Jones, who strained his calf muscle late in the week and couldn't make it through pregame warmups before the Chiefs' win over Houston. WR Tyreek Hill left briefly after a hard hit but eventually returned to the game. ... Packers right tackle Bryan Bulaga, one of six players the team reported this week as being limited by illness, was active for but did not play. Wide receiver Allen Lazard hurt his ankle in the second quarter.

“I mean, it was an amazing thing. Everything was working.” — Kansas City quarterback Patrick Mahomes after the Chiefs rallied from a 24-0 deficit and scored 41 straight points en route to beating Houston 51-31 on Sunday.

“I’m just going to enjoy a nice glass of scotch tonight and get on to the film of San Fran and get ready for a tough opponent.” — Green Bay's Aaron Rodgers, who led the Packers to a 28-23 win over Seattle and set up an NFC title game matchup next Sunday at San Francisco.

“I put it perfect, man. I haven't done that pass since high school. I feel l like I still got it.” — Tennessee running back Derrick Henry on his 3-yard touchdown pass to Corey Davis in the Titans' 28-12 win at Baltimore.

“We knew we were facing probably the best back we've faced all year with Dalvin (Cook), and we knew we had to earn the right to pass rush. So, that's what we did. We took the run as serious as we could, shut it down and then we ate.” — San Francisco defensive lineman Nick Bosa after the 49ers defense shut down Minnesota's offense in a 27-10 victory.