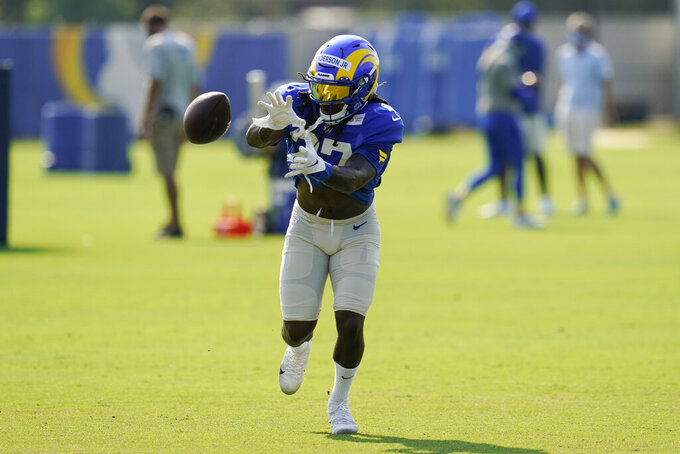 LOS ANGELES (AP) — Los Angeles Rams running back Darrell Henderson has a hamstring injury that could hamper his chances to contend for the starting job.

Rams coach Sean McVay announced the nature of Henderson's injury Sunday, a day after the running back was hurt during the team's first scrimmage at new SoFi Stadium.

Henderson's injury is “mild,” according to McVay, but the second-year pro is likely to miss practices this week.

“We'll be excited when we can get Darrell back on the field, but it is an unfortunate setback for him,” McVay said.

Henderson is in a three-way competition to become the Rams' successor to former All-Pro Todd Gurley, who was released in a cost-cutting move last March after five prolific seasons in the backfield. Henderson is competing with longtime Rams backup running back Malcolm Brown and rookie Cam Akers.

Henderson was a third-round pick out of Memphis last year. He rushed for 147 yards in inconsistent action as a rookie.

Akers is the Rams' second-round pick out of Florida State. He played extensively in the Rams' scrimmage, making good plays but also fumbling.

Brown is beginning his sixth season with the Rams after playing behind Gurley during their first five NFL seasons. Brown rushed for a career-high 255 yards with five touchdowns last season.

McVay also said he is optimistic that starting safety Taylor Rapp will participate in training camp this week. Rapp has yet to practice with the Rams in camp due to a knee injury.

McVay canceled practice Sunday after the Rams ran more than 150 plays in Saturday's scrimmage. The players have the day off Monday.