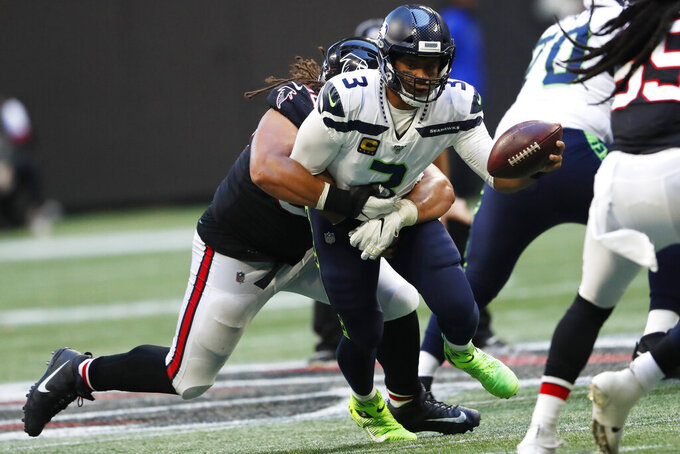 SEATTLE (AP) — With what lies ahead, the Seattle Seahawks better enjoy what appears to be the final "easy" week on the schedule.

The Seahawks have started 6-2, are in the middle of the NFC playoff race and will host struggling Tampa Bay on Sunday. Seattle's first half of the season has put it in the playoff conversation and could have the Seahawks in contention for a division title, eventually.

But the visit from the Buccaneers is a scary matchup and the last appetizer on Seattle's schedule that becomes incredibly difficult over the final seven games.

"It isn't just getting to the halfway point, it's what you're going to do about it," Seattle coach Pete Carroll said. "That's all gone and done with. Now this is when the run to the finish is under way."

Seattle has feasted on the lower tier of the league in getting to six wins. It owns only one win over a team with a winning record. Five of its six wins are by one score, with a 17-point win at Arizona its only comfortable victory. Between the easy schedule and the margins of victory, Seattle hasn't proven much in its six wins.

But it'll have plenty of opportunity over the final two months.

After facing the Bucs, six of Seattle's final seven games come against teams currently with .500 or better records. That includes two games against San Francisco and road trips to Philadelphia, the Rams and Carolina.

"I like the spot that we're at," Seattle linebacker Bobby Wagner said. "There's been situations or games where we've been 4-4, or a lot worse records. So sitting at 6-2 with a chance to improve and really take off defensively, I like our chances."

The cross-country trip is the end of a long stretch away from home for the Bucs. Tampa Bay (2-5) has lost three straight and hasn't played a game in its own stadium since Week 3. Turnovers continue to be a nagging problem in Bruce Arians' first year in charge.

The Bucs had seven turnovers in their Week 6 loss to Carolina and had four last week in a 27-23 loss at Tennessee. The Bucs were also upset after being denied what would have been a go-ahead touchdown in the closing minutes when an official's quick whistle negated a fumble safety Andrew Adams returned for a TD with just under four minutes remaining.

"Just having the game and giving it away. It's time to stop," Arians said. "I think they all feel that, and it's a very good feeling as a coach to come back on a plane that's angrier about losing."

Seattle will experience a massive change on its offensive line with veteran center Justin Britt out for the season with a torn ACL in his knee. Joey Hunt will make his third career start at center and his task will be significant trying to make protection calls while handling the defensive line duo of Ndamukong Suh and Vita Vea. Suh and Vea are big reasons why Tampa Bay has the best run defense in the league giving up just 68.6 yards per game.

"It wouldn't matter who is playing center with Vita Vea over there on the other side. He's a remarkable player," Carroll said.

Arians has a 4-1 record as a head coach at CenturyLink Field from his time as the head man for the Arizona Cardinals. The 67-year-old enjoys the raucous atmosphere of one of the league's toughest venues for road teams and has been known to refer to the Seahawks' stadium as "my house" because of the success his teams have experienced in Seattle.

Seattle is just 2-2 at home this season.

"It's kind of odd because when we played them every year, they'd beat us at home and we'd beat them up there," Arians said. "A lot of those games were really close games that we won at the end. If you can hang in there with the crowd and the environment and everything that's so unique about the place, and don't get overwhelmed, you'll have a chance to win the game."

Russell Wilson has been great for most of the season, but the one hiccup in his otherwise stellar first half came in his previous home game against Baltimore. Wilson threw his only interception so far this season in the 30-16 loss to the Ravens, which was returned for a touchdown by Marcus Peters. Wilson was just 20 of 41 for 201 yards in that game and it's his only game this season with a passer rating under 102 and a completion rate below 64 percent.

Whether Seattle can contain Tampa Bay wide receivers Chris Godwin and Mike Evans will be a big key. The Seahawks allowed 460 yards passing to Atlanta's Matt Schaub last week. Jameis Winston is more than capable of just as big a day through the air with Evans and Godwin. The pair has combined for 85 receptions and 12 touchdowns in just seven games.