Seahawks shaky pass D could be without both starting CBs 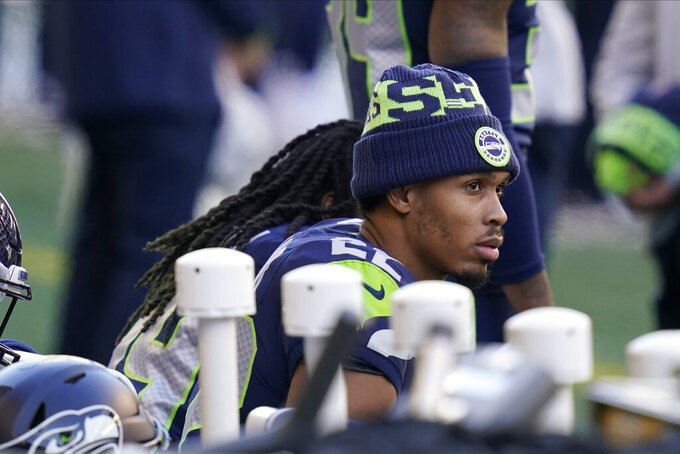 Seattle Seahawks cornerback Quinton Dunbar sits on the bench during the national anthem before an NFL football game against the San Francisco 49ers, Sunday, Nov. 1, 2020, in Seattle. (AP Photo/Elaine Thompson)

RENTON, Wash. (AP) — Already the worst pass defense in the NFL, the Seattle Seahawks could be down both of their starting cornerbacks for Sunday’s game at the Los Angeles Rams.

Seattle may be without Shaquill Griffin and Quinton Dunbar against the Rams this week. And facing a short turnaround with a game against Arizona on Nov. 19, it also raises the question of whether either would be ready to go versus the Cardinals.

Griffin has missed the past two games with a combination of a concussion and a hamstring injury, both of which were suffered in Week 7 against Arizona. Griffin has cleared the concussion protocol, but the hamstring is limiting his availability.

Dunbar has a knee injury and Seattle coach Pete Carroll sounded pessimistic without giving a specific diagnosis on Wednesday.

“Quinton’s knee has bothered him for some time and last weekend for sure, so we have to attend to that,” Carroll said.

When asked if Dunbar would play this week, Carroll said, “I don’t know that yet.”

No matter who has been in Seattle’s secondary this season, the results have been eye-opening in a negative way. Seattle enters the week as the worst pass defense in the NFL, giving up 362 yards per game through the air and is on pace to shatter the NFL record for most passing yards allowed in a season.

Even when there are positives for Seattle’s defense, it comes with a cost. Last week, the Seahawks had seven sacks against Buffalo, the most for Seattle in a regular-season game since 2013. But in the process of getting those seven sacks the Seahawks were exposed on the back end. Josh Allen became one of five quarterbacks in league history to throw for more than 400 yards in a game where he was sacked at least seven times. Allen was just the second to win a game under those circumstances, joining Joe Montana.

The awful performance defending the pass against Buffalo came a week after Seattle appeared to be making progress defensively by stifling San Francisco for three quarters.

“Especially for myself it’s frustrating because you felt like you were moving in the right direction and then kind of have a setback,” Seattle linebacker Bobby Wagner said. “You allow the frustration to happen and then try to find ways to get better. That’s really how you have to do it. We don’t have time to sit here and think about the past. We’ve got to get right and we’ve got to do better.”

If both Griffin and Dunbar are out, Seattle will be scrambling to fill one of its cornerback spots. Tre Flowers started the past two games with Griffin out and was the one player in Seattle’s secondary to play well against the Bills.

The other starting cornerback spot could be a hodgepodge of players, including D.J. Reed, Linden Stephens and Ryan Neal. Reed has played nickel cornerback the past two weeks, but could move outside with Ugo Amadi expected back from a hamstring injury. Stephens played 15 snaps last week late in the game.

No matter who Seattle rolls out there, defensive coordinator Ken Norton Jr. said the performance through the first half of the season is unacceptable.

“I don’t think any of us had thought at this point that we’d be playing like we are,” Norton said. “I don’t think anybody; as hard as we work, guys in here early, staying late, putting in the time. The numbers aren’t nowhere where we expected to be. Some things are going well, a lot of things aren’t.”

NOTES: Seattle is still uncertain about the status of both RBs Chris Carson (foot) and Carlos Hyde (hamstring). Carroll said Carson is ahead of Hyde in the recovery, but was unsure if either would have a chance of playing this week. ... DT Damon “Snack” Harrison has a good chance of making his debut for Seattle this week. The Seahawks have a need at defensive tackle with Bryan Mone expected to miss some time with a high ankle sprain.