Steelers LB Bush expects to be ready for training camp 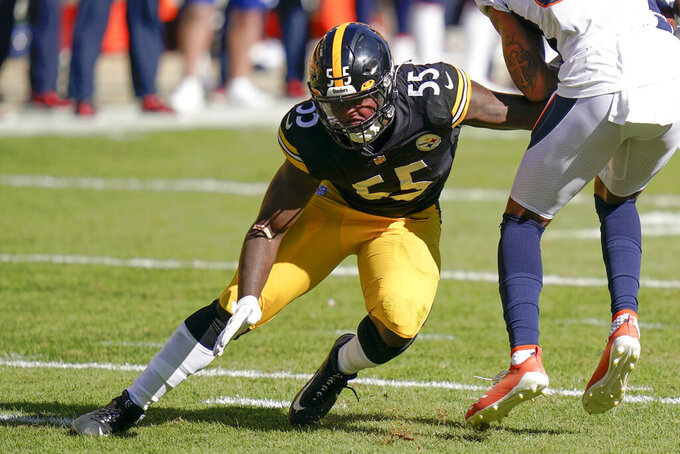 File-This Sept. 20, 2020, file photo shows Pittsburgh Steelers linebacker Devin Bush (55) playing against the Denver Broncos during an NFL football game, in Pittsburgh. Bush says his reconstructed knee will be ready for minicamp. The inside linebacker's rookie season was cut short in 2020 when he went down Oct. 18 against the Browns. (AP Photo/Keith Srakocic, File)

The inside linebacker doesn't expect that to change once he's fully cleared to return from a torn ACL in his right knee that cut short his second year in the NFL.

Bush didn't miss a defensive snap last season until he took an awkward step against Cleveland on Oct. 18, tearing his ACL in the process. While estimating he's at 80-90% in terms of his recovery, he plans to be an every-down player whenever he returns.

“I’m ready for it,” Bush said Wednesday. "It’s definitely something I’m going to have to adjust to coming off injury. But I’m looking forward to playing 100 percent of the snaps.”

Something he did in 2020 until that fateful play against the Browns. Bush was in coverage against Cleveland's D'Ernest Jackson when his right knee gave out as a pass fell incomplete. He hobbled to the medical tent and then out of sight until organized team activities began last month.

Bush underwent surgery and has spent most of the last nearly eight months in Pittsburgh, in part so the team can keep close tabs on his recovery. Things appear to be right on schedule. Bush spent a portion of the day Wednesday dragging a 50-pound weight behind him during an 80-yard run.

The 22-year-old formr Michigan star is still limited to independent work for now, though he anticipates being ready to go when the Steelers report for training camp at Saint Vincent College next month. A lot of his training now is focused on reading and reacting. No need for contact, even the limited kind held during OTAs.

“They’re holding me out of competition because it’s not needed right now,” he said.

The Steelers are hoping Bush's return will help shore up a run defense that faltered late in the season following injuries to Bush, outside linebacker Bud Dupree and inside linebacker Rob Spillane. Pittsburgh allowed 66.2 yards on the ground with Bush in the lineup and 116.2 with Bush out.

That makes finding a way to shore up the middle of the field vital, particularly in a division that features run-heavy teams like Baltimore and Cleveland.

“That’s always something in football, you never want to leave the middle of the field open. It’s the easiest throw. Easiest run play,” Bush said. "You can call anything if the middle is open. It’s just the ability to play stout. Be on the same page and play fast.”

Bush expects to retain the sideline-to-sideline speed that made the Steelers trade up to select him with the 10th overall pick in the 2019 draft.

Asked if he could handle covering Cleveland wide receiver Jarvis Landry in the slot, Bush offered a brief and blunt assessment.

When he gets there, it will mean the most difficult year of his still very young career will be firmly in the rearview mirror.

“It was hard not being able to play football, not being out with your teammates,” Bush said. "It’s always going to be hard to sit back and watch as a competitor. It’s something I went through and I dealt with and it’s in the past now.”

NOTES: WR JuJu Smith-Schuster said his decision to stay in Pittsburgh on a one-year deal rather than leave in free agency was about loyalty. Smith-Schuster turned down opportunities to play in Baltimore and Kansas City to remain with the team that selected him in the second round of the 2017 draft. The 24-year-old also acknowledged it makes financial sense too. The salary cap is expected to take a significant leap next year after going down in 2021. Smith-Schuster said there should be more lucrative opportunities down the road if he hits the open market next spring.