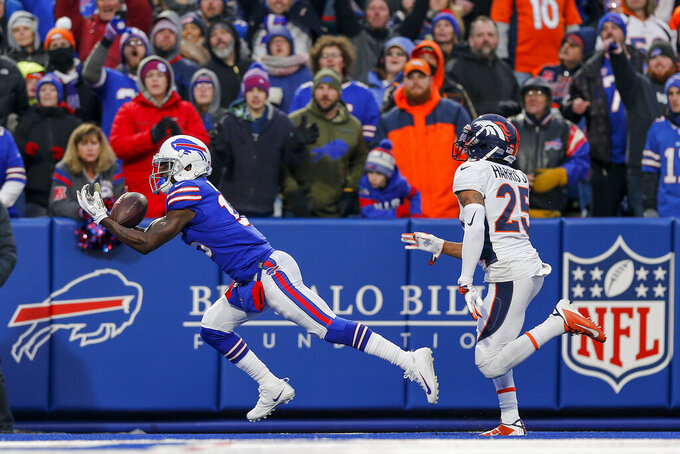 Their rivalry provides one of the more intriguing plot lines Sunday when the bumbling Los Angeles Chargers (4-7) visit the bungling Denver Broncos (3-8) in a matchup of AFC West also-rans.

Denver’s star cornerback was primarily responsible for checkmating the Chargers’ star wideout last time the teams met in Week 5, when Harris helped hold the league's top receiver at the time to 18 yards on four catches in a 20-13 Broncos victory.

Afterward, Allen voiced his displeasure over his stat line on social media, commenting on an Instagram post of a Chris Harris Jr. fan account: "Now, y'all know damn well that boy can't hold my jockstrap. Stop it."

Allen confirmed those comments in the locker room later that week, suggesting reporters "just watch the tape" for proof.

That tape showed Allen held in check, catching four of the six passes Philip Rivers threw him that day, when the Chargers failed to score an offensive touchdown.

Harris brushed aside Allen's disrespect with a shrug, suggesting he had no idea what Allen was talking about.

"I've locked him up numerous times. I don't even know how many times I've shut him down," Harris said back in October. "There's nothing to really talk about with him. I'm ready for Tyreek Hill."

The episode was raised again this week ahead of the rivals' rematch, and Harris again threw shade on his opponent who belittled the Broncos' last-second 23-22 win in Los Angeles last year by proclaiming, "They suck."

"It's always different when we play the Chargers," Harris said. "It's a rivalry game. Of course, he was talking a lot of mash last game, so everybody is going to be tuning into our matchup. But it's about the team. We've got to go out there and prepare as a team, have a great preparation this week and get ready for Rivers."

Other subplots in the 121st edition of the AFC West rivalry:

Rookie Drew Lock shared snaps with fill-in quarterback Brandon Allen at practice during the week following Allen's poor performance at Buffalo, where he completed 10 passes for 84 yards in a 20-3 loss. Allen replaced Joe Flacco (neck) at the season's midpoint, becoming Denver's sixth starting quarterback since Peyton Manning's retirement in 2016. The Broncos' 134 yards of total offense were the lowest in the NFL in 26 years.

The Chargers are finally getting things together at safety, where Adrian Phillips has been out since breaking his right forearm during the fourth quarter of a Week 2 loss at Detroit. Derwin James sustained a stress fracture in his right foot during joint practices with the New Orleans Saints on Aug. 15. Despite not having James and Phillips for most of the year, the Chargers are fifth in the league in defense and fourth against the pass.

Rivers has thrown seven interceptions in his last two games, the worst slump of his 16-year career. Rivers had the ball and a chance to avoid defeats in both games, a 26-24 loss at Oakland and a 24-17 loss to the Chiefs in Mexico City. Both times he ended the Chargers' chances with interceptions. Safeties Karl Joseph of the Raiders and Daniel Sorensen of the Chiefs both picked him off in the final half-minute.

Von Miller limped out of Buffalo, but Broncos coach Vic Fangio insisted it was nothing major. Miller appeared to prove that point by frolicking in the frosty weather Tuesday. He was shirtless and in shorts as he walked across the players' parking lot to the weight room despite a storm that dumped more than a foot of snow. Then he flexed into the reflective glass. However, Miller did miss his second Wednesday workout this season.

Broncos inside linebacker Alexander Johnson's debut against the Chargers in Week 5 featured two pass breakups, an interception and eight stops. He now has 61 tackles, including a career-best 15 at Buffalo last week.

"Every week you can see him picking up the scheme better and better and learning his assignment and his job," safety Justin Simmons said. "He's playing fast and physical. ... He causes so much gray area for the quarterback that it makes our job that much easier in the back end."