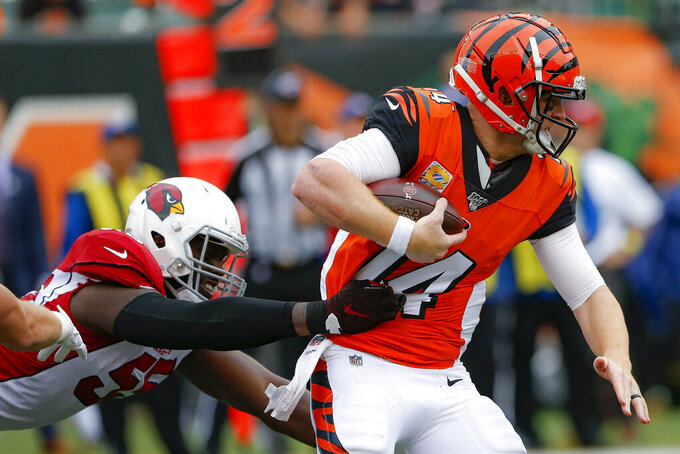 CINCINNATI (AP) — Paul Brown Stadium was more than half-empty when the Bengals pulled off a stunning comeback to tie the game and give themselves a chance for that long-awaited first win.

After a couple of minutes and a few more boos, the rest of the fans piled out, too.

A 26-23 loss to the Arizona Cardinals on Sunday left Cincinnati 0-5 for the first time in 11 years. And it's not like fans hadn't seen it all before. It's the seventh time Cincinnati has opened 0-5 since 1990, the most in the league over that span.

The Bengals haven't won a playoff game since that 1990 season, tied with Washington for the fifth-longest streak in league history. They're on the verge of moving up that list one more rung.

"We understand the position we're in," quarterback Andy Dalton said.

What made this loss sting was the way the Bengals came alive at the end only to give it away. Dalton ended the Bengals' streak of seven quarters without a touchdown by throwing two and tying the game 23-23 with 2 minutes left. But rookie Kyler Murray led the Cardinals (1-3-1) in position for Zane Gonzalez's 31-yard field goal on the final play.

"I'm sick of losing," said receiver Tyler Boyd, who caught a 42-yard touchdown pass to tie it. "Sick of not finishing the game we want to."

After three straight losing seasons, the Bengals fired Marvin Lewis and hired Zac Taylor. They drew only 50,666 fans for their home opener, a 41-17 loss to San Francisco. Coming off a 27-3 loss in Pittsburgh on Monday night, the Bengals sold only 46,012 tickets for Sunday's game.

It's the second time in three games that the Bengals allowed a late drive to determine the game. Frank Gore had a 1-yard touchdown run with 1:50 left to give Buffalo a 21-17 win two weeks ago. On Sunday, Murray completed a 24-yard pass and ran 24 yards to get the Cardinals in position for their first win under new coach Kliff Kingsbury.

"I think this and the Buffalo one hurt the most," safety Jessie Bates said.

It wasn't all on the defense.

Dalton was sacked a career-high eight times in the loss at Pittsburgh. The Bengals decided to run the ball and throw quick passes against the Cardinals to avoid sacks, and Dalton was dropped only once.

On Cincinnati's first drive, Joe Mixon carried eight times for 60 yards, but Cincinnati had to settle for a field goal. Arizona adjusted to the run-based focus, and the Bengals managed only 43 yards rushing the rest of the way. Dalton threw for only 22 yards in the first half and Cincinnati managed 90 yards overall.

Yet Dalton threw TD passes of 2 and 42 yards on consecutive possessions as Cincinnati tied it with 2 minutes left after going virtually all game without much out of the passing game.