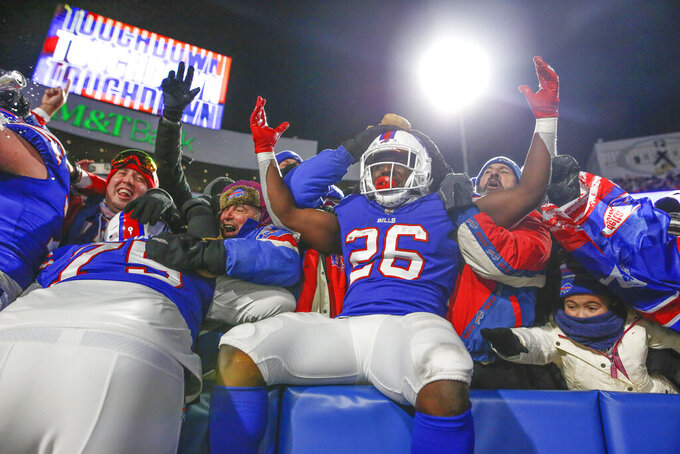 ORCHARD PARK, N.Y. (AP) — Safety Jordan Poyer and the Buffalo Bills persevered through a bumpy season to put themselves in a position to win their second consecutive AFC East title.

Not the gusting winds, the many doubters they’ve picked up, and especially not the injury depleted New York Jets were going to stand in their way from completing the job of clinching Buffalo's first division title at home since 1995 on blustery Sunday.

Devin Singletary sparked a sputtering offense by scoring twice in the final 8:21, the defense limited the Jets to a franchise-low 53 yards of total offense, and Cam Lewis even blocked a punt in a 27-10 victory.

In essentially bookending their season with a four-game winning streak to match their 4-0 run from Weeks 2-5, the Bills (11-6) enter the playoffs as the conference’s third seed and will host division-rival New England in a wild-card playoff on Saturday night. It will mark their third meeting in seven weeks and after the teams split the regular-season series by each winning on the road.

With their opponent not decided until the Las Vegas Raiders defeated the Los Angeles Chargers 35-32 in overtime, quarterback Josh Allen was already looking forward no matter which team Buffalo faced. In making their third consecutive playoff appearance, the Bills have unfinished business a year after their deepest playoff run in 27 years ended with a loss to Kansas City in the conference championship game.

“Nobody at the end of their career looks back and really figures out how many times you won your division. I think the main goal is the Super Bowl,” Allen said. “It’s great, it’s fine, hats and shirts are cool. But at the end of the day, we've got a lot more work to do.”

Buffalo's defense led the way by setting a franchise record in limiting New York to generating four first downs and sacking rookie Zach Wilson nine times, the most by Buffalo since getting 10 in a 23-0 win over Washington on Oct. 20, 2011.

The outcome, however, wasn’t decided until the final quarter on an afternoon in which wind gusts of up to 30 mph played havoc with the passing and kicking games.

Singletary put the Bills up 20-10 by scoring on a 1-yard run to cap a seven-play 51-yard drive with 8:21 remaining. He followed that by catching a 5-yard TD pass.

The Jets (4-13), under first-time head coach Robert Saleh, completed their sixth consecutive losing season — and fifth with five or fewer wins in extending their playoff drought to a franchise record-matching 11th consecutive year. It’s also the longest active streak in the NFL.

Credit the Jets for not running for the bus in having long ago been eliminated from playoff contention. While their offense sputtered, the Jets defense held Buffalo to 13 points and forced five three-and-outs through three quarters.

“I’m not discouraged at all, just because of this performance from our offense. I think our offense has done a lot of great things. Obviously just ran into a little bit of a buzz saw with this Buffalo defense,” Saleh said, noting two of New York's wins came against division champions in Tennessee and Cincinnati.

“While the four-win season is not good enough, it’s very encouraging to go into next year, and something that I feel like we can build on,” he added.

While the Bills celebrated with the fans following the final whistle, security officials dismantled the goalposts in the west end, while guarding the goalposts on the other side of the field.

Allen was 24 of 45 for 239 yards and two touchdowns, including a 10-yard touchdown pass to Stefon Diggs on Buffalo’s game-opening drive.

Keelan Cole cut Buffalo's lead to 10-7 on a 40-yard touchdown catch, which came after Buffalo's Matt Haack managed a 21-yard punt into the wind. Eddy Pineiro then hit a 49-yard field goal after Haack bobbled a snap that nearly sailed wide, and the punter managed to get a piece of the ball to advance it only 7 yards.

Except for allowing the TD, the Bills defense was locked in.

“We’ll defend a blade of grass,” defensive tackle Harrison Phillips said. “Put the ball on the 1-yard line and we’re anxious and excited to go out there champing at the bit to go get out on the field.”

The Jets’ offense was depleted by injuries in missing receivers Elijah Moore (quadriceps), Corey Davis (core muscle) and Braxton Berrios (quadriceps), and then lost Jamison Crowder in the second quarter to a calf injury.

Wilson finished 7 of 20 for 87 yards. The No. 2 draft pick finished the season not throwing an interception over his final five games.

Haack's 42-yard punt midway through the second quarter was his first kick since a 40-yarder with 10 minutes remaining in a 31-14 win over Carolina on Dec. 19.

The Bills went the next two games not attempting a punt and were in position to become the NFL’s first team since at least 1945 to go three consecutive games without attempting a punt. Haack’s next two punts, following consecutive three-and-outs, went 21 and 23 yards into winds gusting at between 20 and 30 mph.

Bills: Host the Patriots for only the second time in the postseason. The then-Boston Patriots defeated Buffalo 26-8 in an American Football League divisional playoff on Dec. 28, 1963.