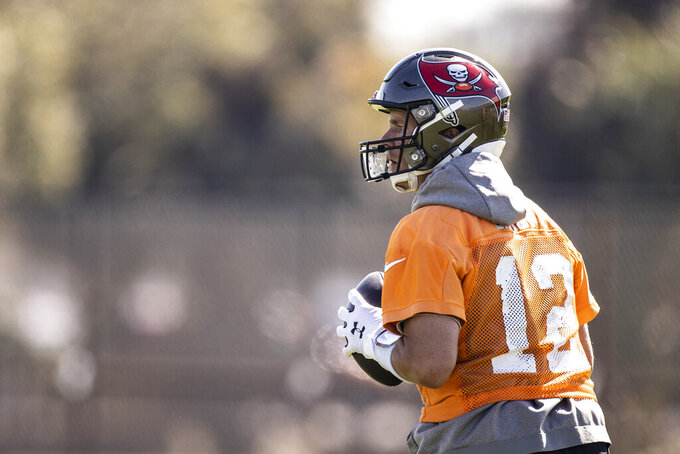 The 43-year-old six-time Super Bowl champion may no longer be the best quarterback in the NFL, however, he’s shown in his first season with the Bucs that he’s still good enough to lead a team to the NFL title game.

And the way Tampa Bay’s defense has played since Patrick Mahomes manhandled it in Week 12 of the regular season gives the NFC champions confidence that Sunday’s rematch with the defending Super Bowl winners will be different.

Brady and the Bucs haven’t lost since falling to the Chiefs 27-24 on Nov. 29, rattling off seven consecutive wins on the way to the franchise’s first appearance on football's biggest stage in 18 years.

This is exactly what general manager Jason Licht and coach Bruce Arians had in mind when — coming off a 7-9 finish and hoping to end a 12-season hiatus from the playoffs — they signed the former New England Patriots star to a two-year, $50 million contract in free agency.

“Naturally, I think you envision it every year in the offseason. You want to make some moves that hopefully get your team into the Super Bowl. I think when you sign a guy like Tom, it makes it a little more realistic,” Licht said.

“Just talking to him the days after we signed him, you could just hear and feel the confidence that he had,” the GM added. “It made it a little bit more real.”

Arians has also worked with Peyton Manning, Ben Roethlisberger, Andrew Luck and Carson Palmer during a long coaching career in which he’s developed a reputation as a quarterback whisperer. He said what sets the great QBs apart from others is a unique passion to win.

“They have the ability to will themselves on other people to make sure that everybody has bought in to the cause. The cause is a ring, putting a championship in your trophy case,” Arians said. “Tom brings that attitude every single day and it permeates through the entire locker room.”

And has since Day 1.

“This man has been to a lot of these before, so most definitely coming in we knew we had a shot at all these goals. We were taking it week by week, but we definitely knew with a leader like that, and the guys that we had in place already, that the sky was the limit,” third-year running back Ronald Jones said.

“And, here we are,” Jones added. “They definitely spoke it into existence and we did the things we had to do to make it happen.”

But Licht didn’t stand pat in his determination to transform the offense into a high-scoring outfit capable of putting up enough points to keep pace with Kansas City’s high-octane attack led by Mahomes, All-Pros Tyreek Hill and Travis Kelce.

The GM traded for Rob Gronkowski after Brady lured his former Patriots teammate out of retirement, then solidified the offensive line that protects Brady by drafting tackle Tristan Wirfs. Running backs LeSean McCoy and Leonard Fournette, and eventually receiver Antonio Brown, were added to the mix, too.

That’s a lot of firepower.

But ultimately, what will make the difference Sunday is the team's commitment to keeping an improved defense together.

Mahomes lit up the Bucs with 462 yards passing, including 13 completions to Hill for 269 yards and three touchdowns, during the Chiefs' win in Week 12. But Tampa Bay’s defense has made strides over the past two months, building confidence and playing its best during a playoff run that includes wins over Drew Brees and Aaron Rodgers.

Taking down Mahomes won't be easy, but it's not impossible.