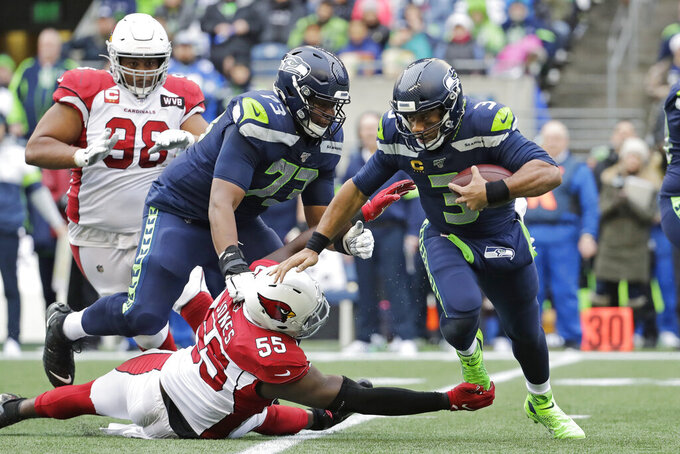 SEATTLE (AP) — For a place that's been difficult for others to solve, the Arizona Cardinals seem to enjoy their late-season trips to the Pacific Northwest.

And this time, they did it with their franchise quarterback watching the final 1 1/2 quarters from the sideline.

“This is our home away from home,” Arizona cornerback Patrick Peterson said. “The atmosphere here is always a playoff atmosphere. The fans are always into the game. The DJ is always rolling. There's nothing like coming to CenturyLink and winning.”

The Cardinals won for the fifth time in their past seven trips to Seattle with a dominant 27-13 win over the Seahawks on Sunday. Kenyan Drake ran for 166 yards and two touchdowns, Larry Fitzgerald caught a 21-yard touchdown pass, and Arizona rolled despite Kyler Murray suffering a hamstring injury midway through the third quarter and being stuck on the sideline.

The Cardinals put together their most impressive victory of the season a week after snapping a six-game losing streak with a romp over Cleveland.

“Since we got back from the bye week, really had a bad outing — worst of the year — and then since then, guys made a decision to get back to the grind and finish this thing out the right way,” Arizona coach Kliff Kingsbury said. “It's a show of the focus and the hard work paying off, and to knock off the top seed in the NFC, you can point to that and try to build off it moving forward.”

Murray said he started to feel tightness in his hamstring and didn't want to take any risks. Murray's final play was a 4-yard scramble that was followed by a 46-yard field goal by Zane Gonzalez that gave the Cardinals a 20-7 lead.

Murray was 11 of 18 for 118 yards and a touchdown before leaving. He also added 40 yards rushing. His best play was the touchdown to Larry Fitzgerald that gave the Cardinals a 14-7 lead. Murray scrambled from the pocket, stopped before the line of scrimmage and flipped a short pass. Fitzgerald managed to corral the pass with one hand, then ran through Seattle’s K.J. Wright near the goal line for the touchdown.

“Larry's a freak, so he's got the wherewithal to understand how I'm throwing the ball," Murray said. "We were pretty close to each other so that was the crazy thing that he actually could tip it himself, catch it and continue to run.”

For Fitzgerald, it was a record-setting trip to Seattle it what could his final season. Fitzgerald had four catches for 48 yards and became only the second player to go over 17,000 yards receiving, joining Jerry Rice.

“I knew I was close. I'm a long way behind Jerry,” Fitzgerald said.

Brett Hundley took over for Murray and the backup QB in Seattle last year led Arizona on a key scoring drive midway through the fourth quarter. Hundley had a critical 14-yard scramble on third-and-2 and Drake capped the drive with his second touchdown run.

Drake's 166 yards were the most this season against Seattle and included an 80-yard TD run in the first quarter. Drake had 137 yards and four touchdowns last week.

“I'm only as good as the people around me, so everybody around me is going out there and playing great ball," Drake said. "We're being very physical at the point of attack.”

And yet Drake's career-best day on the ground might not have been the most impressive performance by the Cardinals.

Chandler Jones was part of a defensive effort that made the day miserable for Seattle quarterback Russell Wilson. Jones had four of Arizona's five sacks and also forced two fumbles. Jones set a single-season franchise record for sacks with 19 for the season, topping the 17 he had in 2017. Jones now has 60 sacks in 63 career games since joining the Cardinals.

“He's been phenomenal,” Kingsbury said. “I think if we had a better record, I think he'd be in the conversation for defensive player of the year and should be. He's phenomenal.”