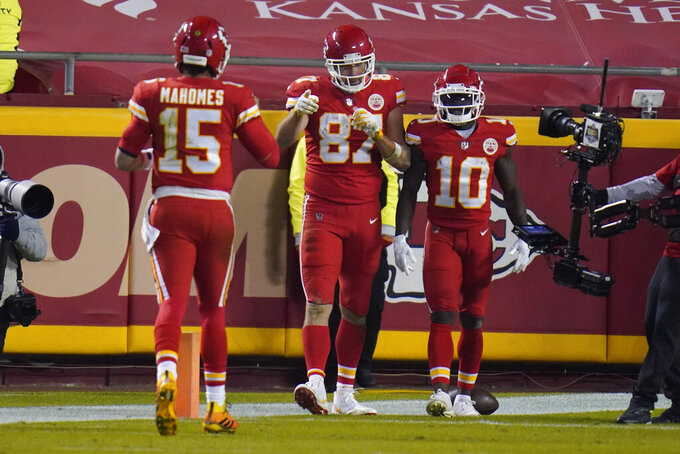 KANSAS CITY, Mo. (AP) — Patrick Mahomes grew up in baseball parks, tagging along with his big leaguer father and spending plenty of time on the diamond himself, often goofing around by slinging the ball sidearm and sinker-style along with traditional pitching.

Who knew those summer afternoons would serve him so well in an entirely different sport?

One of the things that has made the Kansas City Chiefs' quarterback so dynamic is his ability to unload a pass to his deep and talented group of wide receivers from seemingly impossible spots.

He's thrown touchdown passes sidearm, like a third baseman quickly unloading across the diamond, and underhand, like a second baseman starting a double play, along with those deep downfield throws on which his mechanics are as finely tuned as those of his new Ferrari.

“Every week you guys ask me about a record here or there, so I think he's cooking pretty good,” Chiefs coach Andy Reid said with a grin. “I'd like to eat some of the stuff he's cooking if we're going analogies here, because it looks pretty good.”

The numbers don't lie: He's already thrown for at least 300 yards in a game eight times, and his 25th such game in last week's win over Denver broke a tie with Trent Green for the most in franchise history. He's thrown 36 touchdown passes, trailing only Aaron Rodgers and Russell Wilson for the league lead, and his two interceptions — in 463 attempts, mind you — are the fewest of any quarterback in the league that has attempted at least 100 throws.

So many of those yards and touchdowns have been thanks to his seemingly supernatural throwing ability.

The Chiefs have been forced to use makeshift offensive lines all season because of injuries and COVID-19 fallout, which hit before the season even began when Laurent Duvernay-Tardif and rookie Lucas Niang opted out. The result is that Mahomes has been hurried 50 times, third-most in the NFL, yet has only had nine pass attempts batted at the line.

The reason for that? His quick release from so many angles allows him to squeeze the ball through the smallest of holes.

“The guys do a great job of working for me. I think that's the big thing,” Mahomes said. “I mean, I can scramble and throw it however I want and if the guys aren't open, then the plays won't work. So you see these guys continue to play the play out, they play until the whistle's blown, and then they get back and do the same thing the next play.”

“It helps out a lot that those guys do that,” Mahomes added, “because there's some plays that I scramble for a long time and they don't get the ball, so they have to make sure they're playing every single play with the expectation that they're going to get the ball thrown their way.”

Mahomes' ability alone is enough to give heartburn to Dolphins coach Brian Flores, who got to see him in action during his time in New England and will see him again Sunday. But throw in the supporting cast and, well ...

“I wish we could have 14 defenders. That would be nice,” Flores said. “They are hard conversations. Do we man them? Do we zone them? Do we blitz them? Andy has every play in the history of the National Football League. They run option, they run RPOs, they missile-motion you. It's not going to be easy. You guys can have fun with that. We'll do our best to try to get them covered and get them matched up.”

Then hope for the best.

NOTES: Hill and OL Yasir Durant missed practice Wednesday with the flu. LB Damien Wilson also missed the workout with a knee injury. ... Mahomes landed on the cover of Sports Illustrated this week as its “Sportsperson of the Year” for his on-field play and charitable work off the field. “It's a tremendous honor to be part of that group of people that have made such an impact in this world,” he said. “I'm super excited, super thankful they named me that, but the fight is not done. We need to continue making an impact in this world every single day.”