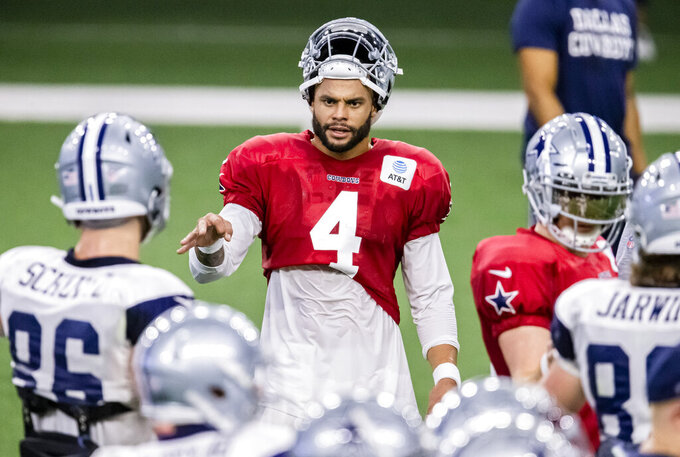 FRISCO, Texas (AP) — Dak Prescott says he was already feeling the emotional burden of the pandemic when the star quarterback of the Dallas Cowboys received word that one of his brothers had died by suicide in the spring.

Prescott acknowledged the cause of Jace Prescott’s death for the first time in a recent TV interview set to air this weekend. On Thursday, Prescott told reporters who cover the team he sought help from family, coaches and teammates past and present and sports psychologist Chad Bohling of the New York Yankees. Bohling has been an adviser to the Cowboys.

“When you have thoughts that you’ve never had, I think that’s more so than anything a chance to realize it and recognize it, to be vulnerable about it,” Prescott said. “Was able to have those conversations and then reach out further just to more people. I think being open about it and not holding those feelings in was one of the better things for me.”

The Prescott brothers endured the death of their mother, Peggy, who died of colon cancer when Dak Prescott was a sophomore at Mississippi State in 2013.

Dak Prescott said he knew Jace Prescott bore the greatest burden as their mom’s primary caregiver while she battled cancer. Jace Prescott died at 31 in the southeast Texas city of Orange in April.

The youngest of three brothers, Dak Prescott said the pandemic was a struggle because he’s a people person who thrives through interacting with and trying to inspire others.

Fox sports commentator Skip Bayless criticized Prescott’s admission, saying on his TV show he had no sympathy for the 2016 NFL Offensive Rookie of the Year and that it was a sign of weakness for the leader of the franchise.

After Bayless’ comments were blasted on Twitter, Fox issued a statement praising the quarterback and saying it didn’t agree with what Bayless said.

“We have addressed the significance of this matter with Skip and how his insensitive comments were received by people internally at FOX Sports and our audience,” the network said.

Asked whether he should hide such feelings as a leader, Prescott said no.

“I think that is a fake leader,” said Prescott, who starts his fifth season Sunday night in the first game at the new home of the Los Angeles Rams. “Being a leader is about being genuine and being real. Before I even lead, I have to make sure my mind is in the right place to do that and lead people to where they want to be. I think that is important — to be vulnerable, to be genuine and to be transparent.”

Prescott said in the TV interview he thought he might be experiencing depression just a few days before his older brother’s death. Prescott said he hadn’t been sleeping well before his father woke him up from one of his best nights of sleep in a long time with news of Jace Prescott’s suicide.

“I mean, obviously tears and tears and tears,” Dak Prescott said. “I mean, I sat there and tried to gather what had happened and wanted to ask why for so many reasons. As much as you want to ask why as much as this, I mean, I know my brother, and as we said, he had a lot of burdens on him.”

Prescott said he hopes he can help others by acknowledging a difficult offseason mentally. He also had an unsettled situation with his contract, and didn’t get a long-sought multiyear deal that will be worth more than $100 million if it ever gets completed. The two-time Pro Bowler is playing this season on the $31 million franchise tag.

In part because of that huge pay raise (he made $2 million in the last year of his rookie deal), Prescott is quick to say he knows many others were struggling with similar emotions in the pandemic.

“I don’t want to sit here and dwell on the things that were a struggle for me when I know I’m very fortunate and blessed and other people have it much more worse,” he said. “But just to be transparent about it, that even in my situation, emotions and those type of things can overcome you if you don’t do something about it.”

NOTES: Coach Mike McCarthy said WR Amari Cooper (hamstring) and CB Chidobe Awuzie (knee) were on track to play against the Rams. They have been listed as full practice participants on the injury report. ... RT Cameron Erving is listed as the starter with La’el Collins out at least the first three games with a hip injury.