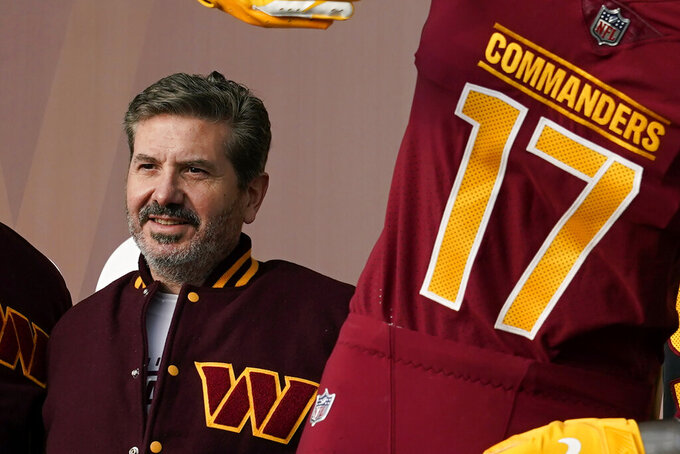 FILE - Washington Commanders' Dan Snyder poses for photos during an event to unveil the NFL football team's new identity, Feb. 2, 2022, in Landover, Md. Part or all of the NFL’s Washington Commanders could soon be for sale, after owners Dan and Tanya Snyder said they have hired Bank of America Securities to “consider potential transactions.” The team announced the surprising decision Wednesday, Nov. 2, 2022. (AP Photo/Patrick Semansky, File)

After repeatedly saying he would never consider giving up the football team he rooted for as a child and has owned for more than two decades, Dan Snyder and wife Tanya have taken the first step toward selling the Washington Commanders.

The team announced the surprising decision Wednesday that the Snyders hired Bank of America Securities to “consider potential transactions." Asked if the Snyders were considering selling part or all of the team, a spokesperson said, “We are exploring all options.”

Retaining the investment bank’s services could mean a full sale amid mounting pressure and multiple ongoing investigations or bringing on new investors more than 18 months after the Snyders bought out the previous minority owners. It's the first indication Snyder has given that he'd even consider selling the team.

BofA Securities has handled other sales of professional sports teams, including Steve Ballmer buying the NBA's Los Angeles Clippers in 2014. A message sent to the firm seeking additional comment was not immediately returned.

The Commanders are worth an estimated $5.6 billion, according to Forbes — a sevenfold increase over the then-record $800 million Snyder paid for the team in 1999. That ranks sixth among the league’s 32 teams and would be more than the $4.65 billion Walmart heir Rob Walton paid for the Denver Broncos earlier this year.

It was not immediately clear how soon a possible sale could happen. Sports business experts suggested a year as a reasonable timeframe, although pre-approved bidders who lost out on the Broncos provide a starting point of potential owners if they are also interested in the Commanders.

League spokesperson Brian McCarthy said, “Any potential transaction would have to be presented to the NFL Finance Committee for review and require an affirmative vote by three-quarters of the full membership.” That means 24 of 32 owners.

In the statement announcing the decision, the team said, “The Snyders remain committed to the team, all of its employees and its countless fans to putting the best product on the field and continuing the work to set the gold standard for workplaces in the NFL.”

Coach Ron Rivera, asked after practice about the news, tried to keep the focus on football.

“I don’t know what that’s all about, but I do know we play the Vikings come Sunday,” Rivera said. “I cant tell you what’s going on or why they’re doing it, mostly because any conversation I have with them dealing with the organization is private between the two of us. But I do know they’re focused behind us in terms of preparing for this week to play the Vikings.”

Delpy Neirotti and others in the industry following the decision do not believe the Snyders would have publicly announced their move to hire an investment banking firm if they were simply looking to add investors and maintain a controlling interest in the team.

“When a team makes an announcement and hires an investment bank, it’s generally that at least a control sale is a possibility,” said Randy Vataha, president of sports investment advisory group Game Plan LLC. “It’s hard to tell where they’re going, but I would certainly think that one of the things that’s being looked at is selling the controlling interest.”

Delpy Neirotti said it was a good time to get out given that the values of professional sports franchises have skyrocketed, and she does not consider the distractions around Washington as anything that would detract from the final price.

Snyder's ownership in Washington has come under increased criticism after an investigation found a toxic workplace culture and prompted a $10 million fine and additional reviews that are ongoing. The league office and Congress are currently investigating various organizational issues, including allegations of sexual harassment and potential financial improprieties.

McCarthy said former Securities and Exchange commission chair Mary Jo White's investigation is ongoing and added there is no timeline for its completion.

Indianapolis Colts owner Jim Irsay said at a league meeting last month there was “merit” to removing Snyder, who has been accused of groping a team employee and of overseeing a workplace in which women were frequently harassed and demeaned.

It would take 24 of the other 31 owners to vote to remove Snyder, unless he voluntarily chose to sell the team that was renamed the Commanders earlier this year. After Irsay made his comments on Oct. 18, a team spokesperson said the Snyders wouldn't consider selling the franchise.

“We will have to see how this unfolds, but this could obviously be a big step towards healing and closure for the many brave women and men who came forward,” they said in a statement.

The team has won just two playoff games during Snyder's 23 years as owner and has among the worst records in the league over that span.

The Snyder family took full control of the team in March 2021 after buying out the 40.5% stake of Washington Football Inc. owned by Fred Smith, Dwight Schar and Bob Rothman.