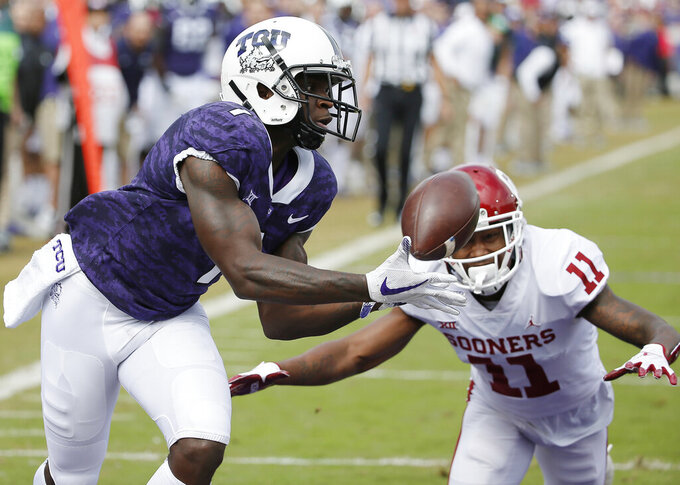 FILE - In this Oct. 20, 2018, file photo, TCU wide receiver Jalen Reagor (1) catches a pass in the end zone for a touchdown as Oklahoma cornerback Parnell Motley (11) defends during the first half of an NCAA college football game in Fort Worth, Texas. Reagor was selected by the Philadelphia Eagles in the first round of the NFL draft. (AP Photo/Brandon Wade, File)

Jalen Reagor’s speed, versatility and athleticism stood out for the Philadelphia Eagles.

The Eagles selected the TCU wide receiver with the 21st overall pick in the first round of the NFL draft Thursday night, giving quarterback Carson Wentz a deep threat.

Reagor was the fourth of six receivers selected in the first round. LSU’s Justin Jefferson went to Minnesota right after Reagor. Eagles executive vice president and general manager Howie Roseman compared this crop of wideouts to going to a donut shop.

“There were a lot of different flavors,” Roseman said. “Everyone had their favorite type. There was a lot of debate and discussion at that position. Jalen fits something we were looking for. He’s an explosive guy as a receiver, as a returner. He’s explosive with the ball in his hands.”

Reagor has plenty of confidence.

“I can do anything. I can play any position,” he said. “When I’m on the field, it’s more than 11 players on the offense.”

“He can definitely stretch the field, he can elevate, he can catch balls above the rim, he has the flexibility to play outside and inside and has return ability,” Eagles coach Doug Pederson said.

The Eagles had major issues at receiver last season when DeSean Jackson, Alshon Jeffery and Nelson Agholor combined to miss 24 games. Second-round pick J.J. Arcega-Whiteside stayed healthy but struggled to produce as a rookie, catching 10 passes. Greg Ward came off the practice squad and ended up the team’s most reliable wideout down the stretch as Philadelphia won the NFC East.

Agholor is no longer with the Eagles. Jackson is 33 and coming off surgery for a core muscle injury that limited him to one full game. Jeffery is 30 and is also coming off surgery, his for a Lisfranc fracture suffered in December.

The Eagles haven’t had a wide receiver with 1,000 yards receiving since Jeremy Maclin in 2014. They didn’t have one with 500 yards last season when Wentz led the team to four straight wins in December to clinch the division title.

Reagor is excited about playing with his new quarterback.

“It’s Carson Wentz. His name speaks for itself,” Reagor said. “Just the fact I get to be alongside those guys, it’s surreal. I watched Carson Wentz. This dude is amazing. Now he’s my quarterback.”

Reagor is the son of Montae Reagor, a defensive lineman who played nine seasons in the NFL, including seven games with the Eagles in 2007.

“It’s a family environment,” Jalen Reagor said. “They love their Eagles. I’m so blessed. What a great organization to come to.”

Philadelphia has seven remaining picks, including No. 53 in the second round, No. 103 in the third round and three choices in the fourth round.