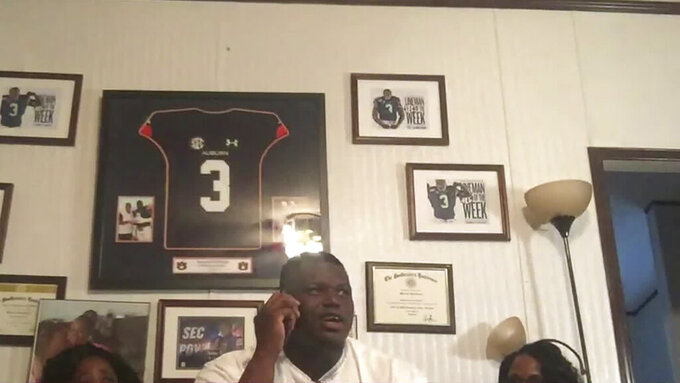 In this still image from video provided by the NFL, Marlon Davidson talks on the phone and is selected by the Atlanta Falcons during the second round of the NFL football draft, Friday, April 24, 2020. (NFL via AP)

ATLANTA (AP) — The Atlanta Falcons added help for their offensive and defensive lines on the second day of the NFL draft.

General manager Thomas Dimitroff and coach Dan Quinn hope the versatility of each of the Falcons' draft picks adds to their value.

The Falcons maintained their focus on defense by taking defensive lineman Marlon Davidson from Auburn in the second round on Friday night. They added Temple center Matt Hennessy in the third round.

“It’s a line of scrimmage game,” Quinn said. “We wanted to address how those specific areas could improve.”

The Falcons addressed what Dimitroff said was the team’s biggest need by taking Clemson cornerback A.J. Terrell in Thursday night’s first round.

Davidson (6-3, 303) will join edge rusher Dante Fowler, who signed as a free agent, as additions to Atlanta’s pass rush. The Falcons ranked near the bottom of the league with only 28 sacks in 2019.

Davidson had 7.5 sacks and 12.5 tackles for loss for Auburn in 2019. The four-year starter at Auburn has the potential to contribute as an edge rusher or play inside on Atlanta’s defensive front.

“Wherever they put me I’m going to play it, because I’m just that versatile with my talents," Davidson said. “I can do it all. Coming off the edge. I can do whatever move you want me to.”

Hennessy could be developed as a future replacement for starting center Alex Mack. For 2020, at least, his best path to playing time could come at left guard.

“They just talked about position flexibility and being able to play all three interior spots,” Hennessy said of his conversations with the Falcons.

Quinn said no decision has been made about Hennessy's move back to center after the 2020 season.

For Dimitroff, the versatility of each lineman was important.

“The versatility, the leadership on and off the field is something we look forward to in the future,” Dimitroff said.

Terrell will be expected to make an immediate impact, perhaps as a starter. Veteran cornerback Desmond Trufant, Atlanta’s first-round pick in 2013, was released in a cost-cutting move on March 16.

Davidson said he was impressed by the Falcons' early draft moves.

“They’re getting some great guys,” Davidson said. “... The defense is going to be good next year, I promise you that.”

Terrell, an Atlanta native, joins Kendall Sheffield and Isaiah Oliver, selected in the last two drafts, as the leaders of a young cast of cornerbacks. The youth will be tested in the NFC South against two of the NFL’s most accomplished passers — Drew Brees in New Orleans and Tampa Bay’s Tom Brady.

Adding Terrell addressed only one item on Dimitroff’s defense-heavy priority list for the draft. Other needs included defensive tackle and another edge rusher.

The Falcons also could add a linebacker on Saturday, when they have two picks in the fourth round and one in the seventh.

Dimitroff filled the team’s most glaring holes on offense earlier in the offseason by trading with Baltimore for tight end Hayden Hurst and signing running back Todd Gurley to a $6 million, one-year deal. Gurley, who played five seasons with the Los Angeles Rams, replaces Devonta Freeman, who was released.

The Falcons’ most expensive addition was Fowler, the outside linebacker who was signed to a $48 million, three-year contract.

Dimitroff and coach Dan Quinn are looking for players to make an immediate impact after the Falcons’ second consecutive 7-9 finish. Quinn saved his job with four straight wins to finish 2019. The pressure is on the coach and GM to make the playoffs this season.