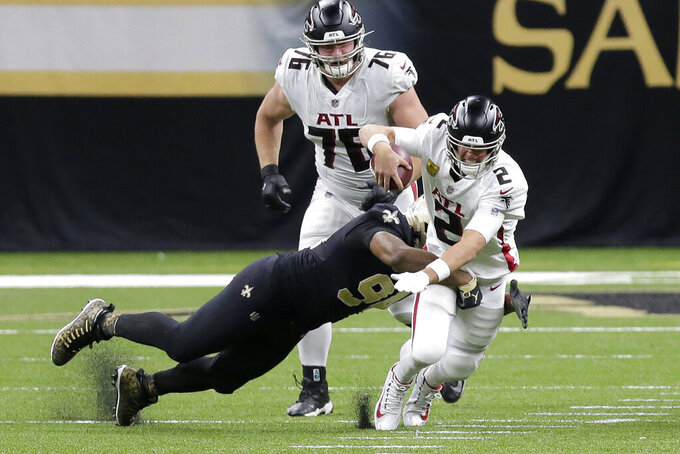 It was a familiar feeling.

After sacking him nine times when the teams met last November in Atlanta, the surging Saints had eight more on the way to a comfortable 24-9 victory against the Falcons. Those are the two highest totals in Ryan’s 209-game NFL career (counting playoffs), and the latest sack party sabotaged any chance for the Falcons to maintain their recent momentum.

Atlanta had won three of its last four, with the only loss by a point to Detroit, which scored the winning touchdown with no time left. The Falcons also had a bye last week, giving them extra rest and time to prepare for a Saints squad that came in riding a six-game winning streak.

“They are playing well,” Ryan said of the Saints. “There’s no doubt about it. Tip your hat to them.”

All but two of the sacks were on third down, and one of the costliest was right before halftime. With the Falcons at the Saints’ 39 and trailing 10-9, Ryan held the ball too long. Defensive end Cameron Jordan dropped him for an 8-yard loss, taking the Falcons out of field goal range.

Younghoe Koo, who had converted 51- and 52-yard kicks earlier in the quarter, stayed on the sideline while safety Marcus Williams intercepted Ryan’s long pass at the goal line on the final play of the half.

“The sack numbers got out of whack because of how well they played in their coverage, but really it was not a lack of protection or a lack of discipline or busted assignments,” Atlanta interim coach Raheem Morris said. “They were absolutely covering our wideouts. They did a nice job of playing underneath coverages and sitting on routes. They were really taking away some things we like to do.”

The second half was more of the same. After the Saints scored to go ahead 17-9, linebacker Demario Davis sacked Ryan on the Falcons’ first snap. Defensive tackle Daniel Onyemata sacked him two plays later, forcing a quick three-and-out.

Atlanta never scored again, failing to get a touchdown for the first time since Dec. 3, 2017 in a 14-9 loss to Minnesota.

“We work hard, and our responsibility as an offense is to score touchdowns,” Ryan said. “We were not very good today. We’ve got to be better next week.”

New Orleans has allowed one touchdown in its last three games combined. Jordan registered three of the Saints’ sacks, running his career total against Ryan to 21, the most by a player on one quarterback since sacks became an official NFL stat in 1982.

Trey Hendrickson added two, giving him 9 ½ for the year, and Onyemata had a pair of sacks, too.

New Orleans also held Atlanta to 52 yards rushing on 14 carries, extending its streak of not allowing an individual runner to gain 100 yards to 53 games.

“Our idea is to pressure Matt Ryan to get him off his spot to make him feel uncomfortable in the pocket,” Jordan said, noting the defense’s confidence is at a “supreme high.”

The Falcons reached the Saints’ 10-yard line on their opening possession but settled for a 28-yard field goal. They never crossed the New Orleans 30 the rest of the way.

“We really came out and got things going like we wanted to and went right down the field, but we weren’t able to punch it in, ” Morris said. “You’ve got to score touchdowns in those situations.”

Even with the Saints missing top cornerback Marshon Lattimore, Ryan finished 19 of 37 for 232 yards with two interceptions. Factor in the sacks, and the Falcons’ passing total shrank to 196.

The pressure on Ryan "was key without one of our starting corners. That was impressive,” Saints coach Sean Payton said. “We did a good job of keeping it in front of us. ... We contested a lot of passes. I thought we were very good on the back end.”

The Falcons played most of the game without wide receiver Julio Jones, who re-aggravated a hamstring injury that made his availability questionable. He had a 17-yard catch in the first quarter and a 22-yarder in the fourth but was on the sideline for a long stretch in between.

“It’s hard to replace that production, and it also changes how teams defend us, but it’s not an excuse,” Ryan said. “We have to find a way with the guys we have out there to be productive.”