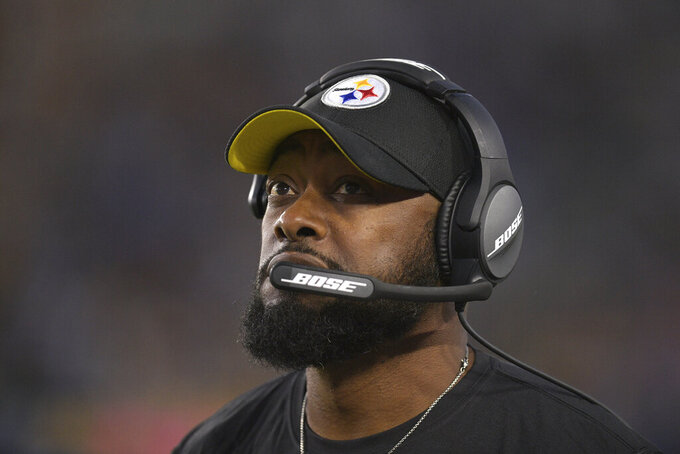 Pittsburgh Steelers head coach Mike Tomlin watches from the sidelines during the first half of an NFL football game against the Los Angeles Chargers, Sunday, Oct. 13, 2019, in Carson, Calif. (AP Photo/Kyusung Gong)

PITTSBURGH (AP) — Mike Tomlin's expression and the circumstances surrounding it summed up the plight of his injury-ravaged team perfectly.

"Seriously, guys?" the Pittsburgh Steelers coach said when asked if Mason Rudolph would be the quarterback after being cleared of the NFL's concussion protocol.

It's a question that seemed preposterous six weeks ago. Of course, back then Ben Roethlisberger's right elbow was healthy, Rudolph was simply relieved to beat out Josh Dobbs for the right to serve as Roethlisberger's understudy and Devlin "Duck" Hodges was looking for work after being cut at the end of training camp.

How quickly things have changed. Roethlisberger has been relegated to the highest-paid mentor in the league after undergoing season-ending surgery in late September. Rudolph's last appearance on the field ended with him being knocked unconscious against Baltimore while Hodges — an undrafted rookie free agent — became the first champion duck caller from Alabama to win his first NFL start.

For a team that spent most of the offseason looking to avoid drama — much of it manufactured — after Antonio Brown and Le'Veon Bell left in the offseason, it somehow has found them anyway. And yet the Steelers (2-4) have tried to stay upbeat even with a revolving door under center and an offense that lacks the dynamic playmaking that once came so easily during the height of the "Killer B" era.

"We're not in style point mode," Tomlin said. "We're not even in personality mode. We just need to do what is required to move the chains, to ring up the scoreboard, to score one more point than our opponent in an effort to win football games."

Allow wide receiver JuJu Smith-Schuster to offer proof. Tasked with taking over as the top target following Brown's departure, Smith-Schuster's numbers have dipped drastically. A year removed from a 111-catch season, Smith-Schuster is on pace to barely reach half that total. Yet last Sunday night in Los Angeles, with running backs James Conner and Benny Snell Jr. churning out yards and chewing up the clock against the Chargers, Smith-Schuster was in offensive coordinator Randy Fichtner's ear telling Fichtner to keep the ball on the ground.

"You hear that from a wide receiver, it makes you proud," Fichtner said.

And it's an example of the "next man up" philosophy Tomlin has preached during his 12-plus years on the job. For his current group, it's a mantra the team has been forced to cling to for survival. Even though they're off to their worst start since 2013, the Steelers remain optimistic they can still be a factor in the AFC North. Yes, the first six weeks haven't gone according to plan — nowhere close, actually — but they are intent on focusing on the silver linings. The defense is near the top of the NFL in sacks and turnovers. Save for a 30-point beatdown at New England in Week 1, they've been competitive regardless of who is under center. Only three of their final 10 games are against teams currently with a record over .500.

While their margin for error is virtually nonexistent — particularly with defensive end Stephon Tuitt now out for the year after tearing a pectoral muscle against the Chargers — there is room for hope.

"We're not in the type of state where we can make any bold predictions about personality and things of that nature," Tomlin said. "We're going to do whatever is required for us to secure victory week in and week out."

Rudolph will be the starting quarterback when Pittsburgh hosts woeful Miami coming off the bye week, the start of a three-game homestand that includes visits from the underperforming Los Angeles Rams and the unpredictable Indianapolis Colts. Two wins in three tries would keep the Steelers in the mix heading down the stretch. Considering what they've been through so far, it's all they're really asking for and something that looks doable if the defense can continue to be disruptive.

Rookie inside linebacker Devin Bush has been a revelation and every bit worthy of the investment the team made when it traded up to grab him with the 10th pick in the draft. Bush already has two interceptions and four fumble recoveries, including a scoop-and-score in the first quarter against the Chargers that helped take some of the early pressure off Hodges.

"I think it has all come together for all of us as a unit," Bush said. "A lot of new faces out there. I think week in and week out, we keep taking our steps. We learn a lot about ourselves and how dominant we can be if we are all on the same page."

That page includes safety Minkah Fitzpatrick. The Steelers raised eyebrows when they acquired Fitzpatrick from the Dolphins in the aftermath of Roethlisberger's injury. The move sent the message the team wasn't bailing on the season even without its unquestioned leader. Fitzpatrick, like Bush, has provided an influx of heady swagger, which the Steelers know they'll need to rely on if they want to play meaningful football into December.

"We're in a fragile state from a health standpoint, from a depth standpoint," Tomlin said. "In the midst of that, we need to find ways to win football games."