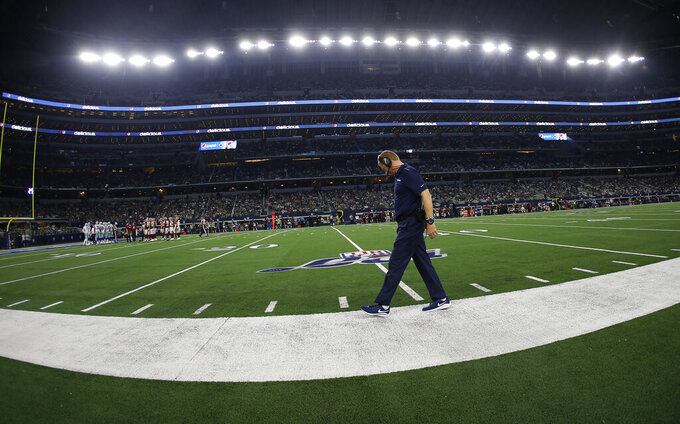 Dallas Cowboys head coach Jason Garrett walks the sideline during the second half of an NFL football game against the Washington Redskins in Arlington, Texas, Sunday, Dec. 15, 2019. (AP Photo/Ron Jenkins) 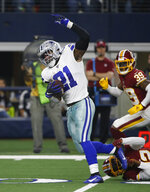 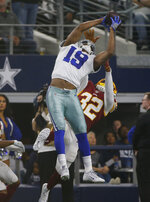 ARLINGTON, Texas (AP) — Jason Garrett says he doesn't know if he'll be coach of the Dallas Cowboys next year, and owner Jerry Jones won't even acknowledge that there's a decision to make regarding the leadership of an underachieving club.

The mystery of a team that sagged under the weight of high expectations now becomes the mystery of what happens to a coach who has an expiring contract and never took the Cowboys beyond the divisional round of the playoffs in nine full seasons.

The Cowboys were eliminated from the postseason despite a 47-16 win over Washington on Sunday because Philadelphia won the NFC East by beating the New York Giants.

Dallas (8-8) lost control of its postseason fate with a 17-9 loss to the Eagles last week. Now the fate of Garrett is in the hands of Jones.

“I have no idea,” Garrett said when asked after the game if he would be coach of the Cowboys for a 10th full season in 2020.

Jones turned aside numerous attempts to offer a timeframe on a decision, essentially saying any of those questions imply that he's made a decision when perhaps there isn't even a decision to make.

“I don’t have a shareable timetable," Jones said. "The proper question here is: ‘Do I have anything that I would share as far as my timetable, my thoughts or any work that I’ve done, we’ve done, any work preparing for the future?’ All of that I would not comment on or share at this time."

Dallas could have made the playoffs without a winning record for the third time in franchise history. Instead, the Eagles won the division for the second time in three years by beating the Giants 34-17.

Case Keenum had a TD toss as the Redskins (3-13) secured the No. 2 pick in the draft in what could be their final game under interim coach Bill Callahan. The former Dallas assistant replaced Jay Gruden, fired in October with Washington at 0-5.

“The thing that I know is that this team, this group of guys, this record is not indicative of the type of locker room this is, and the type of talent I think that we had,” said Keenum, who was 18 of 37 for 206 yards. with an early interception. “You can see there's a lot of different things that you could point your finger at. I'm going to point my finger at myself.”

About the time the Cowboys put away the Redskins on Prescott's second TD pass to Gallup for a 37-16 lead late in the third quarter, Philadelphia went up 10 with a TD after the Giants lost a fumble at their 2-yard line.

“I've never been disappointed after a win, to be honest with you. That was tonight,” Prescott said. He was 23 of 33 for 303 yards in his second straight game playing with a sprained right shoulder, looking much better than he did in the loss to Philadelphia.

In Gallup's first career game with multiple touchdowns, the second-year player had five catches for 98 yards.

Ezekiel Elliott, who helped fuel Super Bowl hopes by signing a $90 million extension to end a long holdout days before the opener, had a 32-yard touchdown run and a 13-yard scoring catch.

The Cowboys won their first three games after Elliott signed the big contract, but lost eight of the next 12 to put their postseason fate in the hands of the Eagles.

Dallas was hoping to build on the first playoff win for Prescott and Elliott last season before a divisional-round loss to the Los Angeles Rams that ended the club's 23rd consecutive season without reaching the NFC championship game.

It's the fourth time in Garrett's nine full seasons that Dallas has finished .500. The first three ran consecutively from 2011-13, with the Cowboys losing the finale each time when a win would have put them in the playoffs.

Elliott had 122 yards rushing to finish with 1,357. It will be the first time the two-time rushing champion has played a full season without leading the NFL in rushing.

Washington's Adrian Peterson, fifth on the career rushing list, had a 32-yard run to set up a second-half field goal and finished with 78 yards to put his total at 14,216 in his 13th season. The club has a 2020 option on the 34-year-old's contract.

Kai Forbath kicked four field goals, improving to 10 of 10 since the Cowboys cut Brett Maher after three critical misses in consecutive losses. Dustin Hopkins made all three of his, and could have had a couple more when the Redskins went for it on fourth down in easy field goal range twice in the first half.

Cowboys: CB Byron Jones missed a game for the first time in his career after injuring an ankle at practice during the week. ... Seven-time Pro Bowl LT Tyron Smith was out because of a back injury. It's the fourth consecutive season that Smith has missed three games. ... DE DeMarcus Lawrence was sidelined early by a rib injury and later ruled out with a back issue.

The season is over for both teams.