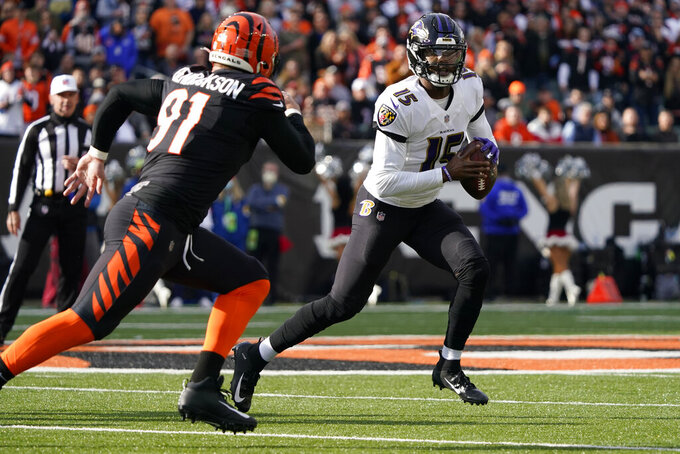 Cincinnati sacks leader Trey Hendrickson and three other starters are among five Bengals who were placed on the COVID-19 reserve list Tuesday.

Center Trey Hopkins and left guard Quinton Spain were sidelined along with safety Vonn Bell. The fifth player is linebacker Akeem Davis-Gaither, who has been out with a foot injury.

The Bengals (10-6) have clinched the AFC North title for their first trip to the playoffs since the 2015 season. Cincinnati has an outside chance to earn the AFC's No. 1 seed Sunday with a win over Cleveland and some help.

The NFL is allowing players to return five days after a positive COVID-19 test if they don't have symptoms. The reduction last week from the previous isolation time of 10 days includes unvaccinated players.

Hendrickson is fifth in the NFL with a career-high 14 sacks. Pittsburgh's T.J. Watt leads with 21½.

About the same number of players — approximately 20 — went on and came off the COVID-19 list Tuesday.

Arizona, which has qualified for the playoffs and can still win the NFC West, activated four players off the list and added two. The Cardinals play Seattle on Sunday.

Green Bay activated two starters in safety Darnell Savage﻿ and defensive lineman Kingsley Keke﻿, along with reserve tackle Dennis Kelly and backup receiver Amari Rodgers. Lineman Billy Turner went on the COVID-19 list. The Packers have locked up the No. 1 seed in the NFC going into their regular-season finale against Detroit.

San Francisco, which needs a win over the Los Angeles Rams or a New Orleans loss to reach the postseason, had two backups sidelined in defensive backs Dontae Johnson and Jimmie Ward.

The Browns placed running back D'Ernest Johnson on the COVID-19 list. Johnson has been a solid backup to Nick Chubb and Kareem Hunt, rushing for 411 yards and two touchdowns.

The Browns got linebacker Elijah Lee back off the COVID-19 list and activated quarterback Nick Mullens and safety Cedric Thompson off the practice squad COVID-19 list.