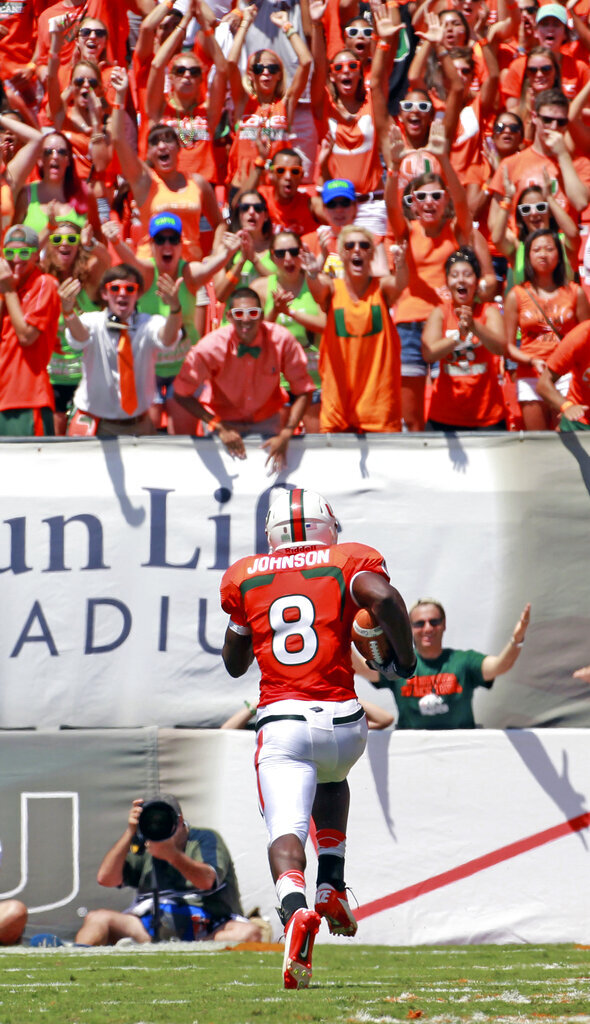 FILE - University of Miami's Duke Johnson scores a touchdown on a kick off return in first quarter as fans cheer as they play Bethune-Cookman's at Sun Life Stadium in Miami Gardens, Florida, Sept. 15, 2012. Johnson grew up practically in the shadow of Hard Rock Stadium, attending high school just a few minutes from the Miami Dolphins’ field. It was his home field in college, with the Miami Hurricanes playing there. And he’s hoping to play there again Sunday, Nov. 28, 2021, when his new team — the Dolphins — host the Carolina Panthers. (Charles Trainor Jr/Miami Herald via AP)

MIAMI GARDENS, Fla. (AP) — Duke Johnson is home for the holidays. And working.

For him, it’s the perfect scenario.

The veteran running back grew up practically in the shadow of Hard Rock Stadium, attending high school just a few minutes from the Miami Dolphins’ field. It was his home field in college, with the Miami Hurricanes playing there. And he’s hoping to play there again Sunday when his new team — the Dolphins — host the Carolina Panthers.

“I ended up home,” Johnson said, “which is definitely the biggest blessing I could have.”

Johnson’s Dolphins debut last weekend — four carries, 18 yards in a win over the New York Jets — marked his first playing time in nearly a year. He had a brief stint earlier in the season on Jacksonville’s practice squad, followed by an array of workouts with teams that didn’t generate an opportunity until the Dolphins finally brought him onto their practice squad.

They promoted him to the roster for last weekend, and on the fourth-quarter drive that basically ran out the clock and sealed the win Johnson got three carries, meaning he came through in a clutch moment.

“The biggest thing always in the transition for someone that comes in in the middle of the season is terminology,” Dolphins running back coach and co-offensive coordinator Eric Studesville said. “That’s the biggest hurdle that guys have who come in. It’s still X’s and O’s and people are lined up in the same places, but what we call things is different and that transition takes a little bit of time. But I think he’s worked at it. He’s gotten into it. He’s a smart guy.”

It took a long time to get back.

Growing up in Miami, he idolized some of the best the Dolphins ever had — names like Zach Thomas, Jason Taylor and Ricky Williams. He’s always considered himself a Dolphins fan, because in his eyes that’s what people from Miami are supposed to be.

“Anything Miami typically. Heat, Marlins, Panthers, Dolphins,” Johnson said. “So, I’m a Miami guy. Went there. Miami Hurricanes. I’m Miami through and through.”

He’s only 28 and believes there’s a lot of football left in him. Johnson spent his first four seasons with the Browns, then 2019 and 2020 with Houston. The Texans cut him in February, and Johnson was looking for a place to play ever since.

It was a bittersweet experience. On one hand, he was unemployed. On the other, spending time at home had obvious benefits.

“He’s got a physical presence," Studesville said. “He hits the hole downhill aggressively, attacks the line of scrimmage. He did a nice job on one of the pass protections that we had scanning across. I was very pleased with him and happy for him because he has put in a lot of work and I think he maximized the opportunity that he had.”