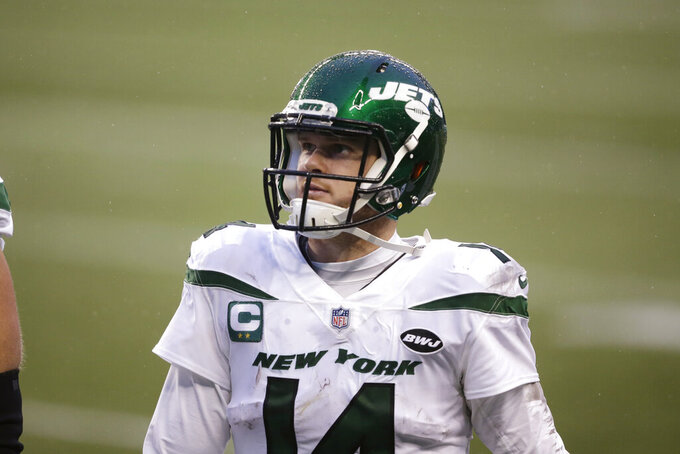 New York Jets quarterback Sam Darnold walks off the field after the team lost to the Seattle Seahawks in an NFL football game, Sunday, Dec. 13, 2020, in Seattle. (AP Photo/Lindsey Wasson)

NEW YORK (AP) — Dowell Loggains has watched and worked with many quarterbacks in his 13 years coaching in the NFL, so he knows a good one when he sees one.

And in the New York Jets offensive coordinator's eyes, that still remains the case with Sam Darnold.

“I think Sam Darnold's a young player and his story hasn’t been written,” Loggains said Thursday. “He’s going to be a really good player in this league. I have all the faith in him. I know his teammates do. And I know it’s close for him.”

Whether Darnold ever meets that potential, however, remains a major question. And if he does, it's looking increasingly more likely that it will happen with someone other than the Jets.

New York is winless at 0-13 and in prime position to end up with the No. 1 overall pick in the draft in April. Clemson's Trevor Lawrence would seem a lock to be taken first, but it's not out of the question that New York could look to another quarterback — perhaps Ohio State's Justin Fields — even if it finishes with the No. 2 pick.

That would leave Darnold, the No. 3 overall choice in 2018, a part of the franchise's past rather than the future. But Loggains believes the 23-year-old quarterback still has lots of potential, despite his massive struggles.

“I see it every day,” Loggains said. “I see his talent every day. I see the ability to make throws that are extremely accurate and the ability every day to extend plays and get out of harm’s way and to do things that very few guys can do.

Statistically, Darnold's numbers are dreadful this season — a sign he has regressed in two seasons under Loggains and coach Adam Gase.

Darnold has thrown just five touchdown passes with nine interceptions in nine games. His 67.3 quarterback rating is the worst in the NFL and his 58.4% completion rate is higher than only Philadelphia's Carson Wentz (57.4%) and Denver's Drew Lock (57.3%) among quarterbacks who have thrown a minimum of 14 passes per game. Darnold is also averaging a career-low 173.3 yards per game.

There have also been questions about his mechanics and footwork, as well as his tendency to make ill-advised throws. Darnold's performance, the Jets' lack of playmakers, injuries and inconsistent play-calling have all led to the Jets ranking last in overall offense this season.

“As far as the quarterback play, it’s about getting the other 10 guys around you to play well sometimes,” Loggains said. "You have a big part in that and it’s your coaches putting you in good spots and Sam wants to carry all the burden himself. It’s always, ‘I have to play better. I need to make a better decision. I need to throw that ball away.’ So, I can speak to his character enough how mentally tough he is.

“He’s as mentally tough as a player I’ve ever been around.”

Darnold has three more games left this season, and possibly in his tenure with the Jets. While the speculation swirls outside the team's facility, Darnold remains focused on simple goals.

“Just being consistent, moving the ball up and down the field and scoring points,” he said.

That has been a lot easier said than done, and Darnold and the Jets next face Los Angeles Rams' Aaron Donald-led defense that ranks No. 1 in the NFL.

“We always tell Sam, ‘Hey, you’re an artist, not a blacksmith,’” Loggains said. “That’s part of playing quarterback is paint the canvas the way you see it. But it’s also you have to know what strengths that the other team has and how they’re going to attack your weaknesses.”

For Darnold, that means trying to play a clean game and not forcing things. And the quarterback getting help from his coaches and teammates.

“This team has the ability to make you look really bad if you’re careless with the football or you’re careless with the shot clock in your head of holding onto the ball and those things,” Loggains said of the Rams. “You have to play with anticipation versus this team and and we need to do a good job as coaches of knowing when we can and can’t take our shots and make sure we put Sam in a good situation that way.”

NOTES: DL Folorunso Fatukasi was placed on the reserve/COVID-19 list and will miss the game Sunday after having what was deemed close contact with someone outside the organization who tested positive for coronavirus. ... RB Frank Gore had his usual veteran's rest day. ... WR Jamison Crowder (calf) was limited after not practicing Wednesday. ... S Marcus Maye (rib) was also limited.