McCoy won't allow himself to get overhyped against Bucs 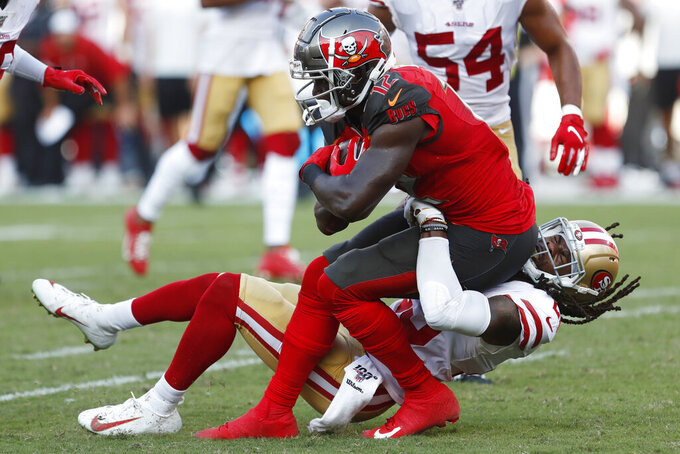 CHARLOTTE, N.C. (AP) — Panthers defensive lineman Gerald McCoy won't allow himself to get overhyped when he lines up Thursday night against his former team, the Buccaneers — even though he has plenty of motivation.

After nine full seasons in the NFL, McCoy said he knows better.

He said a lot of those players didn't play well because of their emotions clouded their ability to focus on making plays.

Still, McCoy admits he's eager to play the Buccaneers, a team that cut him in May after a nine-year stint where he was selected to six Pro Bowls, was an All-Pro and became the face of the franchise.

McCoy's departure from Tampa Bay did not come without some bad feelings.

There are still people at Buccaneers headquarters McCoy doesn't like, adding that they "know who they are."

It all started when new Bucs coach Bruce Arians said during the offseason McCoy was "not as disruptive as he was four years ago." Arians ultimately released McCoy and, a few days later, signed free agent Ndamukong Suh to replace him — and promptly gave him McCoy's No. 93.

"At first, it bothered me, I can admit that," said McCoy, who now wears No. 93 in Carolina.

McCoy let it be known publically he was disappointed over that decision, which drew the ire of former Buccaneers defensive tackle Warren Sapp. Sapp has been someone McCoy initially considered a mentor, and later "family."

"You get measured by playoff wins," Sapp told the Tampa Bay Times in August. How many playoffs did you win? He never was in a playoff game. We were in nine. We won championships. ... You deserve something like this? Bad call, young fella."

When asked this week if Sapp's comments hurt, McCoy simply shrugged his shoulders.

The 31-year-old McCoy still plans to sign a one-day contract and retire as a member of the Buccaneers when he calls it quits. He said that has been prearranged with Bucs ownership.

As for how he views his legacy in Tampa Bay, McCoy said "I don't know ... ask Warren Sapp."

Tampa Bay is bracing for a big dose of Christian McCaffrey, who ran for 128 yards and two touchdowns and also had 10 receptions for 81 yards in the Panthers' opener.

Arians called McCaffrey the best dual back threat in the NFL.

"I used to think it was David Johnson, but Christian's passed him up," Arians said. "As a receiver, he's a hell of a matchup problem, and as a runner, he's a great runner."

Bucs defensive coordinator Todd Bowles agreed, saying "I don't think you can stop him with one guy. ... They are very talented across the board. We've just got to play disciplined football."

Bucs QB Jameis Winston became Tampa Bay's career passing leader last week. He also tossed three interceptions, two of which were returned for touchdowns in a 31-17 loss to San Francisco. Offensive coordinator Byron Leftwich expects the fifth-year pro, who threw for 249 yards and two touchdowns in a 24-17 victory over the Panthers late last season, to respond with a sharper performance Thursday night.

"That's what this league's all about. You can't have any hangovers, no carry-overs, so he's just got to stay locked in," Leftwich said. "The good thing is we had to (begin preparation) the next day and get to rolling with this game being so quick."

Arians believes one of the best things the Bucs can do to help Winston cut down on turnovers and realize his potential as the No. 1 overall pick from the 2015 draft is run the ball more effectively.

With second-year pro Ronald Jones II leading the way, Tampa Bay rushed for 121 yards in last week's loss. Jones, coming off a disappointing rookie season, ran for 75 yards against the 49ers, finally showing signs of why he was selected in the second round of the 2018 draft.

He was impressive, but apparently not good enough to crack the starting lineup. Peyton Barber, an undrafted free agent who led the team in rushing the past two years, will line up first against the Panthers.

"If Peyton gets a little tired, he will get (Jones) in there," Arians said. "And if he has the hot hand, he stays in there until he gets tired."

Panthers coordinator Norv Turner said he wanted to cut down on McCaffrey's reps, but not his touches this season. Well, McCaffrey not only got 29 touches in a Week 1 loss to the Rams but also played all 67 offensive plays. Coach Ron Rivera said the Panthers will need to think about limiting his reps moving forward, but quickly added "When he's playing the way he is, you want to keep the rhythm going."

Both the Panthers and Buccaneers have moved to a 3-4 defense this season, which should make for an interesting matchup. Neither unit looked particularly invincible in the season opener with the Bucs giving up 31 points and the Panthers 30.