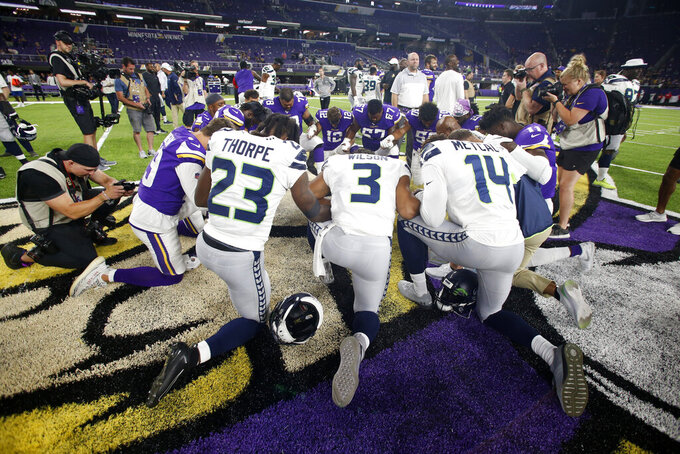 Players kneel on the field after an NFL preseason football game between the Minnesota Vikings and the Seattle Seahawks, Sunday, Aug. 18, 2019, in Minneapolis. The Vikings won 25-19. (AP Photo/Bruce Kluckhohn)

SEATTLE (AP) — There is an unusual and notable lack of noise surrounding the Seattle Seahawks.

The loud personalities of the past are gone. There are no contract disputes. The general buzz around the franchise is at a murmur. There are no outlandish Super Bowl expectations, but there remains a belief Seattle is a good team that should be in the NFC playoff conversation.

After years when Seattle was among the loudest teams in the NFL, it's a stark change.

"We had so many names that people were paying attention to that were doing so many different things that it's just kind of different now. ... I think a little bit of that, too, is I think the league is sleeping on our team," Seattle linebacker Bobby Wagner said.

"They kind of did it last year, but we had lost so many players there was no expectation. This year kind of has that same vibe, but we know what we've got in our locker room and know how good our team can be."

Last season was supposed to be the transition year in a remodel. Instead, the Seahawks found a formula that worked with a revitalized run game, an efficient Russell Wilson, and a defense that while taking a step back from the past was still good enough for Seattle to win 10 games and earn a wild-card berth.

Seattle should be able to pick up where it left off, but might not be ready to challenge the Rams in the NFC West. The Seahawks' offense could be dynamic with a run game led by Chris Carson and an experienced, veteran offensive line, but will need to find a replacement for the loss of go-to wide receiver Doug Baldwin. Seattle has one of the best linebacker groups in the NFL led by Wagner, and may have solved its questions about the pass rush by acquiring Jadeveon Clowney from Houston to pair with Ezekiel Ansah coming off the edge, hoping the duo can be the disruptive answer.

The Seahawks seem to be equal parts potential and questions going into the 10th season with Pete Carroll in charge.

"I'm hoping we can be a very complete team," Carroll said. "In years past, we've been able to be good at a lot of areas and it's hard to find a way to get at us."

Here's what else to watch for the upcoming season:

The Seahawks avoided a major distraction by locking up Wilson to the richest contract in league history in April. With his long-term future set, Wilson can focus on building off one of his most efficient seasons. With Seattle producing the best run game in the NFL, Wilson set career highs in touchdown passes (35) and passer rating (110.9) while matching his career low with seven interceptions. Wilson threw for only 215 yards per game, but that number was similar to the two seasons when he helped lead Seattle to NFC titles.

Wilson's task will be finding a new No. 1 wide receiver. Tyler Lockett is coming off a career year, but Baldwin often drew coverage, leaving Lockett open. Look for rookie DK Metcalf to be another favored target, but minor knee surgery during training camp could slow his start.

Wagner also got a contract extension at the start of training camp that keeps the four-time All-Pro as the center of Seattle's defense going forward. Wagner will team with K.J. Wright and Mychal Kendricks to form what could be the best linebacker trio of Carroll's tenure. There is depth as well with promising rookie Cody Barton. The three starters will be asked to make plenty of plays with questions elsewhere on the defensive side.

Seattle lost its primary pass rusher when Frank Clark was traded to Kansas City, sending away 13 sacks to acquire more draft picks. The Seahawks will also be without Jarran Reed and his 10½ sacks for the first six games because of a suspension. If healthy, Ansah can be part of the answer. He's two years removed from having 12 sacks in 14 games, and Seattle needs that kind of production. The trade for Clowney may end up being a one-year rental, but is a proven asset that will bolster the pass rush and help draw attention away from Ansah. Clowney had 18½ sacks combined the past two seasons. Pass rush will be key to take pressure off a secondary that was exposed at times last season.

For a rare change, the offensive line is not a concern. Seattle returns four of five starters, with veteran Mike Iupati stepping in for J.R. Sweezy as the one change among the starting five. Left tackle Duane Brown continues to play extremely well going into his 12th season. Germain Ifedi has matured at right tackle and is entering a contract season. And right guard D.J. Fluker is a massive run-blocking star if healthy.

If Seattle can handle a midseason stretch of challenging tests it could benefit from playing three of its final five games at home, including the final two weeks against division foes San Francisco and Arizona. But the Seahawks face a tough stretch from Weeks 5 thru 10 with road games at Cleveland, Atlanta and San Francisco to go with home games against the Rams, Baltimore and Tampa Bay.