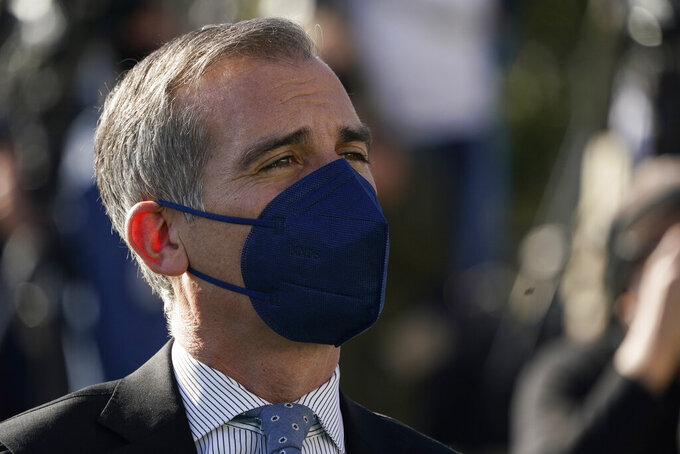 LOS ANGELES (AP) — Three days after being photographed without a face mask at the NFC championship game, Los Angeles Mayor Eric Garcetti joined other officials Wednesday to urge fans headed for the Super Bowl to strictly adhere to pandemic safety protocols that include staying masked, except while eating or drinking.

The Los Angeles area continues to see high levels of COVID-19 infections, and ticket holders ages 5 and older must show proof of vaccination or a recent negative COVID-19 test to enter. Under a Los Angeles County health order, masks are required at all times, with limited exceptions.

The biggest challenge at the Super Bowl might not be on the field, with officials acknowledging there was no way to constantly police 70,000 people. At the championship game Sunday at SoFi Stadium near Los Angeles, where the Super Bowl will be played, thousands of fans openly disregarded the mask mandate.

“You can’t force everybody to wear a mask all the time,” said James Butts, mayor of Inglewood, where the stadium is located. “In the end, it’s the responsibility of the people to take care of themselves, their families and their friends. And that’s the simplest way I can put it.”

Slipping off a mask to take a bite of a snack “doesn’t mean buy a bucket of popcorn and eat it for two hours,” warned Russ Simons, senior adviser of facilities at the stadium. "The staff is on hand to remind people to mask up."

Garcetti wasn't alone in facing criticism for shedding his mask last weekend, if even for a moment. Gov. Gavin Newsom and San Francisco Mayor London Breed also were photographed without masks at the game. The three Democrats were accused of hypocrisy for lecturing residents about dutifully wearing masks in public, while the pictures from the game that circulated widely online suggested they set different rules for themselves.

Newsom, like Garcetti, said he removed his mask only briefly during the game, though photographs online showed him wearing his mask at times in his seat, at other points not.

Los Angeles County has imposed some of the most restrictive pandemic rules in the nation, yet it also has seen among the highest rates for infections and deaths in the state of 40 million.

Los Angeles Public Health Director Barbara Ferrer said her office continues to review pandemic data and she didn't rule out the possibility that the county could drop or amend the mask rule, with the Super Bowl more than a week away.

“Transmission is super high here. And we’ve got to get to lower rates before it makes sense to be taking off our masks,” she said.

When asked why the SoFi mask requirement made sense, when millions of people have attended NFL games this year, including in places without strict mask rules, Ferrer didn't answer directly. She suggested risk for transmission remained high in large venues, and emphasized that determining where a person became infected can often be difficult, if not impossible.

"They don’t make a difference when they’re not consistently followed or enforced,” she said. “I strongly believe individuals should be allowed to make an informed choice about whether to mask up or not.”

Garcetti pushed back any suggestion that he endangered anyone by briefly slipping off his mask at the game, while, by his account, holding his breath.

“There is a zero percent chance of infection from that,” the mayor said. “I put my mask right back on ... to make sure that there is no spread. And I think that we should all follow that advice until we’re out of this period.”

“People do have a good common sense in this city and around this country,” he added.