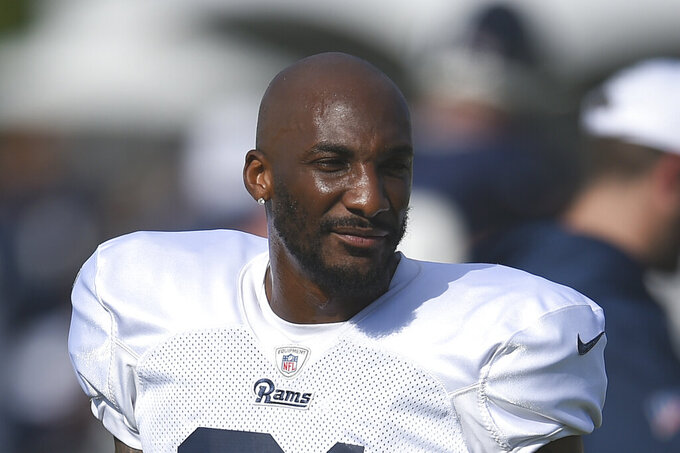 FILE - In this July 30, 2019, file photo, Los Angeles Rams cornerback Aqib Talib is shown during NFL football training camp in Irvine, Calif. The Los Angeles Rams have traded injured cornerback Aqib Talib and a fifth-round pick to the Miami Dolphins for an undisclosed future draft choice. The Rams on Tuesday, Oct. 29, 2019, confirmed the deal first reported by ESPN. Talib is on injured reserve with a rib injury, and the veteran defensive back might not play again this season. (AP Photo/Kelvin Kuo, File)

LOS ANGELES (AP) — The Los Angeles Rams traded cornerback Aqib Talib and a fifth-round pick in 2020 to the Miami Dolphins on Tuesday for an undisclosed future draft choice.

The 33-year-old Talib is on injured reserve with a rib injury. The 12-year veteran defensive back might not play again this season, and might never play for the rebuilding Dolphins, who continue to stockpile draft picks.

Talib played in eight regular-season games last year and five more this year, making just one interception and struggling with injuries in both of his seasons with the Rams. But he returned last year to start all three playoff games for Los Angeles, including the Super Bowl.

While his playing contributions to the Rams weren't huge, the five-time Pro Bowl selection made an impact on the Rams' locker room culture with his leadership, according to players during both seasons. The once-volatile defensive back served as a mentor to his younger teammates when healthy or injured.

The Rams (5-3) have traded both of their starting cornerbacks this month, and they have already parted ways with three of their four secondary starters in last season's Super Bowl. The fourth, safety John Johnson, is on injured reserve.

Los Angeles shipped cornerback Marcus Peters to the Baltimore Ravens two weeks ago to clear room to acquire Jalen Ramsey from Jacksonville. This trade of Talib might have been made to free up salary cap room for another deal — or to sign Ramsey to a contract extension.

Safety Eric Weddle, who joined the Rams as a free agent before this season, is the only remaining healthy starter in the secondary from the Rams' season opener. Ramsey has played well in two games since his arrival, and veteran backup cornerback Troy Hill moved into Talib's starting spot three games ago.

The Rams are in their bye week after back-to-back victories. They play at Pittsburgh next weekend.

The winless Dolphins could use secondary help, but Talib isn't eligible to return until Week 15 and might not be healthy then.

"We'll just see where that's at," Miami coach Brian Flores said. "There are a lot of things we have to assess and evaluate."

Miami's 2018 Pro Bowl cornerback, Xavien Howard, was placed on injured reserve Tuesday with a knee injury that bothered him in recent weeks.